There’s been quite a few Star Wars exhibitions in Tokyo over the years, particularly in recent times since the Disney takeover. Whilst rummaging through some old boxes during the soft lockdown a few months ago I came across the ticket and flyer for one that I had completely forgotten about going to 15 years ago.

2005 was a time when I was certainly a Star Wars fan but my fandom was yet to grow to the levels of later years in the wake of 2008’s ‘Star Wars Celebration Japan‘ and my filming location pilgrimage to Tunisia in 2009. The theme back then was the Art of Star Wars Episode 3 which coincided with the release of “the final film in the saga”! Hmmm, I think I’ve heard a very similar tagline used since then!

This was actually a double exhibition taking place in two Tokyo locations; Meguro Museum of Art and Tokyo International Forum. The latter was 2400 yen for adults and the former was 1400 yen. Talk about milking it for all it was worth! 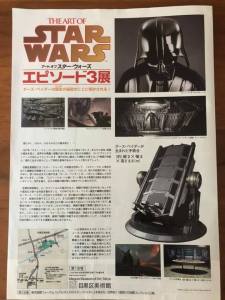 These days I’d probably moan about the price and then stump up the cash to go to both whilst probably getting some exclusive merchandise too from the ubiquitous souvenir shops. Back then though I opted for the cheaper one in Meguro only which was themed around the creation of Darth Vader. 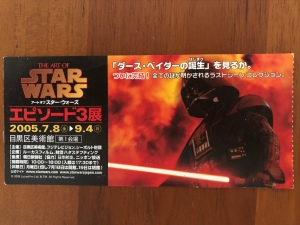 How have I still got my ticket?! I was surprised to find it!

At that time, the dark lord was being used in a promotion with a couple of Japanese schoolgirls for au mobile phones, and I saw a billboard for it on my way to the museum.

Although mobile phones had cameras back then it was still a few years before they improved significantly with the introduction of smartphones. Photography was not allowed anywhere in the exhibition other than in front of the entrance so the shot below is the only picture I have from my trip.

It may not look like it but there was an exhibition going on beyond this poster wall!

Various works such as sets and props were part of the exhibit. The operating tables where Darth Vader was born and Padmé died during birth were both present and there were also life-size models of the Wookiees as well as a few other characters. Other than Chewbacca we had never seen another Wookiee outside of the infamous ‘Star Wars Holiday Special‘ from 1978.

See that operating table behind Vader? Well, that was on show in Meguro

‘Episode III‘ was also the first time to see Kashyyyk; the tropical, forested home world of the Wookiees. Master Yoda travels there to aid the Wookiees in their battle against the Droid Army to prevent a Separatist takeover. A Second Unit took landscape shots of Phuket in Thailand and Guilin in southern China as a basis for its otherworldly settings. The distinctive islands of Phang Nga Bay in the former were also seen in the James Bond film ‘The Man With The Golden Gun‘ (1974). As I said, photography was banned so I have included a shot of Kashyyyk concept art images (below) from the ‘Revenge Of The Sith‘ movie programme. 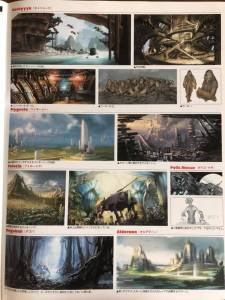 As a movie locations fan I really liked and enjoyed reading the ‘Making of…’ or ‘Behind The Scenes’ books for the first two prequels but the one for ‘Revenge Of The Sith‘ was a bit of a disappointment as pretty much the whole movie was shot on blue-screen at the Fox Studios in Sydney (Australia) using plenty of Second Unit background plates such as Mount Etna in Sicily which helped portray the lava flow of Mustafar, where Anakin Skywalker (Hayden Christensen) sustains his life-changing injuries.

Was some of this concept art on show at this exhibit?! Hmmm, maybe! I don’t remember!

When Obi-Wan lands on Utapau in search of General Grievous it’s mostly 1/90-scale rock blocks but there were some digi-matte establishing shots of the remote and rocky planet in the Outer Rim Territories’ that’s covered with enormous sinkholes. Some of those were on display in this Meguro Museum along with posters and countless other storyboards, models, production sketches and ILM-generated art (of costumes, weapons, landscapes, spacecrafts and so on) chronicling the journey from first draft to the big screen. 15 years is a long time and my memory is a bit hazy so please forgive any discrepancies!

The Japanese poster art for Episode 3

‘Revenge Of The Sith‘ rates quite highly in my list of favourite Star Wars films, and the awesome climax of the ‘Star Wars: The Clone Wars‘ TV series (which ties in parallel to the events of Episode 3) has helped propel it up the rankings. Some of the most memorable scenes are those on Mustafar where Anakin and Obi-Wan fight on platforms floating over the lava river. I just remember seeing many red, orange and yellow images on the walls as part of this exhibit.

The end of ‘Episode III‘ was always going to be the most intriguing part of the film as it had to blend into the start of what we all know from ‘Episode IV‘ regarding the Alderaan Starcruiser hallway. ‘Rogue One‘ (2016) would come along just over a decade later to almost seamlessly transition into the initial moments of the original 1977 film.

Alderaan is blown up in ‘Episode IV‘ but there was an establishing shot of the approaching cruiser which was a combination of digi-matte painting and some plate shots of the Bernese Alps around Grindelwald in Switzerland. There’s another 007 reference here as it’s snowy peaks were seen in far more detail in ‘On Her Majesty’s Secret Service‘ (1969).

For the record, the other exhibition at Tokyo International Forum (which later hosted ‘Star Wars: In Concert Live‘ in 2012) included the two yellow and red Jedi starfighter spaceships (used in the movie’s first scene) belonging to Anakin Skywalker and Obi-Wan Kenobi respectively. 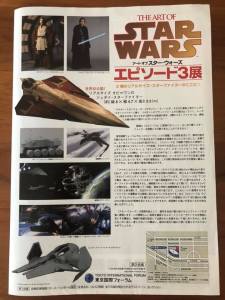 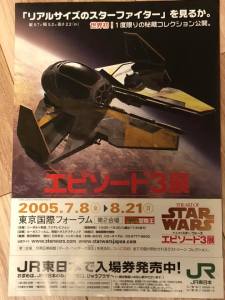 Whilst talking to my friend Dave at last December’s Nippon TV Star Wars exhibition I realised that I never even went to see ‘Revenge Of The Sith‘ (2005) in the cinema. How can that have been? Well, as is often the case, films are often released in Japan long after the western world and this one came out nearly two months later. This was an era before streaming but a friend had a copy of it which he burned on to disc for me. I watched that a few times so by the time it hit the big screen I barely even noticed it’s release. Different times!

Bonus: Unlike Episode I and II I don’t actually have that much merchandise relating to Episode III. Of course there are a few things such as this Pepsi Twist Obi Wan Kenobi can (Obi Wan Can-obi??). The Vader and Grievous ones were taken at the Star Wars shop in Koenji.

These Kelloggs Choco Flakes featuring Yoda…as well as Tony the tiger (of course!) on the box were from ‘Revenge Of The Sith‘ and have never been opened although my wife nearly did once not realising it was a vintage cereal box! 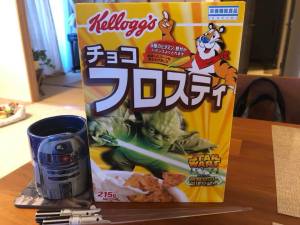