This Star Wars Celebration Japan event marking 30 years since the original film was released in Japan (it came out here one year later than in the western world) took place on the weekend of July 19-21 and of course myself and Gideon were in attendance on one of the days having bought our premium Vader one-day passes the week before at a  cost of 7,500 yen (approx. £37). 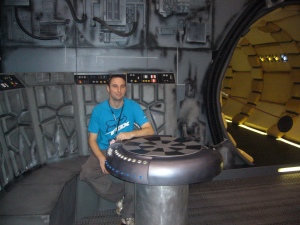 Arriving in plenty of time for the opening at 10am, we were straight on over to the Millennium Falcon, Jabba’s Palace and the speeder-bike (from ‘Star Wars Episode VI: Return On The Jedi‘) for photo stops and it was then that I realised how geared up this event was for the snap-happy Japanese with photo opportunities galore and often an assistant on hand to take the picture for you. 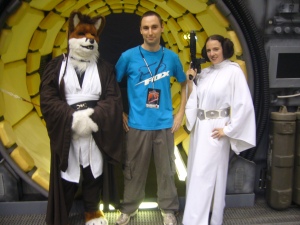 We were then frustrated that we couldn’t get in to the theatre area to see ’30 Year Heroes’ which was an hour long interview with the actors behind Darth Vader and Chewbacca and not full to capacity but I guess they didn’t want people constantly going in and out of the presentation.

Needless to say we didn’t make the same mistake later that morning with the ‘Star Wars: The Clone Wars‘ presentation which this event handily coincided with. A good promotion opportunity and there was a sneak preview of the film as well as an interview with the director Dave Filoni. When asked what his favourite character was, he just had to say that it was one from the new movie (called Ahsoka Tano) that none of us know of yet didn’t he!! 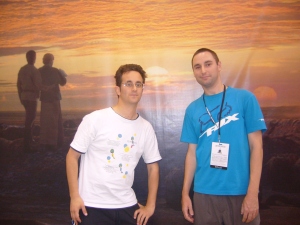 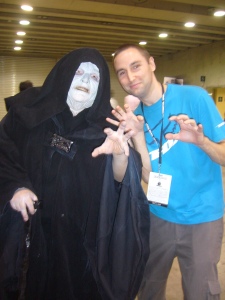 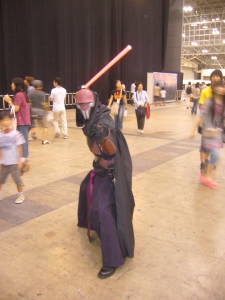 Hosted by Official Pix, there were some big stars on show to sign things for fans. The biggest (and most expensive!) star was Mark Hamill whose autograph cost a staggering 20,000 yen (approx. £100) and photos were not allowed. Other stars included Carrie Fisher, Anthony Daniels, Jeremy Bulloch, Peter Mayhew, Ray Park, David Prowse, Daniel Logan, Amy Allen and Tim Rose to name just a few. I dread to think how much each person spent on average! I spent a good £65 and that was just on the ticket, a souvenir towel and an autograph. 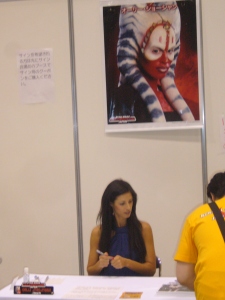 In order to justify to myself that it was worth the entrance fee, myself and Gideon thought we should spend more money so we went and got the autograph of Jake Lloyd who played the young Anakin Skywalker in ‘Star Wars Episode I: The Phantom Menace‘ (1999) as well as the young kid in ‘Jingle All The Way‘ (1996). I liked one of the images he was signing and thought it would look good on my wall with a signed message to me on it. We could also get our photo taken with him and chat to him for a bit so I’m happy that I overcame my cynicism to do all that.

Other exhibits included ‘The Vader Project’ featuring “edgy variations on the iconic Darth Vader helmet” which was an interesting and novel idea. There was also a Jedi training stage for aspiring young Jedi’s to learn the ways of the force and take on the challenge of Vader in a series of choreographed moves. A shame I wasn’t 20 years younger!! 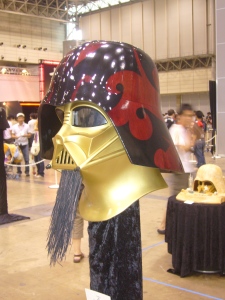 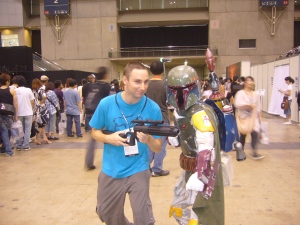 This place really was a godsend for those wanting to part with their cash! There were many collectibles on sale exclusive to Celebration and our passes did entitle us to skip the lines to buy such things but it was something we didn’t really take advantage of. 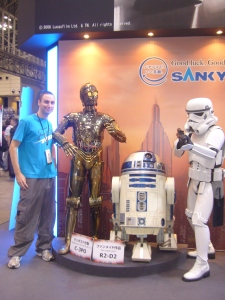 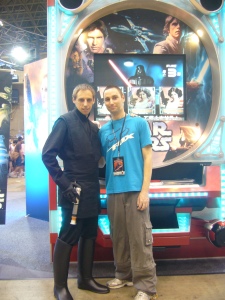 “Skywalking with Mark Hamill” brought the curtain down on the days events in what was a rare convention appearance by the man who portrayed Luke Skywalker. Although it got better towards the end with some interesting insights it was frustrating before that as he seemed to look a bit peeved and kept on talking about some film he’s making next year but I guess it was in his contract that he could promote it a fair bit.

The constant translating between the interviewer, Hamill and the translator herself was annoying for me as it really disrupted the flow but of course it’s a necessity in a country where English isn’t understood by the majority. One lady fan actually braved asking a question to Hamill in broken English which he didn’t understand so well as I guess he’s not so used to hearing the Japanese speaking English. All credit to her anyway and that was it for a very geeky, but enjoyable day hanging out with the stars, many other fans and cos-players. 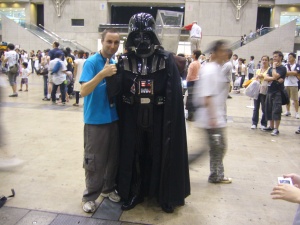