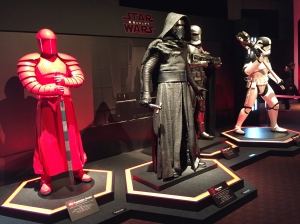 The last few years have been exciting times for Star Wars fans at Christmas with the release of three movies during the festive season. Of course I was there to see it on opening day at my local cinema and again at the same time seven days later but with my wife also in tow. Later that same day we went to Shimbashi to see this free Star Wars event at Nippon TV Tower which ran for a week between 22-29 December. 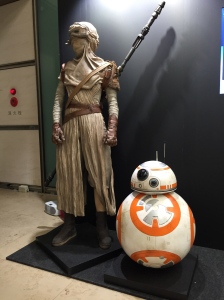 This event has supposedly taken place for the last three years but like many I was completely unaware of it due to the usual poor promotion of it. Still, the upside of that was of course far less people in attendance meaning we only had a short wait to get inside. My expectations were fairly low but that was maybe down to my poor knowledge beforehand of what exactly would be on display. As it was, there were many photo opportunities and straight off I had the chance to become part of ‘The Last Jedi’ poster (below) by holding a lightsaber in the correct place!

Just a little bit further was a one-third scale model of Kylo Ren’s Tie Silencer (below) which has never been on display in Japan before this event. I really should have stood under it to really show the scale of it! 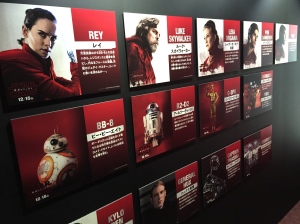 There were photos and profiles of all the major characters although Captain Peavey was absent. I mention him (he was General Hux’s assistant) as I was quite surprised to learn after my first viewing of the movie that he was played by legendary British comic actor Ade Edmondson. When I watched it again I was amazed by how much he was actually in it but a little disappointed that he didn’t turn of Hux and hit him with a frying pan or slam his head in the fridge door!!

Life-sized figures/statues are always popular with visitors and the four of them on show (below) were Kylo Ren, Captain Phasma, a Pretorian Guard and a First Order Stormtrooper executioner. 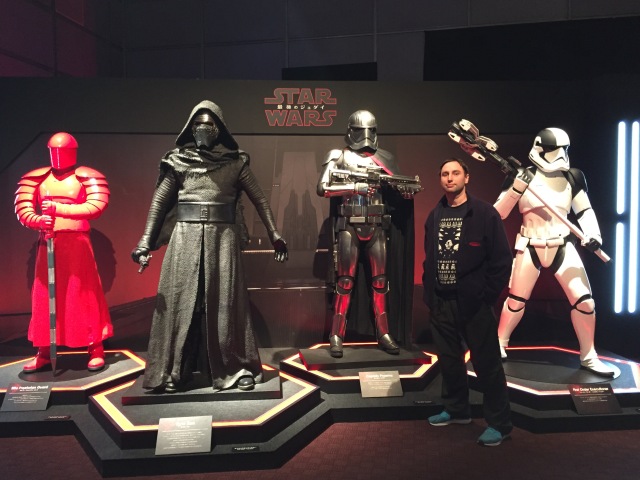 There was some excellent artwork on show from a range of participating artists including a few illustrators, painters and artists and no I don’t really know what the difference is between those trades! 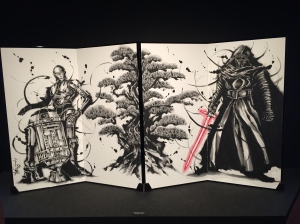 Back in October there was a Star Wars The Last Jedi Art Show Tokyo exhibition in Harajuku and some of the stuff (below) from that reappeared at this one. 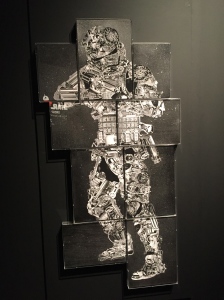 Japanese love stamps (ink ones rather than what you might put on a postcard!) and there were a wide variety of Last Jedi-related ones attached to a big table for people to print on to special Star Wars A4 paper sheets. I was keen to start with but lost interest as soon as one of the stamps didn’t quite print correctly! Other stuff on show included life-size lego replicas of Kylo Ren, Rey and BB-8, a shogi set, a Skywalker katana (Japanese sword) and so on. 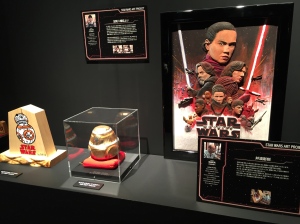 There were a couple of hands-on exhibits including ‘Star Wars Droid – Repair Bay’ and ‘Star Wars – Jedi Challenges’ which I may have tried if there was no line but of course there was and I wasn’t prepared to wait! 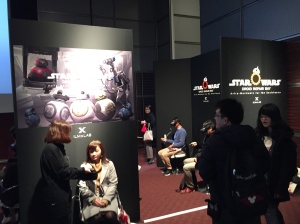 As is almost expected with any event in Japan, there was a souvenir shop (below) at the end with all manner of Star Wars gifts available for purchase. My wife was mightily relieved that I left empty handed! 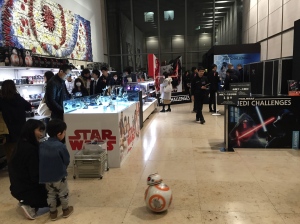 Once we’d finished there we walked the short distance to Caretta Shiodome to briefly see the illuminations which were part of my ‘Christmas 2017 In Tokyo‘ post. 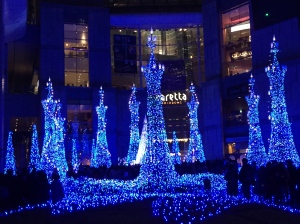 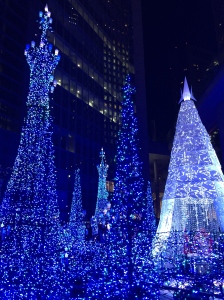