#ForceFridayII– The Journey Towards ‘The Last Jedi’ Has Begun

The journey towards ‘The Force Awakens‘ (2015) began around this time two years ago with #ForceFriday and now we have #ForceFridayII to mark the release of its sequel ‘The Last Jedi‘ (2017). As hotly anticipated as this one is, it’s surely not going to be able to replicate the staggering commercial success of a film that fans had to wait over 30 years for!

There wasn’t that much Star Wars activity in Tokyo on #ForceFriday in 2015 (compared to other principle markets like the USA, the UK, Australia, Canada, France, Germany and Spain) and even less for #RogueFriday last September but this time there were a few events taking place.

Loft in Shibuya, Tsutaya T-Site in Daikanyama and Toys ‘R’ Us in Ikebukuro all had midnight events this time and Tokyo Fox was on hand at the latter to bring news of all the new Star Wars merchandise on sale. Like last time, my friend Ben was by my side for an event that has been heavily hyped in the Star Wars community. 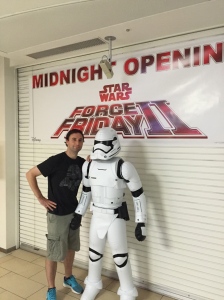 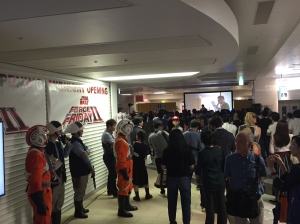 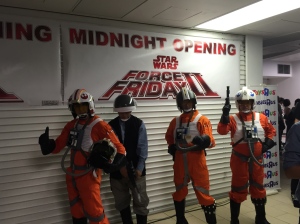 Thankfully the predicted rain held off and I was able to cycle down to Ikebukuro just after 11pm to join around 200-300 other Star Wars fans eagerly anticipating the midnight opening of the store selling some new merchandise. There was a countdown party with a DJ on stage geeing up the crowd over the top of some classic Star Wars soundtrack music. Also present were a few stormtroopers and rebel scout troopers who were on hand for cosplay photos. Chewbacca and Darth Vader later joined the party! 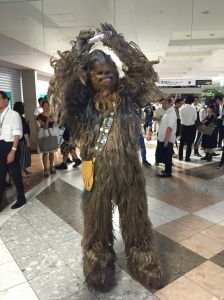 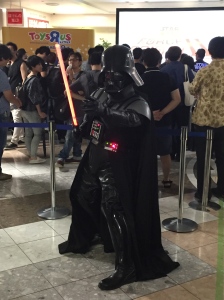 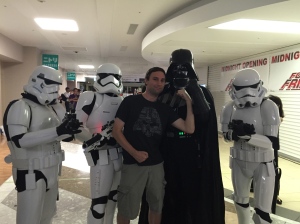 Good old Japanese efficiency meant there was some kind of queueing system not that we really knew it at the time. On entry to the event, customers were given a serial number ticket (as well as a bottle of water and some Star Wars cards) and that dictated when we would be allowed in so there was no mass rush and push to get in when the doors opened! I don’t think we actually entered the store until 30-40 minutes after midnight! 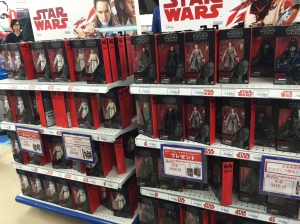 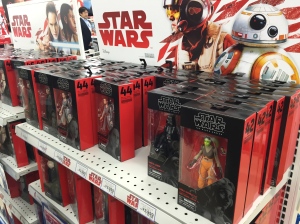 The Porg and Praetorian Guard characters were the main bobble head figures to be launched alongside a variety of different troopers and there also seems to be a new range of BB droids. I thought my ears were deceiving me when I heard the name BB-9! However, there is a BB-9E as well as BB4 and 2BB-2! Yes, really!

We were all handed a basket on the way in which was useful for many although they really do get in the way. The main point of interest for me is always the 3.75 inch figures which make up the majority of my own collection. New characters like Rose and Paige were alongside returning episode VII characters like Poe Dameron, Kylo Ren, Finn and Rey as well as  legends like Luke Skywalker and C3p0. Actually, I was quite disappointed with the choice available and hoped to see much more variety but that may have just been this store.

Admittedly, seeing the new stuff wasn’t anywhere near on a par of two years ago but it was never going to be in all fairness. We bought a Praetorian Guard bobble-head each as Ben needed to spend 2000 yen to get cheaper parking in the Sunshine building. We finally called it a night at around 1:15am which is about as wild a night as I get these days! 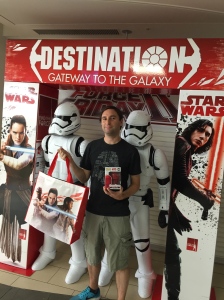 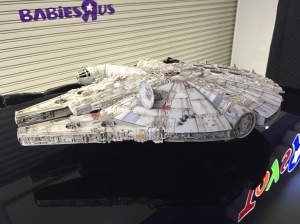 Today was just the start of the journey taking us up to December 15th and no doubt the marketing and promotion will step up over the coming months with all kinds of food and beverage tie-ins. With season three of ‘Star Wars Rebels‘ having just been released on DVD and blu-ray, it’s fourth (and final) season  starting next month, the spin off Han Solo movie in May 2018, ‘The Last Jedi‘ this Christmas and the ‘Star Wars: Galaxy’s Edge‘ themed area at Disneyland in 2019, there really is no sign of the franchise taking any kind of break. Hopefully the market doesn’t become too over-saturated!!