Going Beyond Tokyo Skytree In The Sumida Area

Thousands of visitors descend on this part of Tokyo every week to visit SkyTree; the world’s tallest tower. However, beneath the shadow of the 634 metre tower lie a few relatively unknown and quirky places worthy of a few minutes time.

Tobacco & Salt may sound like a joke of an idea for a museum but it’s very much for real and the fact is that this quirky place actually has a history going all the way back to 1978. In the very early days of the Tokyo Fox blog, I visited it at its original location in Shibuya as I was curious to see how such dull subject matter could be exhibited! A few years ago the museum relocated to Sumida ward and, as I was passing by it last week, I finally (after much hesitation!) decided to go in and take a quick peak as my curiosity once again got the better of me! 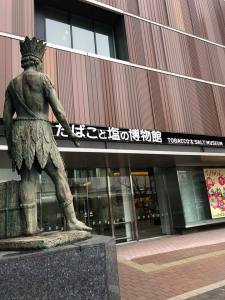 The building that houses this museum is an impressive one and incredibly there are five spacious floors for visitors to check out. The 100 yen entrance fee is neither here nor there really! What I didn’t realise until entering the salt exhibition room on the second floor is that I have a much richer salt history than I ever realised as I have actually been to a few of the salt locations referenced. The initial exhibits are about The Dead Sea in Jordan (and Israel too!) and Death Valley in California as well as some famous South American ones including Atacama Salt Lake (Chile), which featured in ‘Quantum Of Solace‘ (2008), and Salar de Uyuni (Bolivia) which more recently provided the backdrop for the mineral planet of Crait in ‘The Last Jedi‘ (2017).

If that wasn’t enough, then there was another place which I had completely forgotten about visiting. In early 2010 I went to the Wieliczka Salt Mine in Krakow (Poland) and in this museum there were a few artefacts from there including a rock salt statue carving and a block of Polish rock salt. Anyway, I won’t bore you too much with what was on display but it was surprisingly more interesting than one would ever expect! 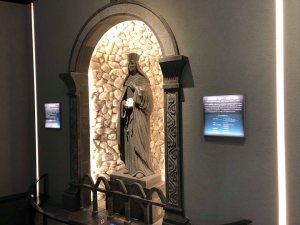 The third floor is about tobacco and even less interesting for someone like myself who has never smoked a single cigarette. Still, there were a few bits and pieces which caught my attention briefly including the traditional ukiyo-e woodblock prints, Japanese cigarette posters and the retro products from around the world. 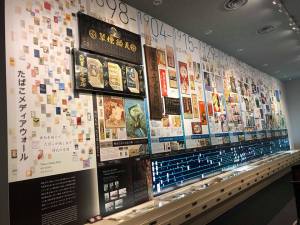 Just five minutes walk away from there is Morihati confectionary store (below) which is housed within an interesting looking castle-like building. It sells Japanese sweets like daifuku, dango, dorayaki, kuzumochi, monaka, manjū, sakuramochi, senbei and a load of other things which I don’t have a clue about! Basically these traditional sweets are very different to their British and American counterparts as ingredients such as red bean paste and mochi are used. When offered them I certainly eat them and they’re mostly all ok but given a choice I’d always go for the western variations! 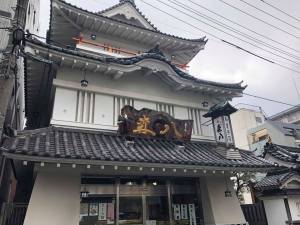 Of course I couldn’t completely ignore Tokyo Skytree as it was always there looking down on me. Just like I’ve never been up Tokyo Tower, I’ve never been bothered about ascending Skytree or even seeing it from it’s base despite having been in close vicinity on numerous occasions with this time being the closest I’ve got. I was outside Tokyo Skytree station and on the floor are two feet prints declaring it as a photo point so I thought it would be rude not to do as suggested! You can see the result below! 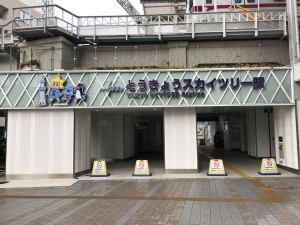 Before all of that I had lunch at a ramen restaurant which serves up a truly original variation of the classic noodles in broth soup dish. Kipposhi specialises in blue ramen and just a few doors down from there is the tiniest of shrines (3-1-7 Azumabashi, Sumida-ku). Such minuscule places of worship (below) have captured my interest recently whereas in the past I would’ve just walked past without even noticing them! 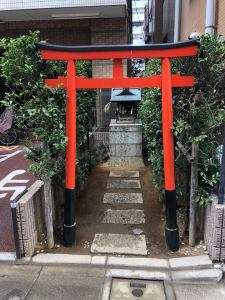 My final port of call was Kinshicho where I came across a couple of vaguely interesting buildings which you can see below! 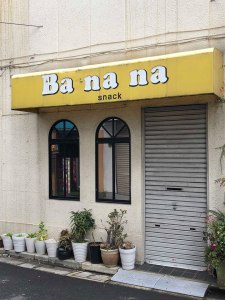 Click here to read about my original visit to the Tobacco & Salt Museum in 2006!!