What Can You Expect To See At Japan`s Sushi Museum?

Whenever I come across new and interesting places on the internet or in person I enter them into `Want to go` on Google Maps. Over time I often forget all about them and then when I`m in that area it`s nice to see the green flag icons. Sometimes though I can`t for the life of me remember why a place was recommended or entered, and this was one such example! As much as I love eating sushi, I can`t say I`ve ever been too interested in a museum on it so I can only guess it was highly recommended.

Shimizu Sushi Museum can be found on the second floor of S-Pulse Dream Plaza and was my first stop of the day. It`s located at the back of a souvenir shop and costs 500 yen to enter. I can`t say I was desperately keen to go in but as I`d come that far I thought it was a now-or-never moment. Later research has revealed there is supposed to be a Mount Fuji made from sushi at the entrance but I somehow managed to completely miss that!

This museum, which opened in 1999, was much bigger than I was expecting, as beforehand I was really wondering what kind of stuff could be included. Ignorant people like me might see it as a limited subject but, having been to the salt museum in Tokyo, I really should have known better! There`s always far more to something than meets the eye! 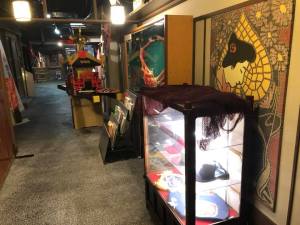 The content was admittedly nothing like I expected and the history of sushi seemed to take precedence with a few Shitamachi-dori (downtown neighbourhoods) reproductions from the Edo Period (1603 – 1867). It was all quite interesting but I did find it quite difficult to connect it all to sushi.

I had the whole museum to myself and did quite enjoy exploring the streets that represented towns-people culture dating back a few centuries; a time when there were many craftsman stores of daily commodities such as clocks, smoking pipes, candy and china. Different times indeed!

Maguro shrine (Tuna Shrine) is on location to worship the seafood brought into the harbour area behind the shopping mall within which this museum is located.

Shukuba is a posting station for travellers alongside a main road which was structured in the Edo Period. On the Sukuba-dori reconstruction you can see stores selling items needed for travelling such as geta (Japanese wooden clogs), umbrellas and uchimono (weaponry such as swords and spears). It is no surprise that I have I have rarely travelled with any of those items!! 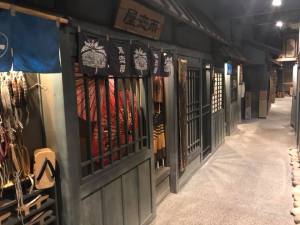 The sushi-yatai stalls are still just not something I can imagine eating such food from as I have of course only ever known conveyor-belt sushi style or just a normal restaurant. Presumably, given Japan`s tendency to not eat outside, the purchasers of the sushi took it home to eat. Correct me if I`m wrong!! 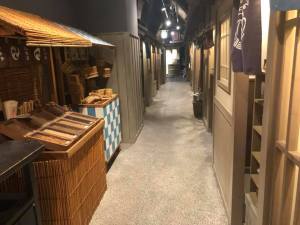 After that the museum was probably more of what I expected with a sushi map of each prefecture, sushi-related literature and panel introductions to Shimizu Port which is said to be the best landing place of tuna in Japan.

Finally there was something more directly relating to sushi which I could appreciate by way of plastic samples of all the different kinds of sushi. This was more like it but was probably something I could`ve lived without!

“The history of vinegar is very long” was the opening paragraph on one exhibit. I assume the usual bad English meant to say that it dates back to a long, long time ago but the  unfortunate error in word order was enough for me to give up and make my exit via steps going down to the ground floor.

I guess this museum is designed to get you in the mood for a meal at one of the eight  restaurants on the ground floor specialising in fresh seafood which the area is famed for. I`m probably not cultured enough to truly appreciate such a museum but I`m sure others can get far more out of it than I did.

Bonus: The only other point of real interest for me inside the shopping mall was the Shimizu soccer shop.

There is a big ferris wheel outside but the common views of the city and Mount Fuji from the top of it would definitely not have been visible on this dreary day.

Once I was done at the shopping mall, I crossed the road to check out the S-Pulse Dream House which is basically an official club shop. After that I then walked four kilometres south to IAI Stadium Nihondaira to see the the J-League match between Shimizu S-Pulse and Kashiwa Reysol. 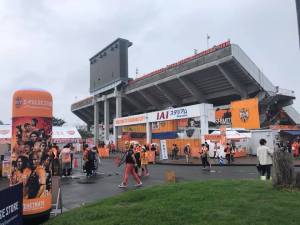 Click here to read `Sitting Amongst The S-Pulse Faithful In Shimizu But Quietly Supporting The Opposition!`

Click here to read `Dining Out In Shizuoka City`

2 Responses to What Can You Expect To See At Japan`s Sushi Museum?