Fun & Excitement Are Never Too Far Away When Watching This Non-League Japanese Team!

The Japanese all seem to love Disney and pretty much every passenger who disembarks at the Maihama Station is heading to “the happiest place on earth.” Not me though!

So much fun to be had at the places in this picture but where would my blue dot be if I hadn’t switched off my location? pic.twitter.com/PH2e0ZK3CQ

In response to the above tweet most people naturally assumed I was at Disneyland or DisneySea but if you look down to the bottom right corner of the photo below then you’ll see the blue dot was actually just outside the boundary of that magical area. It’s not the first time this has happened as earlier this year my blue dot was just over the wall from Universal Studios Japan in Osaka. It always feels a little bit strange to just be only metres away from such fun places!

There are palm trees aplenty in this area of Chiba Prefecture, and with all the themed rides and people radiating happiness it was like I’d been transported to another world. In a way I had as I was there to see some Kanto Soccer League (KSL) action which is kind of fifth tier football (other regional leagues could make the same claim I guess!) and something I’d only dabbled in once before.

A couple of years ago I went to one in Yokohama and it was an enjoyable enough experience. Basically, if there is some kind of stand to view (not always the way in the KSL) then I feel it is worth seeing, and I can’t deny that its close proximity to the magical kingdom wasn’t the main reason for my presence.

Urayasu City Athletic Park was the latest port of call as my ground-hopping around Japan continues. Day trips are pretty much out of the question now for J-League matches as I’ve been to all of them. New grounds in 2019 have included FC Gifu (J2), Yamagata Montedio (J2) and Vegalta Sendai (J1) but they all needed overnight stays. Go down the leagues far enough though and there are some possibilities for games which is why I found myself in this corner of Chiba. 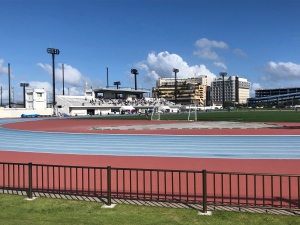 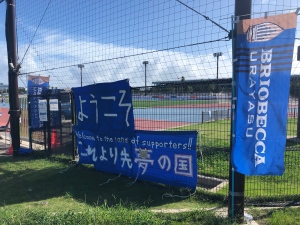 Briobeca Urayasu were founded 30 years ago as Urayasu Junior Soccer Club with the aim of being a team loved by the local community who could watch their growth. I’m not too sure of their progress over the decades but I have to say that I was quite impressed with what I saw at this great little football club. 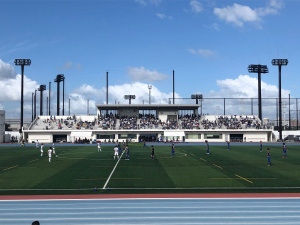 Entrance was ¥1000 for the main stand and ¥500 for the one opposite it. I took the latter not just because it was cheaper but because I wanted to have the better view. As I entered I was given a Briobeca fan to keep me cool (it was a very hot day back in early September!) and a match-day programme which put many league clubs to shame. Inside it I discovered that it wasn’t quite the team of University students I’d expected. The youngest player wasn’t even old enough to go to University. He was born in 2003! By contrast the oldest player was 34 years old.

The match was played on astroturf which was a new experience for me as I’m sure when I went to an away match at Luton Town in the early 90’s their plastic pitch had been replaced with grass. As for playing on one myself, that’s another story as one of my schools had an all-weather pitch so I played on it many times so know how it differs from a normal grass pitch.

The away team took the lead. The equaliser came. Hitachi regained the lead. There was an unbelievable save from a spectacular shot on the half-volley from just outside the penalty area in the second half. It may have been a volley but my memory has long faded regarding details of this particular game. That matters not really as even at the best of times I rarely write too many details regarding match action. Surely it’s as much as anyone really needs to know anyway! 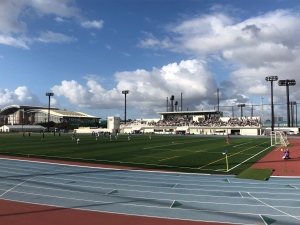 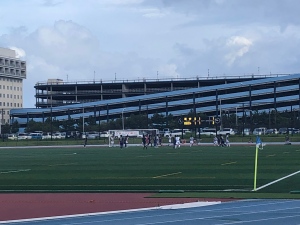 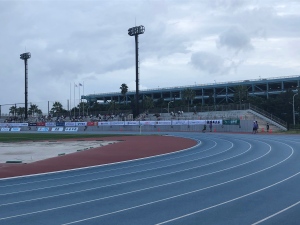 It was quite a bizarre place to watch football and I could feel the pull of the Star Wars Star Tours ride just down the road! It’s so close but whilst watching Briobeca it really does seem like a galaxy far, far away! The force was with Hitachi Building Systems on this day and there was no fairytale ending! Maihama is the gateway to one of Japan’s most popular attractions, and with such illustrious neighbours you are quite literally never too far away from fun and excitement when watching Briobeca Urayasu!!

The first thing I actually did on arriving at Maihama Station was to head in the opposite direction to where everyone else was going. Disneyland and DisneySea are south of the station but about 15 minutes on foot northwards is the Henna Hotel. This hotel first opened in Nagasaki and featured on ‘Joanna Lumley’s Japan‘ and the BBC technology show ‘Click‘ a few years ago.

Since then Henna Hotel has also been opened in Maihama and I thought I’d go along to see the reception area. Yes, that’s pretty sad I know but I had time and was curious to see it with my own eyes. Sadly the animatronic dinosaurs on reception were powered down and wouldn’t be in operation till nearly an hour later when check-in commenced at 3pm. There were a couple of other dinosaurs as a display too.

Bonus: Just one week later and I was off to another new stadium. Before they moved into Saitama Stadium 2002, Urawa Reds used to play at a 21,500 seat stadium but as they grew and grew in popularity something much bigger was needed. They moved from Urawa Komaba Stadium (still considered by many to be their spiritual home) to their present home in October 2001. Although the men’s team do still play the occasional low-key match at Komaba, it is principally used by Urawa Reds Ladies and it was them that I was in town to see.

Having lost my live women’s football virginity seven weeks earlier, I was back for another game but this time it was for a Nadeshiko League 1 match.

Urawa Komaba Stadium is about a 20-25 minute walk from Urawa Station and a sizeable crowd was in attendance. It all took me a little by surprise as I didn’t know anything about this stadium beforehand so was expecting a much smaller ground.

It was 1-0 to the home side at the break and then the pivotal moment came just one minute into the second half. Sendai hit the bar and within about twenty seconds the ball was down the other end and in the back of the net thanks to a great lob. End to end stuff and proof of how quickly things can change in football! Urawa led 2-0 as they did indeed at my previous women’s match. On that occasion they still lost but that was never really in danger of happening here. 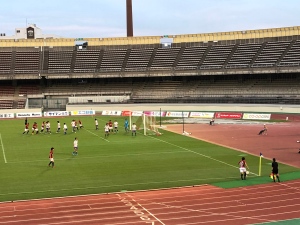 Thanks to a response to my above tweet I found out that a guy called Gary (who I met at the Blind Football World Grand Prix last year) was there so I mailed him and with ten minutes to go we met up for a quick chat before heading off together not so long after that.

Click here to read ‘The Natural Island In Eastern Tokyo You Probably Didn’t Know About!’

Click here to read ‘Time To Jump On The Women’s Football Bandwagon For A New Experience!’

7 Responses to Fun & Excitement Are Never Too Far Away When Watching This Non-League Japanese Team!