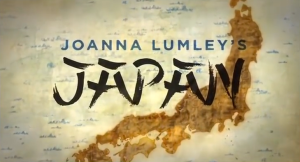 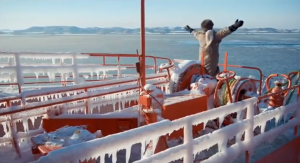 The celebrity travelogue is a well-worn but fairly trusted way of delivering ratings for TV stations and when this three part series aired on ITV last month I expected more of the usual formula of looking at everything weird and whacky that Japan has to offer. Instead Lumley delivered a wonderfully glowing and positive account of her journey across Japan in such a warm and infectious style.

Rather than the usual Tokyo and/or Kyoto reportage, the ‘Absolutely Fabulous‘ star travelled the length of Japan covering all of the four main islands as well as Okinawa. Little did I know at the time that she had already made a few other similar travel documentaries for ITV about the Nile and a Greek Odyssey.

Episode 1 – Starting off in the north of Hokkaido Lumley drives through scenery which at times looks like something out of fictional Narnia. She goes to see cranes in the wild in what is the last habitat of a bird which has held mythical status in Japan for thousands of years. The views are astounding and look more like a Japanese painting than actual reality! 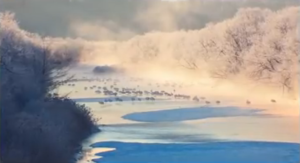 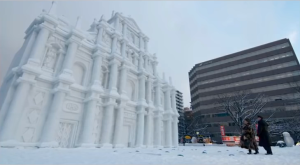 Her time in Hokkaido’s capital coincides with the Sapporo Ice Festival and later it’s the other extreme as she attends a fire festival. The exhibits at the former really are works of wonder and it is still hard to believe that they are just smashed to pieces at the end of the festival.

Lumley inevitably talks about Japan doing things their own way as for 200 years it was isolated and subsequently formed its own unique culture. More common ground is covered such as vending machines selling both hot and cold drinks to observations about mascot merchandise which incredibly generates over £10bn each year. They really are everywhere and Japanese society can seemingly not live without them!

As the title says, this is Lumley’s Japan and as a vegetarian and animal rights activist the series didn’t include too much about food or drink beyond the sake tasting in this episode and when that happens we see a bit of the Patsy in her!

There is more Narnia-like scenery to come as she makes her way to the fairytale-like five storey pagoda which is 700 years old and made entirely of wood with no nuts or bolts used. If I hadn’t been to Kintai-kyo bridge in Iwakuni a few years ago I’d never have believed that something could be constructed in such a way. Lumley says she could happily live in this type of place forever! 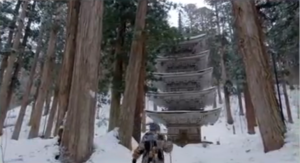 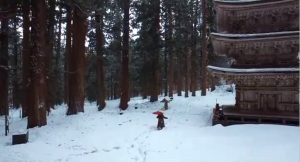 The most fascinating part of this episode for me was her visit to the 12 mile exclusion zone around the Fukushima Nuclear Power plant which was badly affected five years ago by the catastrophic earthquake and tsunami attacks. The film crew were under strict instructions to stay in this ghost town zone for no more than five hours and it was really interesting to see that some of the shops and restaurants were exactly as they were left in 2011. We also hear the marvellous story of the one resident who refused to leave and exposed himself to high levels of radiation in the name of saving the many pets (and cows too) that were left behind in the evacuation. 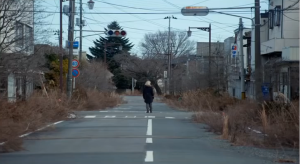 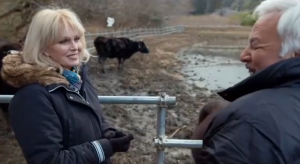 She then stays at a ryokan (Japanese style inn) in Nagano where she goes to see the monkey onsen as well as have her own hot spring bath before ending her two week stay in  Japan’s island of nature and wildlife with a ride on the Shinkansen (bullet train) to Tokyo  and a vast difference in the pace of life.

Episode 2 – The least interesting episode for me as it’s the part of Japan I’m the most familiar with but that’s not to say it wasn’t without some delights. From the classic shots of going through Shinjuku in a taxi to a helicopter flight over Tokyo, Lumley gets to see the more famous parts of this country. 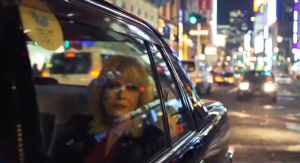 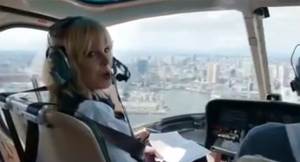 That extends to things many of us have seen before like the locals wearing masks to hide their emotions (they’re not just worn to protect from colds) or Kappabashi Street which is where all the plastic food you see sitting inside restaurant windows (or outside) is made.

Of particular interest to me was her kindergarten children lunchtime experience where she witnessed the kids singing a song before eating with an immense amount of courtesy. Japanese people tend to think its best to be the same as others but this particular school recognises and embraces individuality rather than having to conform like in many other schools. She joins a teacher for an English class which was all a bit cringeworthy for a fellow teacher like myself.

“If the nail sticks out too far it can’t be hammered down” is the response by one unique individual to the usual view of Japan being a homogenous society. She was a model trying to break the mould in the wastelands of a Tokyo suburb and the presenter was a big fan of her style.

Nearly a third of all J-males are single and it would have been very easy for Lumley to criticise the men who attend performances by young Japanese-girl singing/dancing groups (aged between 18-26) but she still keeps up with the positive spin agenda of this series.

Mount Fuji naturally features by way of how the beautiful woodblock prints of the sacred mountain are made. This was interesting and Lumley was inevitably fascinated by the process as she has one featuring mountain back at home in England. As for the real thing, she sees Fuji-San as I’ve often seen it which is very faintly amongst the dark clouds!

I remember one of my students mentioned the Nakasendō in the past but I never really understood what she was on about. This is a route used long ago to connect Edo (modern-day Tokyo) and Kyoto and it stretches for over 500 kilometres incorporating seven prefctures. 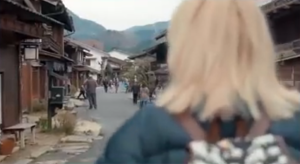 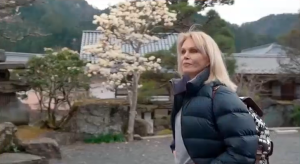 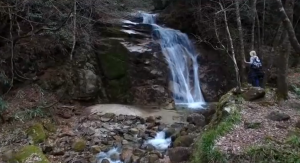 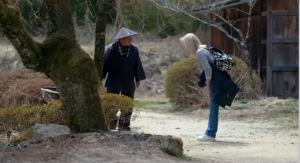 The part Lumley traversed was the forest area and restored row of houses along the former post road in Magome in Gifu prefecture. She was particularly fond of the local cup of tea she was served by a guy who sang her a song before she drank it. More singing in tea shops was her passing quip!

She ends the episode in Kyoto where she see’s the cherry blossoms and the camera frenzy which accompanies it each year. The sound of the camera phones going off constantly is now sadly very much a part of this most aesthetically pleasing of seasons. 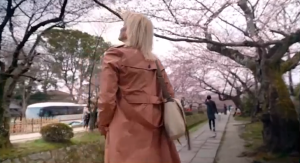 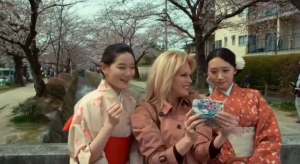 Tourism in Japan has multiplied big time in the last few years and now there are even foreigner friendly taxi’s in Kyoto which shows the effort the country is making in anticipation of more and more visitors in the next few years. Finally, it seems that someone has realised it’s real weakness when it comes to becoming a true global place is the language barrier and so these taxis (where the drivers have passed some kind of exam) are a bit of a godsend.

Of course there had to be something about geisha and so we see her spending a bit of time with a young geiko girl who explains all about her job and the hardships of such labour. 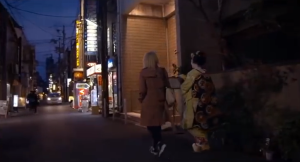 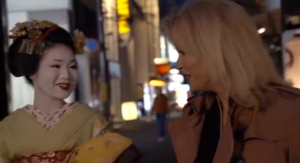 Epiosde 3 – Having driven over longest and highest suspension bridge in the world this episode begins with the 88 temple pilgrimage in Shikoku which is dedicated to Kōbō-Daishi who brought the true word school of buddhism to Japan in the 19th century. 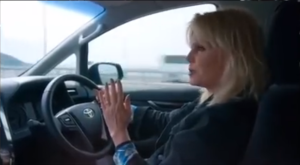 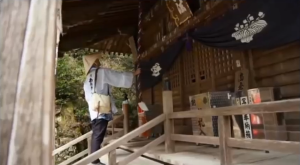 “I’d never forget my stick” claims Lumley after seeing that previous visitors to temples had got so caught up in the rituals that they ended up leaving them behind. Famous last words!!

From Shikoku it’s on to Kyushu, the most southern of Japan’s main islands. There was to be no stop in Hiroshima as maybe the producers wanted to focus on just one of the two cities which were attacked by atomic bombs in 1945. In Nagasaki she visits a school which withstood the atomic bomb but sadly 1400 out of 1500 students were wiped out. Today it still operates as a school although part of the building is now a museum. There is a boy statue of peace on the school grounds which the students bow to at the start of each school day. 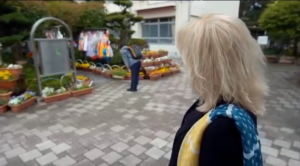 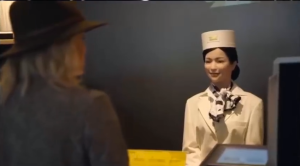 It’s impossible for all these TV shows on Japan to not have some kind of crossover and here she stays at the Henna Hotel in Nagasaki-prefecture which featured on the BBC technology show ‘Click‘ last year.

300km further south is Kagoshima where the active volcanic island of Sakurajima lies and its another school visit. In this one the kids sweep volcanic ash from the playground every day and have regular evacuation drills. 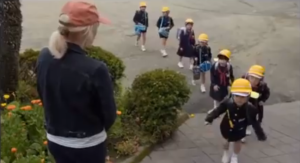 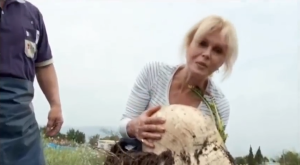 Despite the obvious downside to living in the area, there are some benefits such as the  fertile soil which helps to produce the most gigantic radishes and she was later blown away by a gorgeous radish lunch on the farm.

It took me by surprise that she continued to venture even further south but on to the  Ryukyu islands and Okinawa she went. Okinawa is the home of karate and as she partakes in some martial arts training it does bring out an interesting anecdote of sorts from her time in ‘The Avengers‘ TV series some 40 years ago!

Elsewhere she spoke to a survivor who went on to become governor of Okinawa and dedicated time to setting up a peace park to commemorate the battle where over 240,000 Japanese and American soldiers died. The former Japanese Navy underground headquarters where many Japanese chose to commit ritual suicide in the tunnels rather than surrender is a place she finds pretty unbearable. 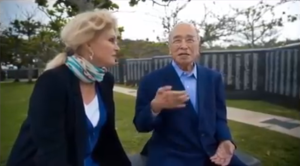 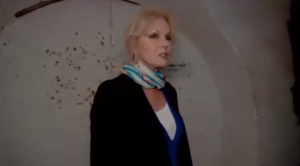 The series had to finish on something more positive and heart-warming. She meets up with an all female singing group but this is all a far cry from the teeny boppers who dominate the music scene for their average age is 84!

Overall, it was hard to criticise anything too much about this show and I was delighted that all three episodes introduced me to some unknown parts of the place I now call home. She expected an extraordinary trip and with her natural curiosity and engaging storytelling that is what she encountered.She was lovely to everyone throughout coming across as such a charming travel companion and concluded by saying that Japan felt like a home from home.