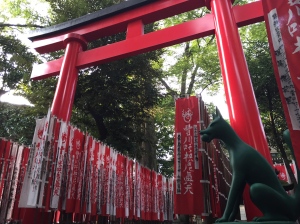 Making this ‘On The Fox Trail…’ stuff into a series was never really my intention but dipping in and out of ‘The Fox And The Jewel‘ (1999) by Karen A. Smyers has certainly increased my knowledge about this topic. As I had a few hours to kill between lessons in Shibuya recently, I got on my bicycle and headed the 4.2 kilometres distance to Toyakawa Inari (1-4-7 Moto-Azabu, Minato-ku) in Akasaka and it took just 15 minutes to reach  along route 246 with the place located not too far from the likes of Hotel New Otani and Hooters! 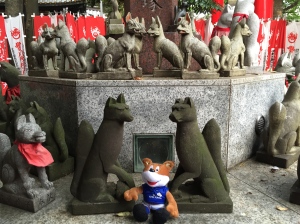 Toyokawa Inari is one of the major centres of Inari worship and, unlike Saijo-Inari in Okayama, this one was packed full of kitsune (foxes). One fox seems a bit out of place though!! 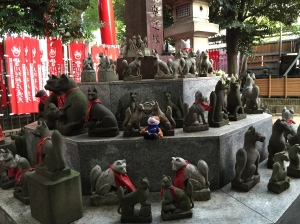 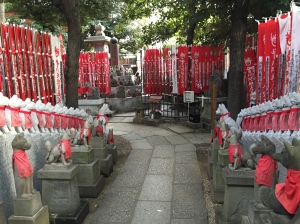 Although Inari is often associated with shrines, this Tokyo branch is actually a Buddhist temple with remnants of shrine influences such as the torii gates and of course those foxes! Having been a closed country for 200 years Japan opened its doors to the western world in the mid-19th century and the government said that temples and shrines sharing the same location had to be separated but it seems that Toyokawa Inari resisted such change.

The head temple is in Aichi prefecture and this branch in Tokyo was founded way back in 1828 although it was completely burned down in WWII so everything seen today is a post-war reconstruction. It is supposedly visited by many people in the music and entertainment industry on New Years Eve. 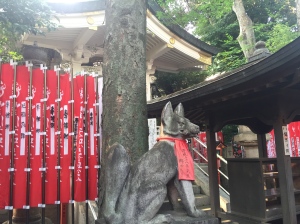 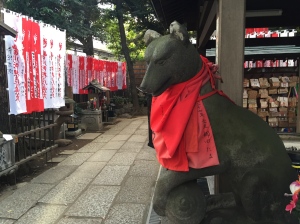 During the time I was in attendance, a steady and constant number of people trickled in to the temple to rub one of the fox statues as they believe it helps cure sickness. Despite that there was still a feeling of tranquility away from the crowds of urban Tokyo. Towards the rear of the temple is a small waterfall and a smaller shrine (or is it a temple?!) with the usual wood blocks (fox ones here) for worshippers to write their prayer requests on. 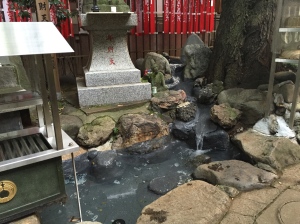 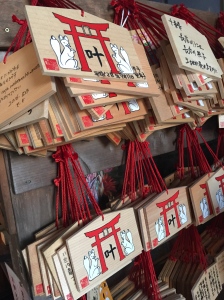 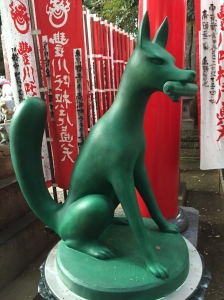 On the way back to Shibuya I stopped for a drink at Cafe Kitsune (3-17-1 Minami Aoyama, Minato-ku) which is located on a backstreet away from the main road, this place was far more popular than I thought it would be. 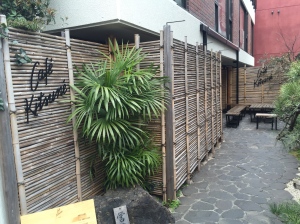 There was far more room inside than I thought and after ordering a hot green tea (440 yen) I took my place in the corner. There were plenty of souvenirs on sale displaying the brand name such as coffee, cups, bags and even fox-shaped biscuits! 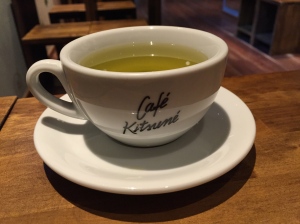 Just round the corner is Maison Kitsune (3-15-13 Minami Aoyama, Minato-Ku) which is a clothing shop that is all part of the same company.

There was to be one more brief photo stop as I rode towards Ebisu from Shibuya. Along the way I passed (as indeed I do every week) Dining & Bar Kitsune (2-20-13 Higashi, Shibuya-ku) which seems to be a fairly expensive place offering French-Japanese fusion sushi and a wide variety of quality sake. I’m not sure but I think all these Kitsune places are part of the same company ownership.

The fox-related action didn’t end there though (am I foxed in the head or what?!!) as back at home later that night my wife and I finally got round to watching ‘Zootopia‘ (2016) on DVD which my colleague George kindly lent us. I’m not usually one to enjoy Disney movies but this one was hugely enjoyable and more than just a kiddy film! 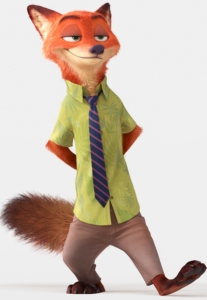 The previous time I watched an animation featuring a fox was ‘Fantastic Mr. Fox‘ (2009) which became a line beloved of a few commentators last season when Leicester City surprised the world and won the title. For the Premier League worldwide feed, Jon Champion used the line in the wake of Jamie Vardy’s wonder strike against Liverpool at home and then Steve Wilson gave Riyad Mahrez that moniker on ‘Match Of The Day‘ after he struck the winner away at Watford as the Foxes closed in on the title. The latter very kindly responded to my tweet about such a matter which I was delighted to receive as I’m very much a fan of his commentaries.