The “Rocky” Steps Of Tokyo (+ Some Hidden Gems Nearby!)

As cities go, Tokyo is a fairly flat city and therefore quite easy to navigate by bicycle as I often tend to do. However, there are some steep hills around Minato ward area including a shrine which stands at the top of some very steep steps that evoke memories (for me!) of when Rocky trained on such similar-style steps to the tune of ‘Gonna Fly Now‘ in the 1976 film. 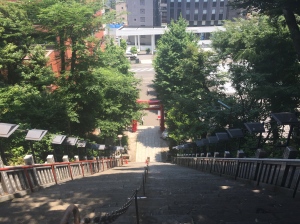 Atago-jinja Shrine (1-5-3 Atago, Minato-ku) is a whopping 26 metres above sea level and is actually the “highest land in Tokyo’s 23 wards” which is presumably phrased like that as there must be higher places out west or on the islands lying south of Tokyo. Of course 26 metres is nothing much, especially with all the high rise buildings around it now obscuring the views it had in the distant past.

Unaware of where this shrine was, I just used the maps app on my phone and so I actually arrived at the top which is just a stones throw from the NHK Museum of Broadcasting. For anyone wanting to go on foot, it is located just a short walk (around 5 minutes) away from Toranomon Station or Kamiyacho Station. I left my bicycle in the car park and headed straight to the steps where the view was something I had never experienced in Tokyo. 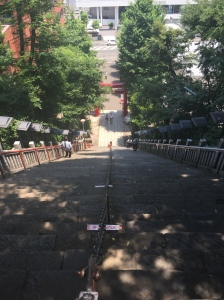 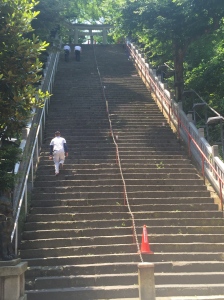 85 steps lay before me but descending them was the easy part……not that climbing back up them was particularly tough. As for running up and down them to imitate Rocky, well that really would test one’s fitness. In Philadelphia, tourists often mimic Rocky’s famous climb which is a metaphor for an underdog or an everyman rising to a challenge. These steps at Atago sure are steep. They not only lead to the shrine but more famously they also represent success in life. The main Shinto god worshiped in this shrine represents fire as the views from upon high in previous times were perfect for looking out for fires. Other gods worshipped relate to water, mountains and military.

This Shinto shrine was actually established in 1603 although the current shrine on the site only dates back to 1958. There is the story that a young samurai was challenged to ride his horse up the stairs and it took just one minute to get up. However, coming down was a different story and it took 45 minutes and the horse was totally exhausted afterwards.

I didn’t really bother to look round the actual shrine so much. A nice koi (carp) pond surrounded by lush green trees offered shade from the sunshine in a tranquil place and there was even a floating torii gate albeit one quite far removed from the famous one at Miyajima in Hiroshima. This one still made for very pleasant viewing though.

On the way to Atago-jinja I passed the wonderful Hie-jinja Shrine (below) which I hadn’t visited since cycling ‘The Ten Shrines of Tokyo‘ back in 2012. The highlight of Hie-jinja is undoubtedly it’s beautiful red torii gates which are proof that you don’t need to go all the way to Fushimi Inari in Kyoto to see such a view. The National Diet Building is only about 500 meters away. 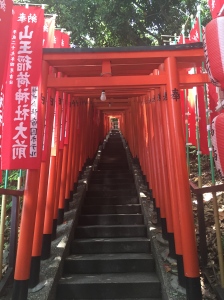 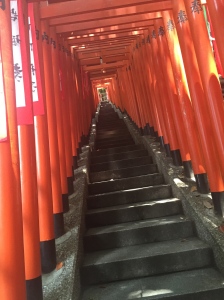 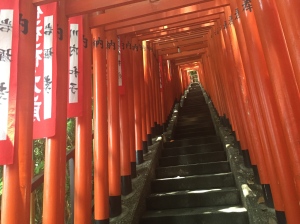 After Hie-jinja I ventured on to snap a couple of interesting-looking buildings which will no doubt appear in the a future Tokyo Modern Architecture compilation post. First up was Tokyo Moto-Akasaka building (1-1-16 Motoakasaka, Minato-ku) (below) which is located very close to Toyokawa-Inari Tokyo Betsuin and not too far from the likes of Hotel New Otani and Hooters! 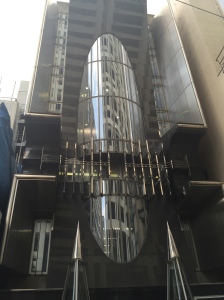 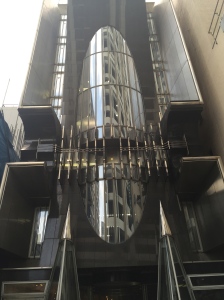 The Toei Ōedo Line entrance to Iidabashi station (below) is something of an architectural wonder and that was actually my first stop of the day as I took a detour to work in Shibuya from the Tokyo Fox Global Operations Centre in Itabashi-ku. This is the work of architect Makoto Sei Watanabe who also designed the Aoyama Technical College (a.k.a the Gundam Building) which featured in the first Tokyo Modern Architecture post back in 2012. 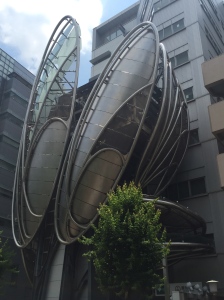 When I first laid eyes on this structure a few years ago I thought it was supposed to be wings of a butterfly or something like that. It seems though that it was designed to look like a living organism developing underground and growing into a gigantic flower. It’s proper use is actually as a ventilation tower, housing the air-conditioning equipment for the subway station.

Not too far from there is the Kagurazaka Hanten restaurant (1-14 Kagurazaka, Shinjuku-ku) which serves up jumbo-sized dishes for FREE…….but only if you can finish within an hour!! There is the mammoth-sized gyoza which needs to be reserved (and paid for) two days before. It costs ¥9,600 as does the 100 gyoza platter. The other two challenges are the triple jumbo ramen (¥1890) and the jumbo fried rice (¥5840). 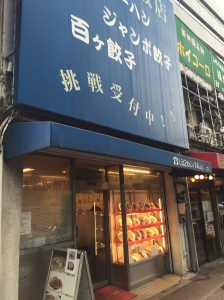 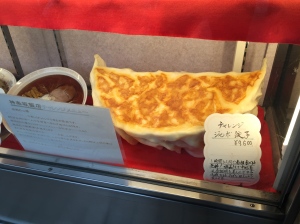 I tried a mountain of tsukemen (dipping noodles) challenge in Zoshigaya once and failed miserably so I know my limits and realise that I have no hope of finishing any of these dishes. Maybe if the giant gyoza was around ¥5000 then I’d be tempted to just say “Sod the money, lets have a go” but reality is that I don’t really have any desire to eat so much in one sitting. Never say never though!

1 Response to The “Rocky” Steps Of Tokyo (+ Some Hidden Gems Nearby!)