The word pacifist came up recently in a book I regularly teach from and I have to admit that I wasn’t exactly sure of it’s meaning. Having looked it up, I realised that the main character in this film was the perfect fit for such a description. Not only does Desmond Doss (Andrew Garfield) strongly not believe in fighting but he is also a very religious man. But this is a war movie I hear you cry! How can such a person be involved in a war when they will not fight? 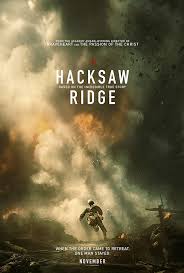 Well, Doss wants to do what he can for his country and so he goes to serve as a combat medic during the Battle of Okinawa. However, he strongly resists all pressure to carry (and indeed fire) a weapon despite all the harassment from his fellow soldiers and his Sergeant. His father is a WWI veteran still struggling to come to terms with the aftermath and he plays an important, if not pivotal role at a court hearing which allows Doss to go to war albeit in a different sense to the usual gun-firing, bomb-throwing soldiers we usually see.

Andrew Garfield is of course no stranger to playing a super-hero but this role is far removed from his Spider-Man one as he portrays an unusual hero. In a film of two halves the first one sets up his beliefs and backstory of why he won’t use arms whilst the second quite brutally (at times) depicts the Battle of Okinawa at Hacksaw Ridge, the site of one of the bravest human feats in history.

As someone who was unaware of Doss’s story beforehand, I had no prior knowledge of Doss’s remarkable act of bravery in the intense and bloodthirsty battle. I did find it a little bizarre that, when the unit below the escarpment were inundated with the arrival of wounded soldiers back from the dead, they didn’t bother to send up some help. It seemed to me like they just waited around for the next guy to be dangled in front of them and let it continue 75 times!

Little did I know until the end credits rolled that it was actually directed by Mel Gibson. His approach is bold and fearless and this harrowing, heartbreaking and inspiring story probably represents his best work behind the camera thus far. I think he managed to combine all the elements which draw in an audience such as character backstory, motivation and progression. Then there was the hero-overcoming-adversity angle which are ever-appealing to many viewers. As for the violence, well he certainly didn’t hold back on that but it’s not too glorified either.

‘Hacksaw Ridge‘ may be set in Japan but it was all shot in Australia with a dairy pasture near Sydney used to re-create the Okinawa battlefield. There are pretty much no scenes from the Japanese side of things and apart from one very short scene, where Doss finds himself in enemy territory, the only time you even see Japanese folk is as they’re being blown to smithereens.

War films can often be something of a slog for me but this one manages to be something more and had me gripped throughout it’s 139 minute running time. Admittedly, I was on a plane to Sri Lanka at the time so there were none of my usual distractions! Anyway, I was really into this film, and can’t deny that the high score is partially due to the amazing story more than the film itself as was the case with ‘Unbroken‘ (2014). Sure, it’s a bit cheesy in places, particularly the first half which is a bit clichéd regarding it’s dreamy heart fluttering romance between two countryside folk. Overall though it is an emotionally gripping and entertaining depiction of the horrors of war and the reality faced at Okinawa.