Due to the content of this film it has never come out in Japan and probably never will (other than maybe a minor release). Elsewhere though, it was released last Christmas but as it didn’t get reviewed on Kermode and Mayo’s Film Review show on BBC Radio 5 Live, this inspirational true story completely escaped my attention until very recently.

Some Japanese nationalists asked for the film and the director to be banned from Japan which usually wouldn’t matter too much but given that the director in this case is the very high profile Angelina Jolie that is unlikely to ever happen, especially given the public thirst for such A-list celebrities visiting these shores.

‘Unbroken‘ is the second feature film to have been directed by Jolie and tells the life story of USA Olympian and athlete Louie Zamperini who went through so much in the air, at sea and on land. This is far more than just a war movie and there’s a lot of story to fit in within the constraints of the running time but Jolie managed to pull out the key elements and, for me, Jack O’Connell is convincing enough in the starring role.

Having already survived one plane accident, Zamperini then suffers a near-fatal plane crash in WWII and spends a harrowing 47 days in a raft with two fellow crewmen. This takes up the first half of the movie in scenes reminiscent of a survival type programme. The action on screen is minimal but nevertheless engaging and this section is not rushed.

The second hour sees them caught by the Japanese navy and sent to a POW camp and this part of the film is somewhat similar to ‘The Railway Man‘ (2013) and, like that story, this one is very much about the incredible forgiveness that these men have offered in the wake of such atrocities from their Japanese capturers.

Louie and his compatriot Phil are separated into different camps with protagonist Louie being sent to a POW camp in Tokyo headed by Japanese sergeant Matsuhiro “Bird” Watanabe who treats him very cruelly due to his status as a former Olympian.

Although it’s set in Japan the production never came anywhere near the country and instead filmed it all in Australia where a POW camp was built at the historic Fort Lytton National Park on the southern bank of the Brisbane River. Other scenes were shot in New South Wales at Blacktown International Sportspark, Werris Creek and Cockatoo Island respectively.

Being unaware of the story beforehand was a kind of bonus as it’s usually better to go into these things without any knowledge. As a result my mind wasn’t clouded by how well Jolie captured the essence of the book. With no preconceived ideas I just watched it and was enthralled by it for the 137 minute duration. Yes, it may have played safe and Zamperini’s character could possibly have been been developed a bit but overall I was more than satisfied.

As much as I like Coldplay, I’m not really a fan of pop music being in films but that is of course dependant on the type of movie but I just felt that this soundtrack was out of place and a more sombre reflective score would have been a more appropriate way of accompanying the initial end credits. 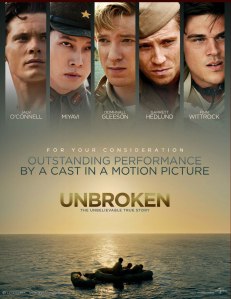 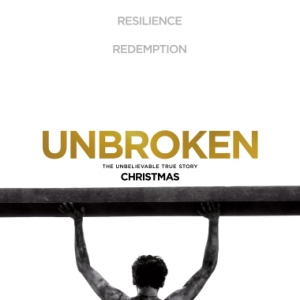