Between late February and 4th July 2020 there was no football in Japan. The authorities were actually very quick to shut down the leagues after the Covid_19 outbreak but maybe a bit slow to get things restarted as other leagues around the world (Korea, Germany) got back up and running with extra interest from football-starved fans.

The first couple of rounds were played totally behind closed doors but two weeks ago fans were allowed back into grounds with a new set of measures and protocols such as temperature checks on the way in, readily available hand sanitizer, compulsory masks, socially distanced seating, no singing or chanting, no flags, no alcohol…and seemingly not too much fun!

Basically, many of the things I like about watching football in Japan have been removed and when I heard this I have to say that I wasn’t interested in attending such games but as I began to see other people return to stadiums the idea of sampling such a unique experience grew and grew.

Compared to other match-days, nearest station Tobitakyu was incredibly quiet when I arrived ready for this J2 League encounter between Tokyo Verdy and Montedio Yamagata. The former is where “Pele” played albeit when they had a different name before the inception of the J-League in 1993. It was actually my first time to watch Verdy live but not Montedio as I went up to see Kashiwa Reysol in Yamagata last June. It absolutely hammered it down on that occasion and it was a pretty wet day too for this one too albeit on a lighter level. 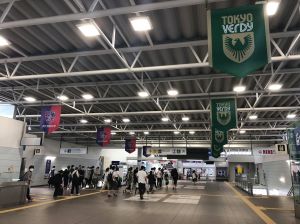 Satisfied with the measures that had been put into place, I didn’t really see it as a risk to go to the game. First up was a temperature check followed by the usual lackadaisical bag search. No hidden alcohol on me this time though as I have been off the booze since the first day of June. 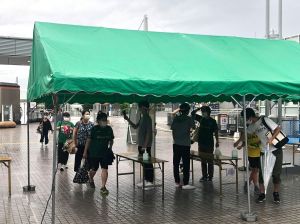 This was my first time back at Ajinomoto Stadium since last years memorable day out for Wales Vs Australia in the Rugby World Cup, and my first live football match (in Japan!) since watching a Nadeshiko League 1 women’s match just under a year ago. The green side of the capital share the 50,000 all-seater stadium with FC Tokyo but, with an average of about 6000 fans (during non-Coronavirus times!), this match wasn’t too different in some ways. For the record, there were 2,072 people at this mid-table game. 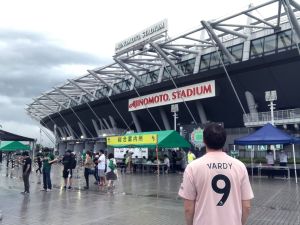 The toilets are now equipped with hand soap and paper towels as the electric drier is not deemed to be safe anymore. Sanitizer is also on hand near the toilet exits. 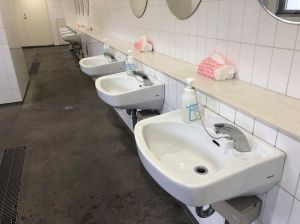 Inside the stadium was eerily quiet and it was hard to believe there was even a game taking place. That was certainly true when I took my seat just over an hour before kick off as there was nothing at all happening out on the pitch regarding pre-match entertainment. The seats you can sit on have been marked with a sign (it has even got English on it!) and the two seats on each side of you are to be left vacant. However, that didn’t stop a couple of guys (one who had his young child with him) from sitting right behind me and ignoring the rules. Did they get asked to move on though?! Of course not! 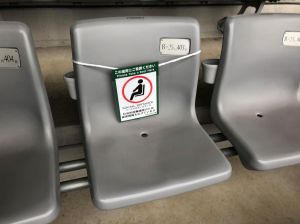 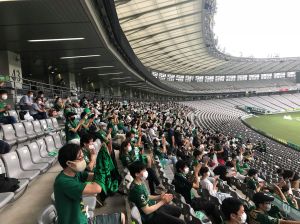 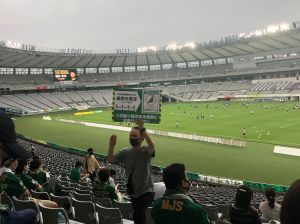 The match began at 6:03 pm (such kick off times are quite normal in Japan) and it was quite a bright encounter for the first half. Shion Inoue broke clear, rounded the keeper but hit the post which was instantly followed up by a block on the line. Another Inoue shot from outside the area curled just wide of the upright and in between his two chances the Verdy keeper Vidotto made a good save low to his left and overall it was quite a good half. 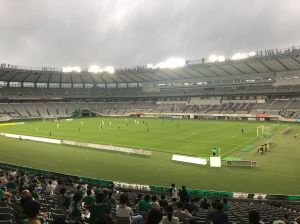 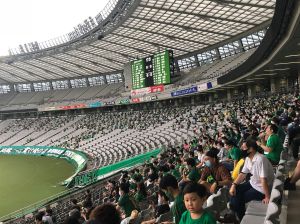 No-one’s come here for a match report though! How was the atmosphere? Now, I’ve watched a fair few games on TV where fake atmosphere has been piped into the feed by the TV companies but what was it like without that? Different, that’s for sure! The usual oohs and ahhs were there but it really did play out like something of a practice or testimonial match. The louder clapping at Verdy corner kicks was a noticeable difference for willing them on but other than that it was like going to the theatre or something! 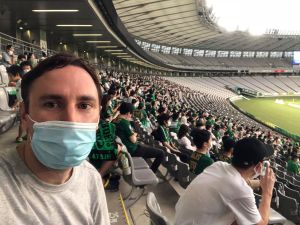 Having to wear a mask is nothing too unusual for most Japanese who often wear them during the hay-fever season or when they have a cold. I have to say that, after 8 weeks back at work, I am used to wearing them now but they getting a bit more uncomfortable as the weather becomes even more humid. 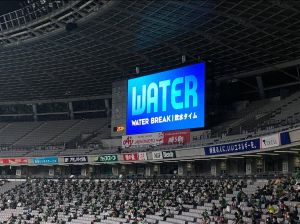 Sadly the second half did not live up to the first one. Although both teams pressed there were only a few half chances and as it moved into injury time (or lost time as they say in Japan) I decided to make my exit. What was strange that no-one else was doing likewise which had me a little confused as fans usually start to head out towards the end of games. For a moment, I even thought one of the new procedures may have been that we all need to stay in our seats until the final whistle. That proved to not be the case but with it inevitably heading for a scoreless draw I was surprised to see only one or two others in the concourse making a sharp getaway. 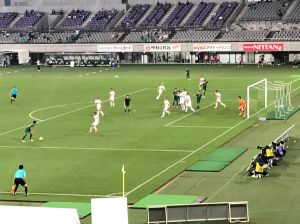 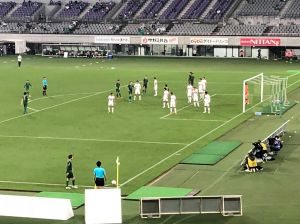 Whilst it was an interesting experience, it’s not really football as I know it and who knows when I’ll next take in a live game! It could be a while!

Click here to read ‘Football Match Held Up By An Earthquake!’

A Leicester City fan teaching English in Japan
View all posts by tokyofox →
This entry was posted in Sport and tagged Ajinomoto Stadium, J2 football, Keio Line, Montedio Yamagata, the new reality of watching football in Japan, things to do along the keio line, Tobitakyu Station, Tokyo Verdy, watch Tokyo Verdy at home. Bookmark the permalink.

4 Responses to What Watching Football In Japan Is Like Now