The Natural Island In Eastern Tokyo You Probably Didn’t Know About!

Think of islands in Tokyo and the mind will likely come up with the Izu-Ogasawara Islands which are two groups of volcanic and tropical islands lying south of Tokyo stretching for 1000 kilometres into the Pacific Ocean. Some others may think of the artificial man-made island Odaiba, Tennozu Isle or even the floating service station island between Kanagawa and Chiba in Tokyo Bay. Monkey Island (a.k.a. Sarushima) is also in Tokyo Bay but it is technically part of Kanagawa prefecture so that can’t be included.

Mention Myoken-jima Island though and very, very few locals will have even heard of it. When I mentioned it to a friend who lives in Kasai she said she was completely unaware of it! If you’re heading eastwards on the Tozai Line towards Chiba then look out the window on your left as you cross the Kyu Edo-gawa River and floating in the middle of the parallel Urayasu Bridge is something resembling a ship. However, that is actually Myoken-jima Island which is the only natural island in Tokyo’s 23 wards according to the Edogawa Ward website. 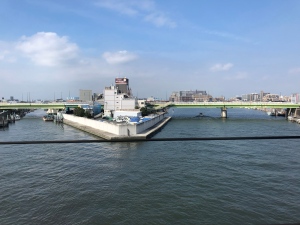 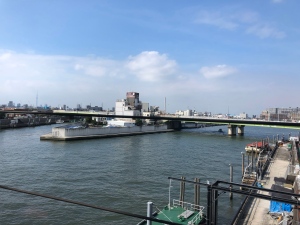 Myoken-jima island is at 3-17-26 Higashikasai in Edogawa-Ku and is a 15 minute walk from Urayasu Station in Chiba. Images of an exotic island should definitely be put aside as this is very much an industrial one with mostly factories and construction covering the land mass. There are a few vending machines but there aren’t any traffic signals or convenience stores which is amazing for a city like Tokyo where the word convenience is rated to be so important. 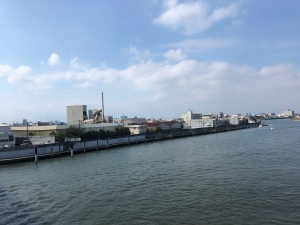 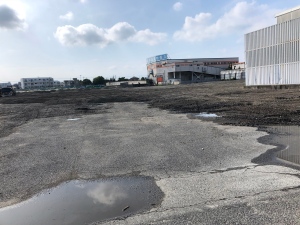 The two maps below show the geography of this island in Edogawa Ward which is surrounded by rivers. The island splits the Kyu Edo-gawa River briefly and then there is the Shin-kawa River to the north-east and the Hikiji-gawa River to the south-east. Chiba really is a stones throw away from the island as that red line on the maps is the border line. The only road on the island is on the eastern side with a couple of short roads branching off on the left of it for very short distances. 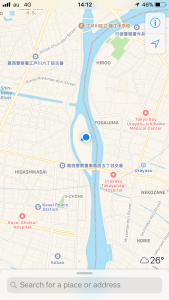 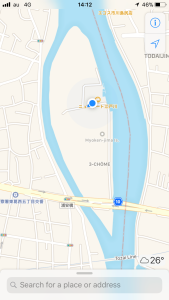 Believe it or not there is actually a seafood restaurant. It’s located at the marina towards the north-eastern part of the island and there is supposedly some kind of shopping area there according to Google Maps but nothing was open on the Sunday when I was in town. 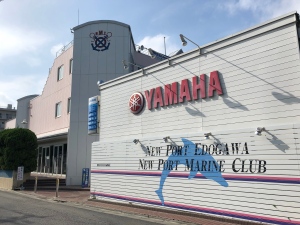 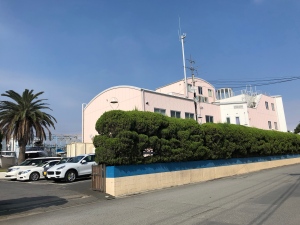 As you can imagine the island is littered with industrial buildings. Whilst some people get a kick out of seeing such constructions, these ones were all rather unremarkable. 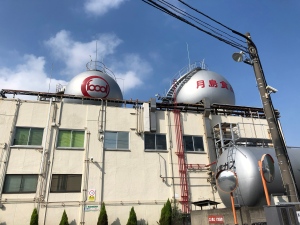 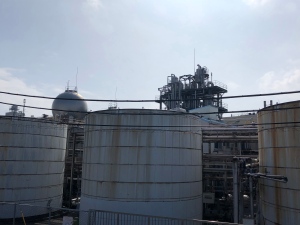 There really is nothing particularly interesting on this island and yet here I am writing a whole blog post about it! A couple of small shrines can be found in the northern part of the island and one can presume they are there for the benefit of construction workers feeling in need of some inspiration from up above. 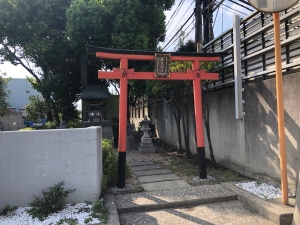 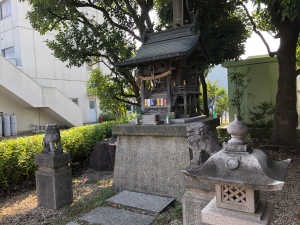 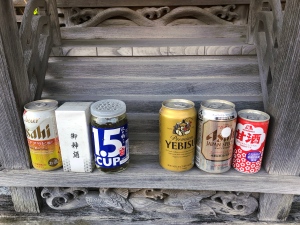 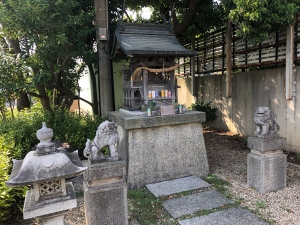 If the first shrine was little then the one a little further up the road is absolutely tiny and almost just fills in a gap besides a factory building. There were a couple of housing apartment blocks nearby and I wonder if they are for the construction workers or are just regular residents. 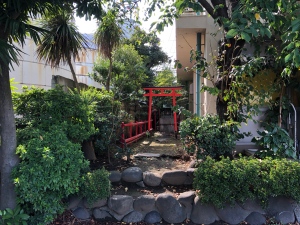 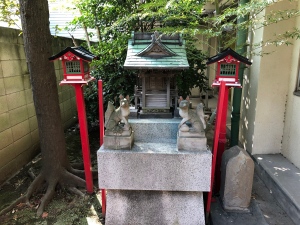 Back nearer the bridge was this tiny shrine-of-sorts * (below) by the side of the road and that really is about as exciting as it gets on this industrial island!

* Not exactly sure what it is! 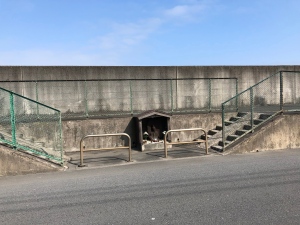 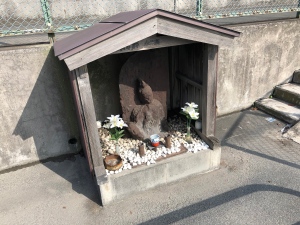 The tallest building on Myoken-jima is located just beyond the bridge on the northern side and it is a hotel. Why anyone would want to stay on the island both bemuses and amuses me. I can imagine that some guy has promised his other half a romantic weekend away on an island somewhere and this is the result! For the record, it is just a love hotel where you rent the room by the hour! 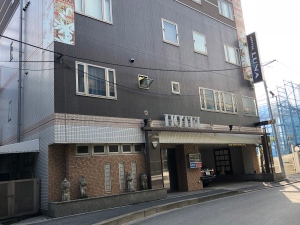 Sad to say it but I did feel like I was in a different world on the island yet it was a very different experience to the usual getaways like secluded gardens or quiet backstreet temples. It was time to leave this bizarre island though after a whopping 25 minutes on it and I ventured a little further south to basically just get a shot of the train going over the bridge in the foreground of Myoken-jima. 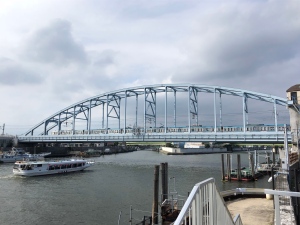 Prior to my arrival at Urayasu, I went to a couple of places on the Shin Keisei Line starting with the big playground panda slide (below) near Misaki Station which featured in ‘Interesting Japanese Playground Structures #15‘. 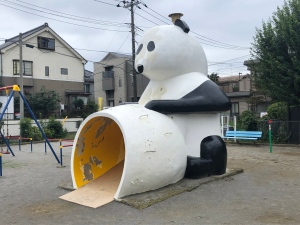 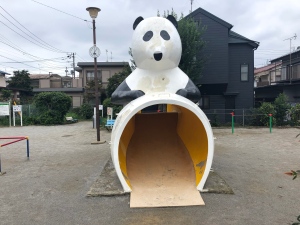 En-route to Misaki, the train passed through a station called Kamagaya-Daibutsu Station which had me intrigued as I can’t resist a big buddha statue. I quickly looked it up on the internet and decided to walk there from the panda slide which took about 45 minutes. It may scale into insignificance compared to much bigger ones shown on Tokyo Fox this year in Tokyo and Sendai among others. At only 1.8 metres tall, it may only be a fraction of their size but it’s still quite impressive. 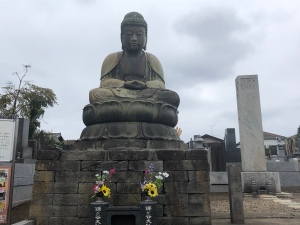 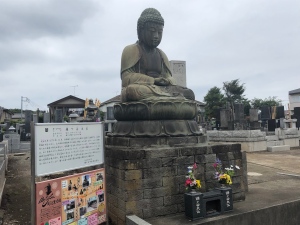 The day actually began out in Chiba prefecture at Imba Nihon-idai Station on the Keisei Electric Railway or Hokuso Railway. Pictures of this were tacked on to the end a post in September titled ‘These Train Stations Have To Be Some Of The Most Interesting Looking Ones In All Of Japan‘. The station building, characterised by it’s clock tower and Tower of Babel dome-like structure, was designed to be a symbol of Chiba New Town once completed in July 2000. As you can see below, I had the train pretty much all to myself that morning! 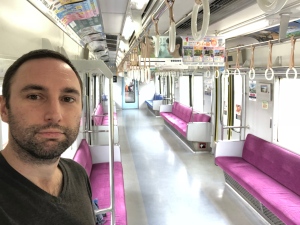 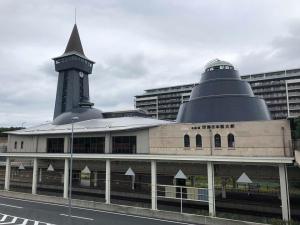 Click here to read ‘Tokyo Daytripper: Monkey-ing About On Sarushima’

1 Response to The Natural Island In Eastern Tokyo You Probably Didn’t Know About!