There’s something alluring for me about the small, local train stations in Japan. They are a far cry from the overly crowded ones I use during my commute on a daily basis in Tokyo. The first two in this post were both visited during my six-day local train tour of the northern part of Japan’s mainland which is more commonly known as the Tohoku region.

Having already seen a uniquely decorated gas tank earlier in the day I then finished it off with a slight detour to see this station on my my journey between Hirosaki and Aomori. Kizukuri Station is just over an hour away from the former on the Gonō Line and is truly unique in appearance as it has a giant 17.3 metre clay figure nicknamed Shako-chan on the exterior. This is definitely not something you see everyday!

Shako-chan’s eyes light up when the fairly infrequent trains approach it. The station worker can seemingly make the lights flash if you ask but sadly I didn’t know this information (e-mailed by a friend) till just after he had knocked off for the evening! 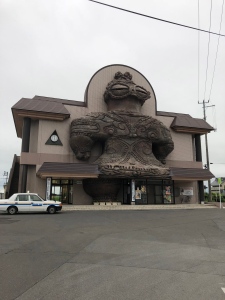 This station, renovated in 1992, is a must see if you’re in the area but sadly the trains are not often at all so you may have to spend a couple of hours in the town. It’s a fairly quiet town but at least there is a park, temple, a shop or two and a restaurant so it’s not a complete lost cause once you’ve taken your photo, seen your train pull away and realised it’ll be nearly two hours till the next one comes along! 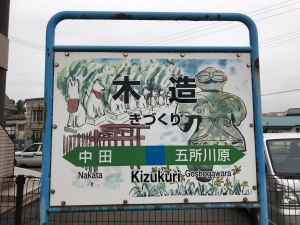 Shako-chan is what is known as a Shakōki-dogū (or goggle-eyed dogū); small humanoid and animal creations of the Jōmon period (14,000–400 BC) of prehistoric Japan. It reminds me a bit of Maz Kanata from ‘Star Wars Episode VII: The Force Awakens‘ (2015) though that’s mainly due to the goggles! Distinguishing features of the Shakōki-dogū are the the exaggerated, feminine buttocks, chest and thighs as well as the patterns which cover the body. 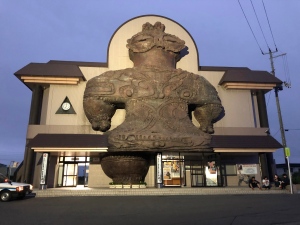 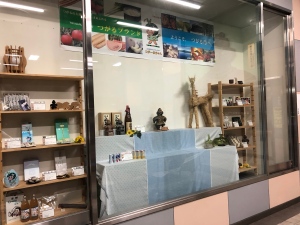 Kizukuri Station is in the city of Tsugaru in Aomori prefecture where such types of dogū were unearthed at the nearby Kamegaoka Stone Age Site and they are very much a symbol of the area and can be seen on manhole covers, signs and souvenirs. 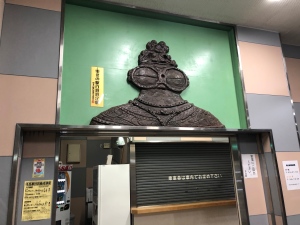 The following night, on the back of my epic journey to Takayama Inari-Jinja Shrine, I stopped at Nukazawa Station which is about one hour south of Hirosaki on the Ōu Main Line. This station and surrounding area made Kizukuri seem like Vegas as there really was absolutely nothing anywhere near this station. No sign of any convenience stores, vending machines or even life!! Nothing! One person got off the train when I did (at 18:27 if you must know!) and that was it. Not a single other person was spotted anywhere near the place until I boarded the next train back at 20:30 which gave me plenty of time to see how many different angles I could basically take the same photo from! 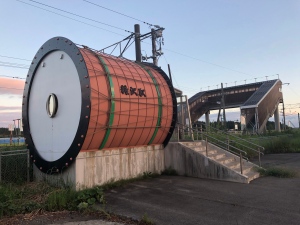 As you’ll have noticed this station consists of nothing much more than a traditional Japanese drum which doubles up as a waiting room. The drum is just under four metres in length and similar in size to the grand drum of the district which is on display at the Museum of Big Drums near JR Takanosu Station which is the next station going south from Nukazawa.

It was just 16 minutes back north to Odate which was to be my base for the night. However, I had to wait a full two hours for that train to come to a station where you only really need one or two minutes to take a picture or two!

Bonus: I often see many things which aren’t really blog-worthy material on their own but given the chance I am always keen to tack them on to the end of vaguely relevant posts. Imba Nihon-idai Station in Inzai is one such example as it’s also an interesting-looking station due to its design. It is on the Keisei Electric Railway or Hokuso Railway in Chiba prefecture.

This building, characterised by it’s clock tower and Tower of Babel dome-like structure, was designed to be a symbol of Chiba New Town once completed in July 2000.