If you thought that Motonosumi Inari Shrine in Yamaguchi prefecture was difficult to get to then that was nothing really compared to getting to this shrine in the north-west of Honshu; Japan’s mainland. The day began in Aomori and from there it was 75 minutes to Goshogawara via a quick change in Kawabe. There was then an 80 minute wait before the bus left at 12:30 pm and that took a further 46 minutes. Even though the bus stop was called Takayama Jinja Iriguchi mae, it was still another 40 minutes on foot from there. Was it all worth it though?

Ironically the only other two people on the 12:30 pm bus were a foreign couple from North America now living in Yokosuka (Kanagawa). I thought my walking pace was quick but that was nothing compared to these guys who inadvertently became my pace-makers as they absolutely blitzed what should be a 40 minute walk. There was a big torii gate early on but that only offered false hope that the shrine was anywhere near. The next gate was the sign that we had made it and all done in just under half an hour too! Not bad.

There are some exceptions but one good thing about shrines is that they are free to enter which probably explains why a skinflint like me has visited so many! As was the case with the last ‘On The Fox Trail…’ post, horses were present at the entrance as one of the animal guardians along with lions and foxes. 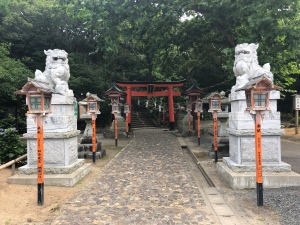 Steps lead up to a quite pretty area but, other than an odd shaped torii gate, there isn’t anything too novel to be seen. 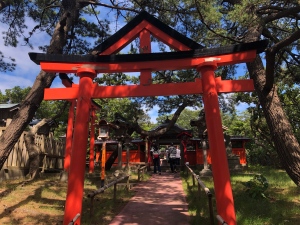 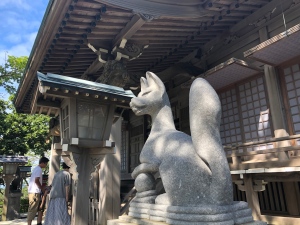 One thing of note was that many of the foxes were dressed in headscarves though I’ve no idea why! Not sure if it’s symbolic or just a fashion statement! 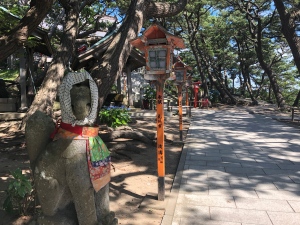 On the opposite side of where we entered, fairly steep steps take you down to some of the most beautiful scenery in Japan. Just because of the water in the vicinity (and the torii gates of course!), it’s easy to understand why it’s compared to the aforementioned shrine in Yamaguchi prefecture but they really are quite different as lily ponds and the ocean are most definitely not the same. The lily pond with red bridge and torii gate is engaging but is only the start of what is about to come. 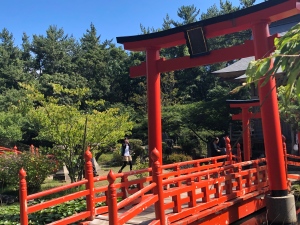 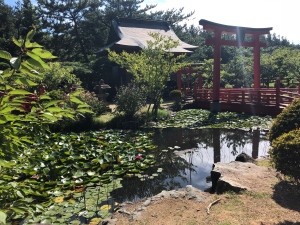 Just over 200 stunning torii gates wind their way gently up the hill through the traditional Japanese garden and it has been said that the line of gates resembles an ancient dragon but I really fail to see that! 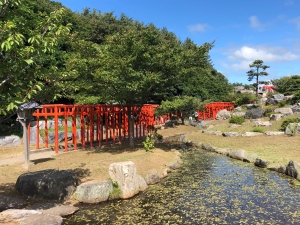 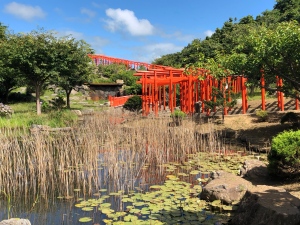 The views from the top were quite breathtaking and I felt rewarded for my efforts in getting to that point. As ever, my photos certainly don’t really do it justice! It was a beautiful sunny day and I’m very grateful for that as, given the rainy weather on all the previous days of my trip, I really did envisage walking round this place under an umbrella. 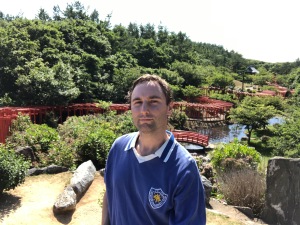 The torii gates meander down the hill and, whilst shooting my amateur video, I was quite surprised to be able to get nearly all the way to the bottom without anyone getting in the way. All a far cry from the overly populated Fushimi Inari Shrine in Kyoto! The views in the opposite direction were pretty nice too featuring a clear water river surrounded on either side by lush green vegetation.

The path leading down to the water was lined with a long row of stone foxes in all different poses which was cool. These foxes have come from all over Japan and, having done their job of protecting their shrines, they now rest here in retirement. In far less spiritual terms, they are too old or broken to remain in their original places of worship!

On the way back to the bus stop I noticed some beautiful scenery that I’d missed on the reverse journey due to striding forwards so quickly without looking back! 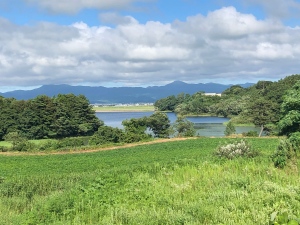 The other couple were already at the bus stop when I returned and true to form the bus turned up exactly on time (15:46 if you must know!) and was scheduled to arrive at Goshogawara Station at 16:37 ahead of the 16:46 train. However, it got a bit caught up in traffic and there were some anxious final moments as I just got onto the train with about a minute to spare but still with enough time to take this shot (below) of two giant masks on the platform.

A Leicester City fan teaching English in Japan
View all posts by tokyofox →
This entry was posted in Japan Travel and tagged 147－2 Washinosawa Ushigata-cho, Goshogawara Station, how to get to Takayama Inari-jinja shrine, On the fox trail, retirement home for foxes, Takayama Inari-Jinja Shrine, Takayama Jinja Iriguchi mae, things to do in Aomori, Tsugaru. Bookmark the permalink.