After the slight disappointment of the Inari shrine centres in Osaka I was a little bit more apprehensive about visiting Toyokawa Inari whilst in Nagoya on a whistle-stop tour of the area. Discovering the night before that it was actually 90 minutes away from the city didn’t fill me with too much confidence either but as I woke up really early I thought I’d make the effort and I was ultimately glad I that I did. 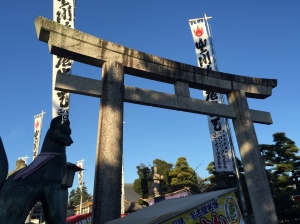 A quick google search of the place before I checked out of my capsule hotel proved that an interesting experience would be in store. I took the 6:30 am Tokaido Line train to Toyokawa via a quick change at Toyohashi and was consequently at the temple shortly after 8am.

The formal name of the temple is Myōgon-ji and it was a ten minute walk down the road  from the station. This is the head branch for the other one is known as Toyokawa Inari Tokyo Betsuin and that can be found in Akasaka. Neither of them are shrines at all but are actually Buddhist temples which surprises just about everyone who associates torii gates with shrines.

It’s all fairly conventional with large guardian fox statues sat in front of the main hall (above) but if one heads to the right (which I imagine many people fail to do!) the place eventually opens up to a corridor of senbon-nobori (below) which is basically 1,000 white vertical banners covered with the prayers of visitors to the temple. 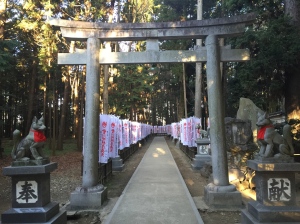 This eventually leads you to the undoubted highlight of the temple, Reiko-zuka (fox spirit mound) which features hundreds and hundreds of stone fox statues. 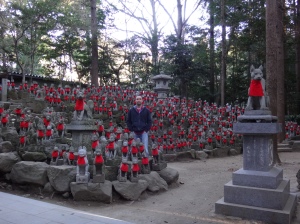 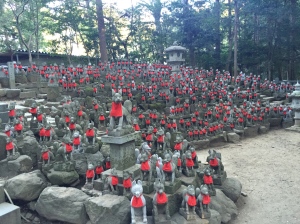 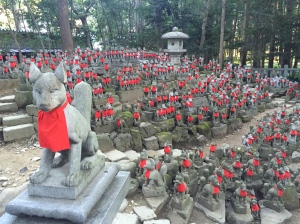 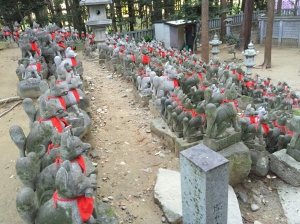 This is a power spot reputed to increase your luck with money and in the midst of all the red-bibbed sitting-pose foxes sits a massive boulder (below) with two larger foxes on top. Many coins have been thrown or placed in the gaps and crevices of the boulder by visitors hoping to become richer. It is believed that anyone managing to get one of the coins out should carry it as a lucky charm and they will one day become rich but should of course return and throw in more valuable coins. 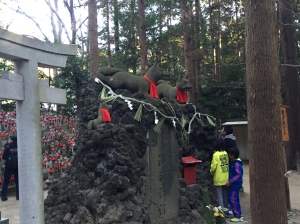 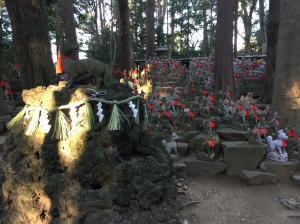 There was a steady flow of visitors to this part of the temple and who knows what they must’ve thought when they saw a foreign guy with a tripod and camera who was not wearing a jacket! It was only about 8:30 and bitterly cold but I wanted to get amongst the foxes in the current (unlucky!) red Leicester away shirt. 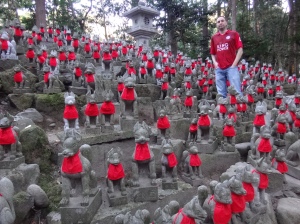 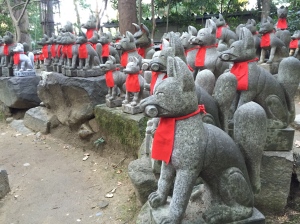 There is an Autumn Festival at Toyokawa Inari with a procession involving two large white foxes (oversize masks borne on the shoulders of two men) with open mouths which devotees place money into as offerings of luck.

As I headed back to the station, the area was starting to wake up a bit and the shops were getting ready for opening with many selling the usual tourist tat as well as some furries as the Japanese call them! 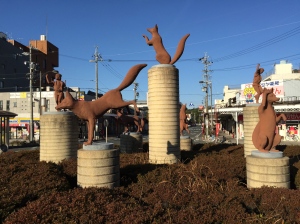 The towns fox connection is recognised both inside and outside the station with statues. 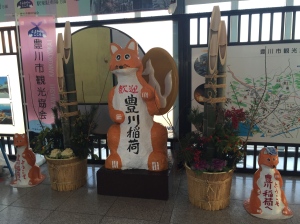 Despite being much further out of town than I originally thought, I was very glad to have visited this temple whilst in that area of Japan. It was just after 10am that I arrived back in Nagoya to experience the sights and tastes which the city has to offer.

19 Responses to On The Fox Trail……At Toyokawa Inari (Aichi)