Whilst watching some of the Glastonbury coverage last year I came across a Japanese band called Babymetal whose name I’d known for many years due to their popularity abroad. However, I’d never heard a single thing by them so out of curiosity I jumped in and watched the live video of a song called ‘Megitsune‘. I was quite surprised to find myself entranced by the mix of heavy metal music and other music influences, highly choreographed dance routines, the energy and a lot of fox references.

Kitsune is the Japanese word for fox but I was totally unaware at that time that ‘Megitsune‘ means vixen (female fox). The story goes that the three original members – Su-metal, Moametal and Yuimetal – were chosen by a mysterious deity called the Fox God to be the saviours of metal. The band wear fox masks from time to time (particularly when performing ‘Megitsune‘), use a fox hand gesture to symbolise the band’s supposed divine inspiration and in interviews they often seem to avoid certain questions by responding with the mysterious (but fairly lame!) “only the fox god knows” line. 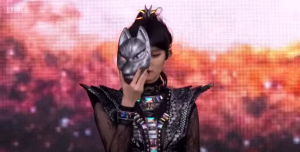 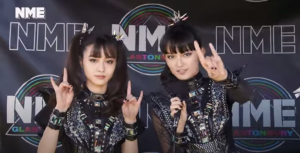 After watching the rest of their eight-song Glastonbury set, I had well and truly jumped on the Babymetal bandwagon and the YouTube algorithm pushed a variety of related videos my way. I watched a fair few including the CallieSakura YouTube channel, and listened to some Babymetal Podcasts too. A recent one focused on all things ‘Megitsune‘ which is still one of my favourite songs not that I know too much beyond their Glastonbury set! 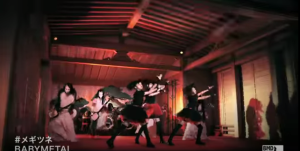 When they talked about there being a Babymetal shrine my ears certainly pricked up. A couple of the hosts recounted their experiences of visiting the place. It didn’t take me too long to get the exact details of it’s location in Asagaya and I had a new place to visit in Tokyo.

However, the rainy season this Summer has gone on for longer than usual so finding the right moment to go was not easy but I just about managed to cycle there and back during a 90 minute dry period. From the outside, it just looks like any normal shrine with a sizeable stone torii gate but just a short walk beyond that is the main filming location for the ‘Megitsune‘ (2013) music video. 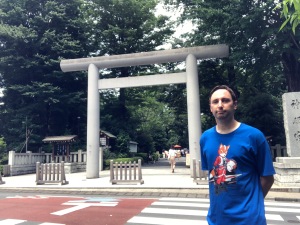 Damn, I forgot to do the fox hand gesture!

The Noh Hall is used for various traditional performing arts, festivals and a Babymetal video! The three girls and the band perform the song on stage with the modern impression of bonsai pictured on the wooden panel behind them. This part of the shrine complex is not open every day so please be aware of that should you wish to see it in all its glory. Sunday seems to be the best bet for when it is open for public viewing. 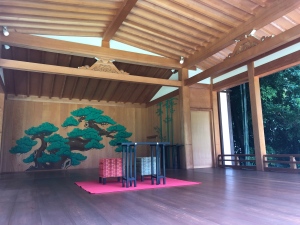 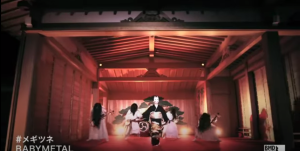 There are some brief speeded-up second unit shots of Hie Shrine (2-10-5 Nagata-cho, Chiyoda-ku) on 1:45 and 1:49 minutes. This is one of the “Ten Shrines Of Tokyo‘ which are considered the most important as they were selected in 1868 by Emperor Meiji after he had moved to Edo and renamed it Tokyo. The beautiful red torii gates also featured in ‘Tokyo Pop‘ (1988) and they are proof that you really don’t need to go to Kyoto to see such an image!

As is common for music videos, a succession of different set-pieces are all edited together quickly including the two shrines but there are a couple of other shots which I am unable to identify. I don’t know if those scenes were shot at the Asagaya Shinmeigu Shrine, back in the studio or somewhere else. If you do know (or have an inkling!) then please leave a comment or tweet me using @tokyofox 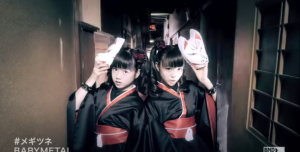 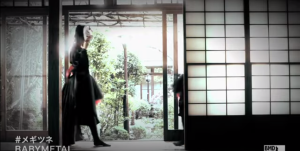 The aforementioned podcast can be downloaded on iTunes or you can listen to it here via YouTube. Hosts Paul, Kevin and Callie start talking about the shrine after 13 minutes.

As for the rest of the shrine, there’s not really anything in the way of fox imagery so the only connection to the omnivorous mammal is simply because Babymetal (and all the fox links they have) filmed a video here.

I though the wooden ema blocks (common at shrines for prayer requests) might have some messages somewhere from Babymetal fans but I didn’t see any.

This shrine has a long 1700 years of history and is a fairly spacious place of worship by Tokyo standards. It seems to be quite a popular place for wedding shots too but for fans of the band it’s more like something of a pilgrimage that has to be made when in Tokyo.

The picture below is courtesy of @hi_0515metal which was retweeted by my friend @ojiyamawa on Twitter. The shop is across from the Shōzoku Inari Jinja (2-30-14 Oji, Kita-ku) which is where the Oji Fox Pageant takes place on New Years Eve. 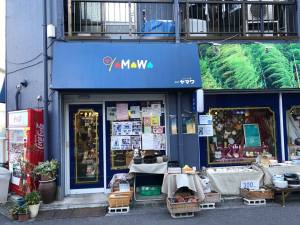 Bonus: On the back of a 2016 world tour supporting the likes of Red Hot Chili Peppers, Guns N’ Roses and Metallica, the Five Fox Festival was Babymetal’s concert tour of Japan in 2017 with shows subtitled Black Fox Festival, Red Fox Festival, Gold Fox Festival, Silver Fox Festival, and White Fox Festival. Each had special requirements for attendance, and were later released on a very expensive blu-ray and DVD box-set.