On The Fox Trail……In Oji (Tokyo)

It’s not only Leicester City taking the Premier League by storm that has made 2016 the year of the fox but also back in March I realised my dream of visiting Zao Kitsune Mura Fox Village in Miyagi prefecture and that was followed by a family trip to the stunning Fushimi Inari Shrine in Kyoto in the wake of Leicester claiming the title.

The Oji Kitsune-no-gyoretsu Fox Parade featured in the ‘TF Top 10……Quirky Japanese Festivals‘ post back in March. A group of local residents, dressed in traditional costumes and wearing fox masks, walk between two shrines on New Years Eve each year culminating in celebrations around bonfires. 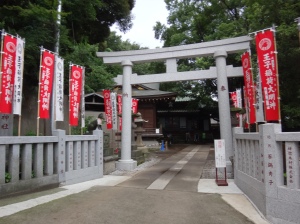 With the new season nearly upon us, and hoping for some luck, I decided to follow the Fox Parade trail from shrine to shrine whilst decked out in the new Leicester shirt and with only my Filbert Fox cuddly toy for company. Starting in reverse, the morning began at Oji Inari-jinja Shrine (1-12-26 Kishimachi, Kita-ku) where the main entrance is actually closed off as it’s deemed to be too close to the school playground which it kind of cuts through at the bottom of the steps. 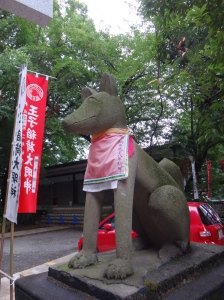 All is not what it seems at this shrine as on first appearance it is a small and basic shrine but around the back are a few smaller shrines which I wasn’t even aware of the first time I visited in 2012. This shrine was my first stop back then when I cycled the “Ten Shrines Of Tokyo‘ in one day. These ten are considered the most important as they were selected in 1868 by Emperor Meiji after he had moved to Edo and renamed it Tokyo.

In hindsight though it appears that mission may be void as I may have visited the wrong shrine! Just a few minutes down the road is the similarly named Oji-jinja Shrine which  isn’t as interesting as the inari one in my humble opinion. Oji-jinja Shrine is a lot closer to both Oji Station and Oji Ekimae. The latter is a stop on the Toden Arakawa Line which is one of Tokyo’s last surviving tram lines and not too far from Asukuyama Park. 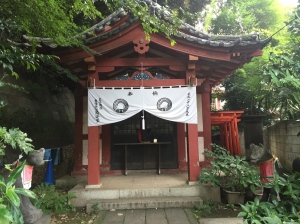 Highlights of the back garden area include an old water pump, many red torii gates, lots of greenery and some peaceful moments in a city where you rarely ever get any space to yourself when outside.

The penultimate shrine possesses a wishing stone and if you’re able to lift it (presumably with your mind!) whilst making your wish then it will come true. 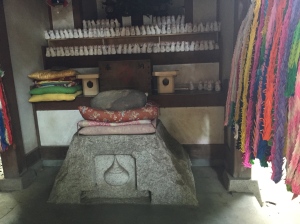 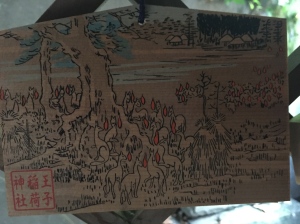 The final port of call at Oji Inari Jinja is another small shrine which is high on a slope. 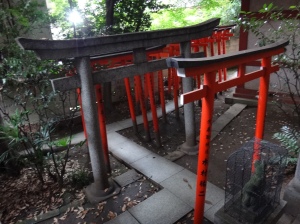 As usual with most shrines and temples, there were some souvenirs for sale including classic Hiroshige art prints, fox key rings (400 yen), ema (prayer request wood blocks) and small white kitsune ornament things (500 yen). I left empty handed this time!

On the other side of the rail tracks, just a ten minute walk away, is Shōzoku Inari Jinja (2-30-14 Oji, Kita-ku) which is a tiny shrine on a quiet backstreet just off the main road. 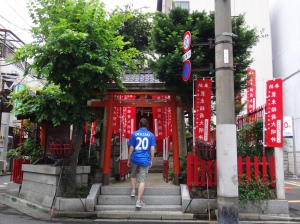 This shrine is the starting point for the Oji Fox Pageant at midnight as the parade begins accompanied by the sound of flutes and drums and it proceeds through the streets before arriving at Oji Inari Jinja Shrine at 12:45am. Information boards outside Shōzoku Inari  give details of the parade and it’s link with the main shrine. 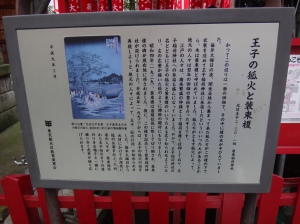 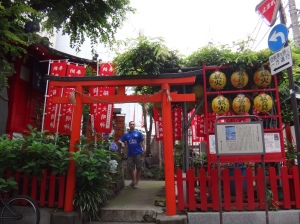 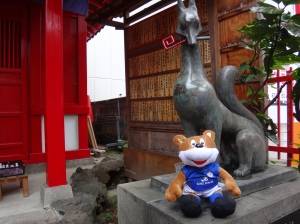 The foxes guarding the shrine have either a star ball or key to a granary in their mouths. The former is supposed to contain it’s soul and it wouldn’t be able to survive if separated from it for long. If you obtain one of these balls then it seems like you can extract a promise from the kitsune in exchange for its return. 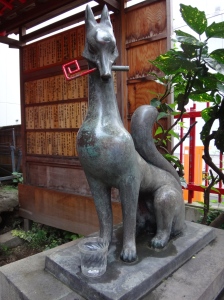 There is a small information centre back on the main road which details the New Years Eve event and the history of the two shrines paying particular attention to a series of ukiyo-e prints by the Japanese artist Hiroshige. The Rurousha blog explains this far better than me but basically white foxes from all over the Kantō region gathered around a big nettle tree and partied away at the shrine. Hiroshige depicted this get-together, known as the kitsune no gyōretsu (fox procession) in a famous woodblock print (below). 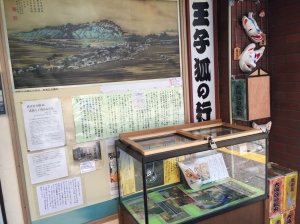 Turn right at the main road and you soon encounter a small independent restaurant (2-3-1 Oji, Kita-Ku) which I decided to visit again having been there with my wife a couple of months ago. It’s famed for it’s soba noodles and so continuing the fox theme I decided to have kitsune noodles. For the initiated kitsune has two meanings in Japanese; one is fox and the other is abaraage. This place has a point-and-show sheet for non-Japanese speakers and the deep fried bean curd in this dish is particularly sweet.

Oji is only about a 25 minute cycle ride away from the Tokyo Fox Global Operations Centre in Itabashi-ku but it was a scorcher of a day and so back home later on I felt it an apt time to crack open the Fox Lager premium craft beer (below) which my parents brought over from the UK back in April this year.

9 Responses to On The Fox Trail……In Oji (Tokyo)