There’s no such thing as a traditional Halloween costume in Japan as witches, vampires and ghosts make way for the likes of Super Mario, Pokemon and so on. Sure, some cosplayers add a bit of scary fake blood to their costumes but there’s no real pressure to conform to what are considered the more common Halloween outfits. With that in mind,  here are some pictures of me and my costume for this year!! 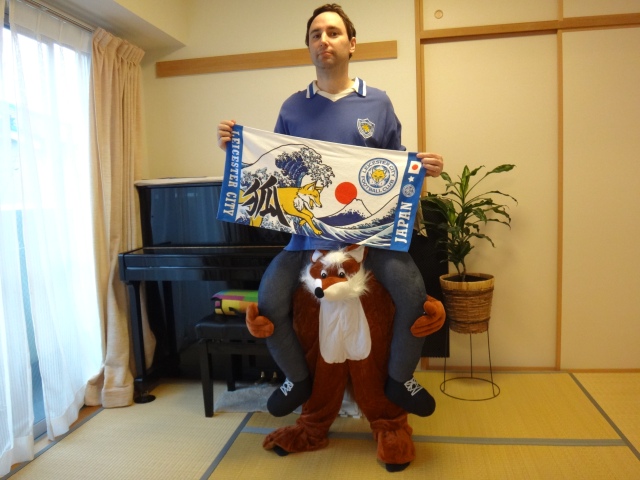 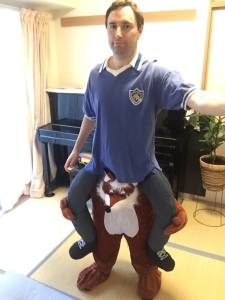 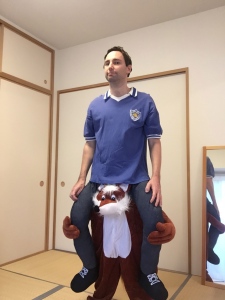 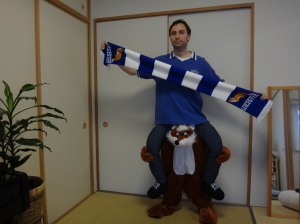 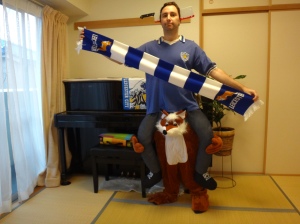 After 5-6 years of wearing Star Wars related costumes (Darth Maul, Jawa and a rebel X-Wing fighter pilot) I thought it was finally time for a change. First thoughts were to go as Marty McFly from ‘Back To The Future‘ (1985) or Nick Wilde from ‘Zootopia‘ (2016). 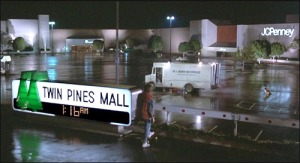 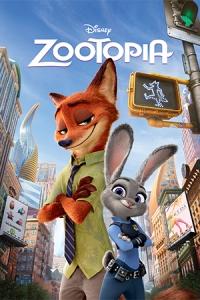 The first one was not as easy as I thought and I was so close to buying the latter but something told me it wasn’t quite right. I just thought I’d look like a man in a green shirt! A real fox costume caught my eye and I was all set to buy that when I saw something which, as far as I was concerned, was comedy gold. I coughed up the necessary dough and had it sent to my parents home in Leicestershire. They then went to great trouble to re-package it all and send it on to the TFGOC. Thanks very much to them!

I actually thought it was a ‘Fantastic Mr. Fox‘ (2009) costume but it seems I misread it as the word Mr was missing! Clever marketing from the company that sells these or just stupidity from me?! Anyway, thats who I will still claim to be should anyone bother to even ask for more detail beyond just being a fox! When I think of Fantastic Mr Fox, I actually think of some commentary lines from both Jon Champion (Jamie Vardy’s wonder strike vs Liverpool at home on the Premier League worldwide feed) and Steve Wilson (Riyad Mahrez’s winner away at Watford on ‘Match Of The Day’) who both used the line as the Foxes closed in on the most unlikely of titles in 2016. The latter very kindly responded to my tweet about such a matter which I was delighted to receive as I’m very much a fan of his commentaries. 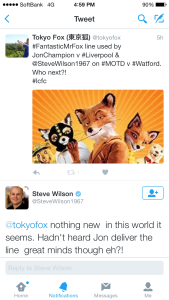 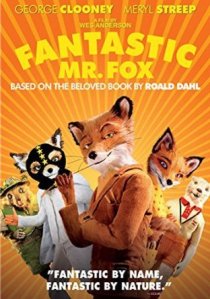 Admittedly, I had hoped to showcase this costume at a shrine alongside some stone foxes and amidst red torii gates but the weather has just been terrible these last couple of weeks with so many rainy days. 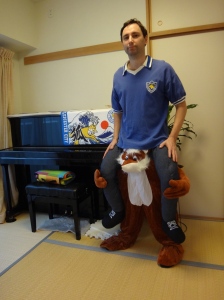 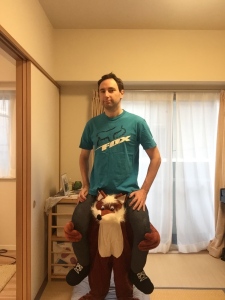 Regular readers of the ‘On The Fox Trail…’ series will know that each post isn’t just about visiting a fox-themed place but is often  extended with the inclusion of some vaguely fox-related food and/or movies. This time it’s a legendary cult figure from British TV in the 1970’s and early 80’s!

This tale (no pun intended!) came about from a recent YouTube clicking session where I came across some old ‘Fantasy Football League‘ shows from the mid-nineties. Basil Brush was one of the guests on it which brought back even more nostalgia as I remembered watching him on TV in the 1980’s as his era was coming to the end not that I knew that at the time!

Of course he is famed for his “Ha Ha Ha! Boom Boom!” catchphrase but, as I watched more and more clips, I just found myself smiling at everything he said in his posh accent and manner. I soon discovered that there had been a new incarnation of ‘The Basil Brush Show‘ on children’s TV for six series between 2002 and 2007. Fox fever got the better of me and I found myself ordering a couple of cheap DVD’s on Amazon; one from the new(ish) show and the other was the ‘Best of the original Basil Brush Show‘. 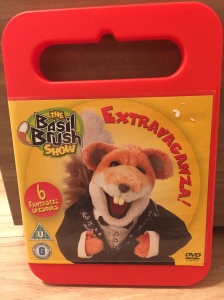 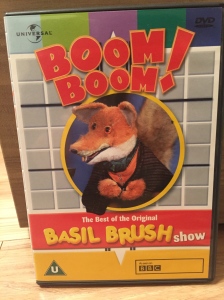 TFGOC is the acronym for the Tokyo Fox Global Operations Centre in Itabashi-ku which is very much an ironic name for those who misunderstand! I basically let my wife organise the place how she likes but there are a few signs of foxiness beyond all the Leicester City merchandise and DVD’s. There a number of fox-related items on the fridge including a lucky charm bought ahead of last years New Years Day Oji Fox Parade which I didn’t even go to! 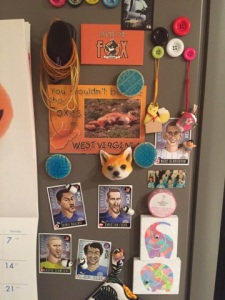 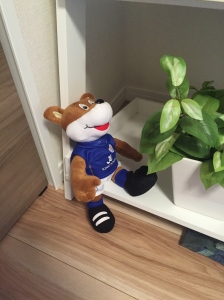 Filbert Fox has now been mascot at Leicester City for 25 years and has appeared in plenty of other OTFT posts but this (above) is his current place to reside in our home.