Following a string of fairly local-based ‘On The Fox Trail…’ posts so far this year, it was time to get back on the road, and whilst I was up in Sendai in June I felt almost obliged to visit Takekoma Shrine which isn’t too far away from Iwanuma Station.

The ‘On The Fox Trail…’ series was only in its infancy when my wife and I went to the relatively close Zao Fox Village (it’s less than 40 kilometres away!) which is also in Miyagi prefecture. I wasn’t even aware of this shrine back then as I only heard about it after I was kindly sent a copy of ‘The Fox And The Jewel‘ (by Karen A. Smyers) which is seemingly now out-of-print.

There’s a map of Japan on it’s inside cover showing all the major Inari worship centres of the country. There are 14 in total with and this one was the tenth to cross off my list but to tell the truth I had really low expectations for this shrine and they were just about met! I had anticipated that it might be as dull as the ones in Okayama, Ibaraki or Osaka. However, all of those did have some redeeming features that made them stand out from your average shrine but this one didn’t in my opinion. Think of this post as a kind of contractual obligation! 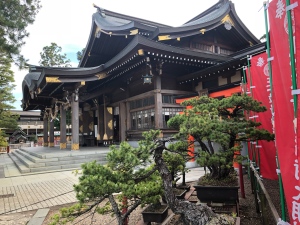 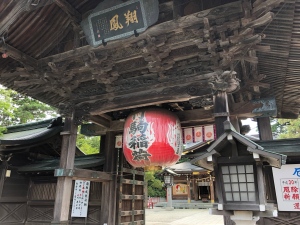 Takekoma has a long history dating back to its foundation in 842 A.D. It is the second oldest Inari shrine in Japan behind Fushimi Inari Shrine in Kyoto and reportedly receives 1.6 million visitors a year but it’s likely that that number is comprised of mainly locals. It is regarded as one of Japan’s three main Inari shrines but as I’ve mentioned before the third one (after Fushimi Inari and Toyokawa Inari in Aichi) often depends on regional pride of the person speaking so it could be in Okayama, Saga, or this particular one in Miyagi prefecture.

I entered via the eastern gate and headed straight inside the complex as I wasn’t sure how long certain areas would stay open as it was 4:45 pm when I arrived! Wooden blocks known as ema (used for writing prayers on) are a common theme at such places but this shrine had a giant one of a fox on the wall of the main hall.

Round the back of the main hall was a bit more interesting for me but nothing too novel of course. Just a few stone fox statues and torii gates as one would expect to see at such places. 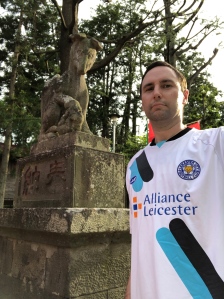 Usually such Inari shrines are Shinto ones devoted to the fox but, like the one at Hyōtanyama Inari Shrine in Osaka, the horse seems to be the star of the show here. There’s a horse statue next to a little garden and pond, and my subsequent research has revealed that there is actually a small horsemanship museum to the right of the main shrine.

The small town of Iwanuma is very much off the beaten track when it comes to tourism but if you’re interested (and I know I’ve not sold it much above!) then Takekoma Shrine is located at 1-1 Inari-chō, Iwanuma-shi, Miyagi-ken. It is one kilometre from Iwanuma Station on the Tohuku Main Line and takes about 15 minutes on foot.

A Leicester City fan teaching English in Japan
View all posts by tokyofox →
This entry was posted in Japan Travel and tagged 1-1 Inari-chō, horsemanship museum, Iwanuma Station, On the fox trail, Takekoma Shrine, Things to do in Miyagi, Things to do in Sendai, Tohuku Main Line, tokyo fox. Bookmark the permalink.