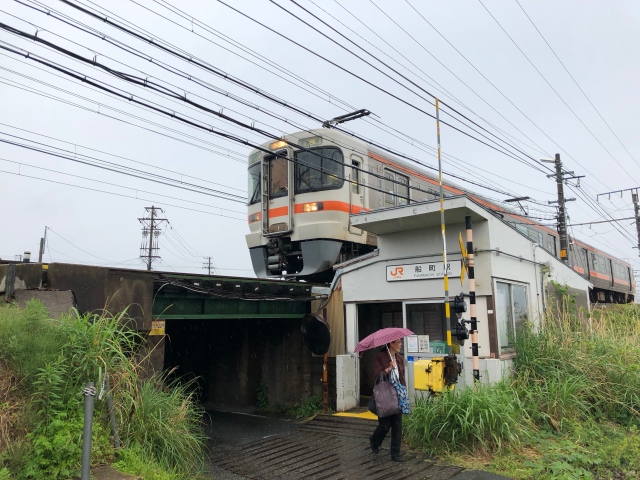 Think of train stations in Japan and the mighty Shinjuku station is sure to come to mind for many people. That is the world’s busiest train station, and Japan monopolises the top 50 list with only five of them not in this country. However, at the other end of the scale are some tiny stations which are usually unstaffed and used by very few commuters.

Average No. of Daily Passengers: 225

There are a few dozen different types of densha otaku (train nerds) in Japan ranging from platform melodies to station lunch-boxes to the stations and trains themselves. I really don’t think I fall into any of the categories or maybe they ALL apply to me as I am ever keen to seek out anything which I consider to be interesting and this is one such instance.

If you thought Kamiyagi Station in Hiroshima prefecture was small, then that’s nothing when compared with this one. Kamiyagi absolutely dwarfs this one which is far from modern looking. Funamachi Station is only a couple of minutes away from Toyohashi Station in Aichi Prefecture.

Sadly I didn’t know about this station when I was in the area last January to visit Toyokawa Inari Shrine but as I went between Nagoya and Izu, I couldn’t waste the opportunity to see it so I took a slight detour. As you can see in the video below I got very lucky as a train actually passed whilst I was filming. I call that a teaser rather than a spoiler!

Funamachi has to be one of the shabbiest looking stations in Japan but that is all part of the appeal for me. I was amazed to find out that it even has a toilet which is outside and located about five metres away from the station facade. 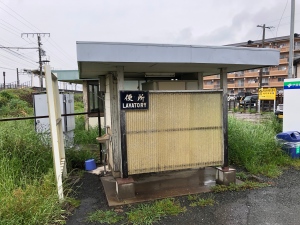 I basically took the two minute trip from Toyohashi to take a few pictures in the pouring rain before the the next train could take me back 30 minutes or so later. This is an unmanned station and there are no ticket barriers, just a machine to swipe your card over for payment of the journey. 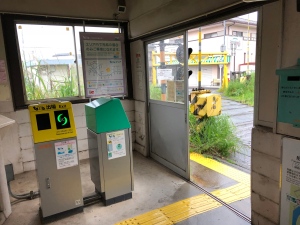 For the record, I had no idea when any trains would pass so I spent the majority of the time just waiting under my umbrella in the rain for them so that I could get a good picture or two but maybe the best photo (at the top of this post) was taken of the same train I arrived on just a minute earlier. 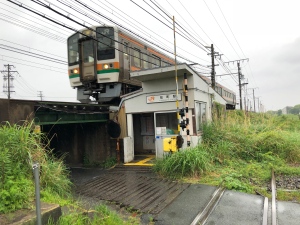 The station basically has an island platform with tracks on either side of it and to get to and from it you need to take the underpass.

Having captured some nice train shots earlier that same morning by the Hotei Great Buddha in Kōnan City, I was delighted to be able to get the picture I really wanted at this one. I headed back to Toyohashi on the next train and from there I continued on my long local train journey back to Izu to meet up with the rest of my family for the second half of my holiday.