There’s something alluring about buddha statues for me and, despite not being in any way religious, I’m always happy to see them. The bigger the better too! I heard about this one last year and it was my priority destination during my fairly limited time in Nagoya recently. Hotei Station lies on the Meitetsu Inuyama Line in Kōnan (north of Nagoya) and takes about 25 minutes to get to. From the station it is then another 15 minutes on foot heading north and following the track. The actual statue wasn’t my first port of call though as I wanted to get a few shots (below) of the trains going by. 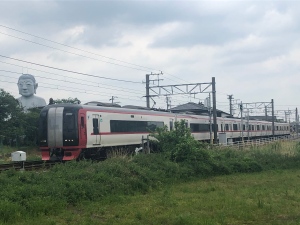 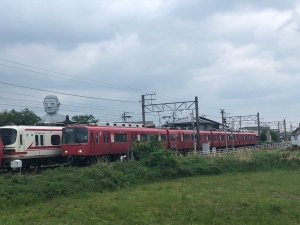 The image I really wanted to capture though was where the traffic signals make it look as if buddha is wearing glasses (below). I hoped I’d be able to get a shot of him with red eyes but sadly the two lights alternated rather than flashing simultaneously.

After that, I moved on to the structure itself and was quite surprised to discover that it wasn’t part of a temple but was actually a privately owned statue with a home of sorts latched on to the back of it. 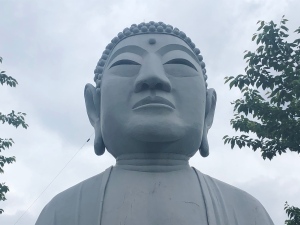 I did meet the friendly owner who told me that his father built it over five years in the 1950’s. Later research tells me that the great buddha once appeared in one of his dad’s dreams at the age of 43 and from then he set out to build it!

The statue’s height is 18 metres which is taller than the Great Buddha’s of Nara (15m) and Kamakura (13.4m). Being able to explore this one was pretty cool and I wanted to see it from all angles including from the top of the home itself which is in a bit of a state.

It has to be said that this Great Buddha is quite bizarre as it has an overwhelming presence in this small and quite residential area in the far northwest corner of Aichi Prefecture, bordering on Gifu Prefecture. 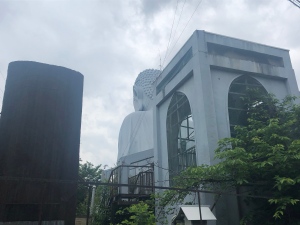 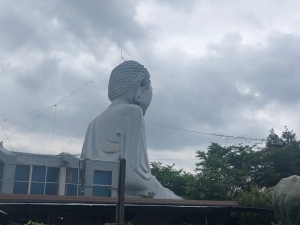 There is a signboard to the front of the Buddha giving brief details of it’s history (below) and next to that is a glass-covered noticeboard featuring old newspaper cuttings showing what the area looked like during the early days of the statue. Fascinating stuff and a place that is definitely worthy of visit. It is lit up with beautiful lights during Spring festivals and at New Year so it would be interesting to visit it then to see if it dominates the area even more than it does out of those season. 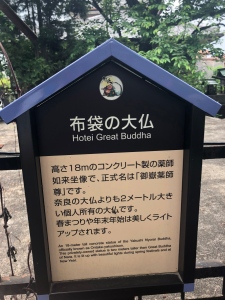 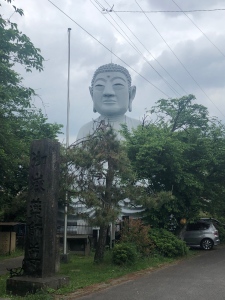