A Giant Maneki-Neko Watches Over This Japanese City

The maneki-neko is a Japanese figurine often seen in or at the entrance of shops, restaurants, pachinko parlours, and other such businesses with the idea that it’s believed to bring good luck to the owner. They are often fairly small and usually made of ceramic or plastic. Some of them have a battery-powered slow-moving paw beckoning customers to enter the place. The cat temple at Gotokuji in Tokyo is absolutely packed full of these cat figurines and this particular town, lying on the western coast of the Chita Peninsula in southern Aichi Prefecture, has also taken the idea a step further! 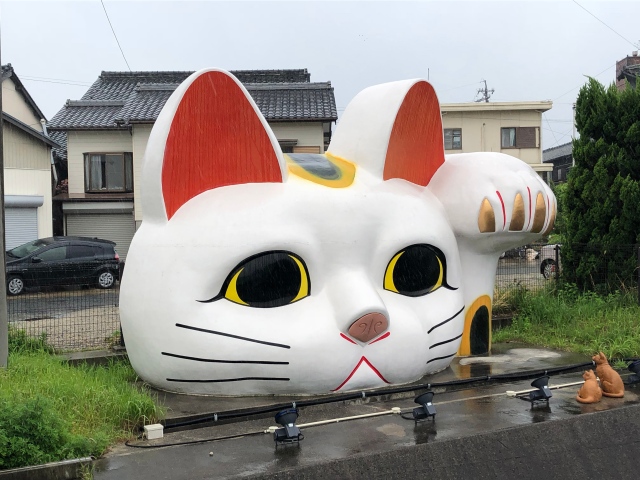 It had been fine weather that morning when I went north of Nagoya to find the Hotei Great Buddha in Kōnan City but as I ventured south of the city the conditions really changed and the heavens opened up as I approached Tokoname Station. The moment I left the station it got heavier and heavier and inevitably I ended up stepping into a puddle almost immediately. After just a few minutes I arrived at the aforementioned feline themed street and then had to work out how to get up to the cat! I wandered a few alleys full of pottery shops and headed in the general direction (aim for the green bridge up the street!) based on instinct and for once my instinct actually served me correctly and I located it. 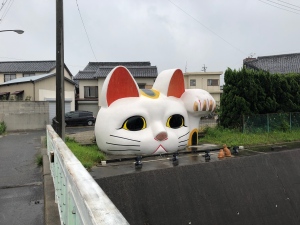 With the rain streaming down it really wasn’t easy holding an umbrella and trying to use a selfie stick to get a picture in front of the cat which is over three metres in height.

Back down on the street beneath the huge invincible cat are lots of various cat-themed ceramic art works lining the street. 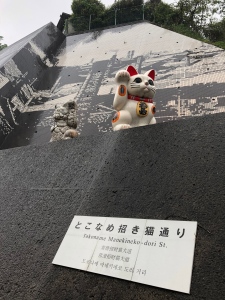 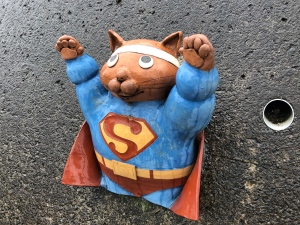 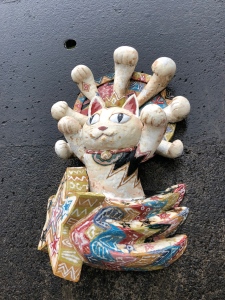 Tokoname Station is on the Meitetsu Tokoname Line which continues on to Central Japan International Airport. I didn’t have exact details of where it was beforehand but thankfully it is visible from the station platform so you can guess the vague direction from that but be warned that it’s not so straightforward once you leave the station as it disappears from view and you need to climb up round the back to get to it. The address is 2-14 Sakaemachi.

On the way to my next place I had to change trains at Oe Station (below) which has to surely be the shortest named station in Japan when written in English. I know there is a place called Tsu (つ) in Mie prefecture which is just a single Japanese character and yes, this kind of thing really does interest me! 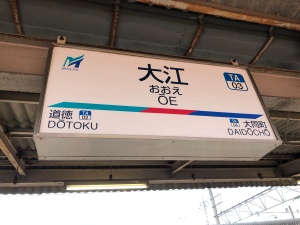 Just after Oe station was Dōtoku Station and just a few minutes walk from there was the giant whale which featured in ‘Interesting Japanese Playground Structures #13‘.

On my previous visit to Nagoya in January 2017 I went to a tiny playground area about 15 minutes walk from Kanayama station which was home to a unique dog building built back in 1986. It’s actually a warehouse used by firefighters. When coming up with an idea for the building they didn’t just go for your typical bricks and mortar style but instead wanted something popular with children (maybe because it’s in the playground!) which is why they chose the dog. It was also because they thought it would nicely compliment the big maneki neko in Tokoname. 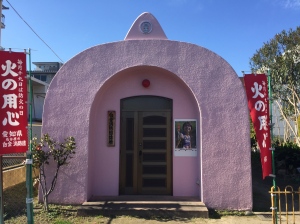 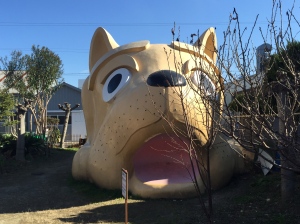