One Of The Most Mystical And Picturesque Power Spots In Japan

Much has been written about the sight of hundreds of beautiful red torii gates at the likes of Motonosumi Shrine (Yamaguchi), Takayama Inari-Jinja Shrine (Aomori) and of course the hugely popular Fushimi Inari (Kyoto). They are all absolutely awesome places but there’s something equally interesting about seeing just a solitary red torii gate amidst a stunning setting.

One such place is on the east coast of the Izu Peninsula but I didn’t know about it until a year or two ago. Not only that but I had actually been to the area a couple of times and hadn’t noticed it! It was time to change all that so my wife and I took Maron down to Shirahama Beach for his first proper experience of sand and sea. 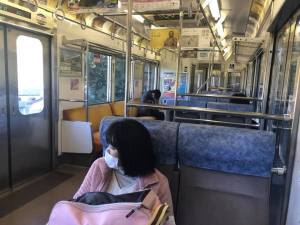 Not a bad place to start as this beach is one of the most beautiful in all of Japan. We took an early morning Izukyuko Line train down to Izukyuko Shimoda Station way back on the final day of last year. From the station it was then a 15 minute bus ride to the shrine. Look closely at the pictures above and below and you can see his eyes staring out from his bag! 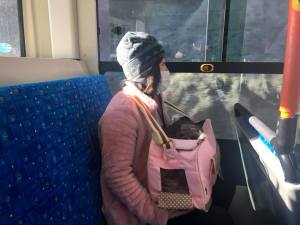 The bus stops directly outside the shrine but we initially bypassed that to get on to the beach. The last time I visited was rather fateful as within a couple of minutes of stepping on to the sand the heavens opened up and it began to pour down with rain. No such luck this time. The red torii gate below is the gateway to the beach.

A mere matter of seconds later and you’re on the beautiful white sand beach with the solitary torii gate clearly visible in the distance on the rocks. In fairness the first time we came here we were on the other side of the cove so wouldn’t have been able to see it. The dog had no interest in the torii gate of course but he was in his element running around the beach and it was a real joy to see. 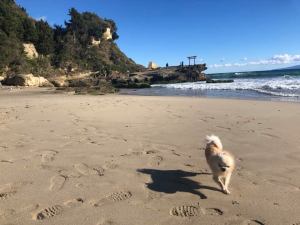 Access to Daimyojin Rock had to be done via a little jump to avoid the incoming tide.

The red of the gate in contrast with the light blue colour of the ocean makes for a scenic view, and with no one else around we were able to get a range of selfie shots. 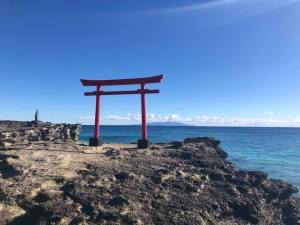 The main shrine was of secondary thought really but naturally it had to be seen and thankfully it didn’t disappoint. It is known as the oldest shrine in the Izu area and has a long history dating back 2,400 years. People visit the shrine for a number of reasons (business prosperity, family well-being, traffic safety, warding off of evil etc) but the primary reason seems to be love and marriage.

Just beyond the torii gate entrance is a gigantic juniper tree which is estimated to be over 2,000 years old. The spiritual among you may be interested to know that it’s a power spot which supposedly extends one’s life. Not only that but it is also a prefectural designated natural monument. 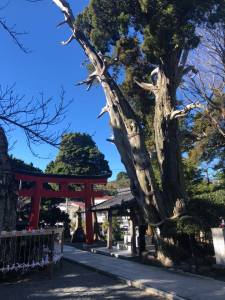 When we turned up, the shrine was ready for the following day’s Hatsumode (first prayer of the year) festivities with a ring to walk through and an array of colour pens on hand for people to write their hopes for 2021 on the wooden ema plaques.

It’s actually the fire festival (Hitachi-sai) in late October which is the big one for this shrine when torches are lit to offer prayer to the deities of fire. Anyway, to the left of the main hall are a few torii gates which lead up some steps.

Just a short distance in to the trail is a little shrine with a load of little white porcelain foxes on display. 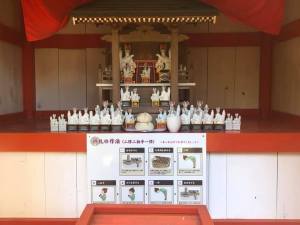 Once we were done with the shrine, we returned to the beach for another look at the mystical and picturesque torii gate before taking a leisurely stroll down to the other end of the beach.

The wonderful Shirahama Beach is said to be visited by 300,000 people a year which is presumably a pre-Covid_19 stat! There were just a handful of people present on the day we were in town but I’m sure it’ll be a total different story next time! 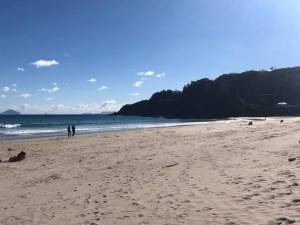 Click here to read ‘One Of Japan’s Most Beautiful Beaches Plus A Dilapidated Castle, A Loop Road & Shizuoka Cola’

A Leicester City fan teaching English in Japan
View all posts by tokyofox →
This entry was posted in Family, Japan Travel and tagged best beaches near tokyo, bus from Izukyu-Shimoda Station to beach, Daimyojin Rock, Ikonahime-no-Mikoto Shrine, izukyuko line, Shimoda, Shirahama Shrine, things to do in izu, things to do in shizuoka. Bookmark the permalink.