Back in early May it was the Japanese holiday season known as Golden Week and my wife and I (despite yet another State of Emergency in Tokyo!) decided to still head off as planned to the Izu Penisnula to spend a week at my parents-in-law`s house. The Odoriko Line train actually runs directly from Ikebukuro to Ito which is pretty much door-to-door for us. Sadly there is only one of these express-style trains each day from Ikebukuro so we ended up taking the Metro to Yokohama and then transferring to the Odoriko there.

And they say riding on transport`s dangerous during these coronavirus times!

It wasn`t always so friendly but the two dogs got on much better than on their first meeting. Back then it took a few days to get used to having one another round but it was a bit quicker this time, and they even slept together on the armchair as you can see in the picture collage below.

Other than spending time with the dogs, there wasn`t too much going on in the first few days so I had to make my own entertainment and this beer-like challenge was one such way to fill an evening. For the record, the result of this pointless of taste tests was that they were better than expected with the blue one (6% alcohol) the best and the orange (5%) the worst.

The Barreal Topvalu best price * challenge is for real & that is this evening’s entertainment!!

My brother-in-law`s family arrived the next day just in time for lunch! I have to admit that I was not expecting to see such a cup noodle feast!

No not a p*ss poor cup noodle food challenge but a family lunch like no other! I cleared the table AND did the washing up afterwards!! pic.twitter.com/ED1A1qMtPr

I should add that I am in no way complaining about the above as we receive many, many great meals whilst staying there. Besides, I like cup noodles and loved the idea of the whole family eating such food as a meal! Other meals included sukiyaki and sushi.

Thinking I could use a gift card in my possession, I treated my mother-in-law and wife to an evening out at family restaurant Gusto on our final night. Oh the glamour! I ordered the cheese-in burger as I had seen it in a YouTube video and thought it looked quite nice. I was right not that I really know what a good burger is as I rarely eat them. Thinking we had money to burn we over-indulged more than usual but typically when I went to pay with the card I was told that they didn`t accept them so had to pay with cash! 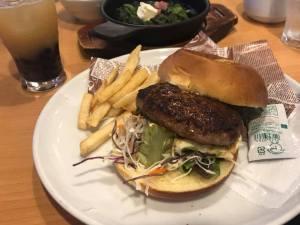 There are quite a few restaurants nearby. As well as Gusto there is the golden arches and to get out of the house and take a break my wife and I did go there to try one of the Milky McShakes which were new at that time but have probably disappeared from the menu such is the way of life in Japan where new lines come and go quickly all the time.

Went in to get us some Milky McShakes but then ordered a couple of extra items! pic.twitter.com/kBHOo4uIiL

The particular day when the rest of the family arrived just happened to be May the 4th (a.k.a. Star Wars Day!) and I did get to play lightsaber fights (of sorts!) with my nephew. With just one lightsaber though it wasn`t the greatest duel!

Playing a simple game like catch-ball with him in the garden was a particular highlight of this trip. Using the wii was a far more modern way of keeping him entertained!

When you`ve got two dogs though you`ve got all the entertainment you need maybe! 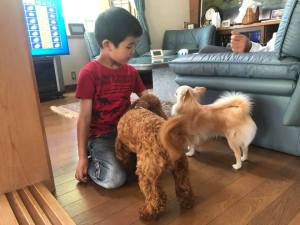 We always go to Mount Komuro on any trip to Izu. Often multiple times too! We certainly go when our dinosaur-fanatic of a nephew is in town as he loves Dinosaur Space which is near the peak of the mountain. 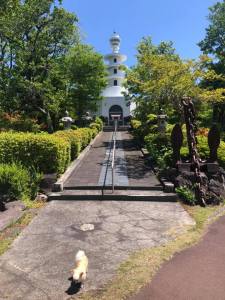 At the top of the 321 metre tall mountain we all went to the newly-opened Cafe 321 which has panoramic views of the sea and mountains from it`s terrace. When we were there my  nephew remarked that it had been such a happy day which were quite sweet words for someone so young!

As ever in Izu we were at one with nature in Izu and taking the dogs to usual hot-spots like the Jogaskai Coast (below), Mount Komuro & Ippeki Lake was very rewarding.

A Leicester City fan teaching English in Japan
View all posts by tokyofox →
This entry was posted in Family, Japan Travel and tagged Barreal Topvalu beer, Cafe 321, Dinosaur Space, Jogasaki Kaigan Coast, Komuroyama Park, Nissin cup noodle, things to do in izu, things to do in shizuoka. Bookmark the permalink.