A Football Stadium Amidst Stunning Surroundings? I Give You FC Gifu!

Since 2015 I have always attended at least one football match in the Golden Week holiday in Japan. Previous grounds have included Sanfrecce Hiroshima, Vi$$el Kobe,Shimizu S-Pulse, Fujieda MYFC and Gamba Osaka. Just because of my occasional Twitter interaction with a couple of FC Gifu fans, their stadium has long been on my list of places to go so whilst in Nagoya I saw it as a good opportunity to add another Japanese stadium to my list. Fact is that it’s probably easier to get to the Gifu Nagaragawa Stadium from Nagoya than it is to get to the home of Nagoya Grampus itself!

Twitter often gets a bad rap for its more sinister side but for a nobody like me it’s been a very useful tool for making contacts, especially within the fairly niche community of native English-speakers passionate about Japanese football. One such person is ‘J-Soccer‘ and ‘When Saturday Comes‘ contributor Stuart Smith who also makes regular appearances on The J-Talk Podcast where he offers his expert opinion and insight into the goings on of J2; a league that has been claimed (by Charlie Houghton of Football Radar) to be the greatest second tier in world football!

After climbing down Mount Kinka (where Gifu Castle is located) and taking a quick foot spa (thanks for the recommendation GifuRichy!), I was outside the impressive main stand at about 5pm. I mailed Stuart and he said he’d be out to meet me soon only I had no idea what he looked like as I’d never seen a picture of him. I put my fluorescent yellow Japan shirt over the top of my t-shirt so that I’d be easily recognisable not that I really needed to as the number of foreigners present was in single figures for sure. It soon became apparent who he was when we met minutes later and it was very nice to be able to put a face to the name.

We wandered down to the yataimura (food village), located behind the main stand which I’d read about four years ago on his We Are Gifu blog. His recommendation was the Hida beef croquette which was a good choice as the lines were far shorter for this delicacy than some of the other food options. 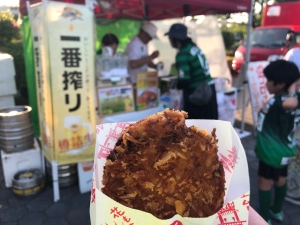 The visitors were FC Ryukyu who I have lent my support few times in recent years, most notably at their home ground in Okinawa itself three years ago. I dare say that if I hadn’t met up with Stuart, I would have joined the away fans for this one too. Having purchased my ticket for 2,200 yen, I took a seat on the grass verge behind the goal whilst I waited for Stuart to reappear.

Once he did, I followed him round to the side for a better view of the action alongside his wife. She has not too subtly been blurred out as she doesn’t want the fame and fortune which comes with being featured in a Tokyo Fox blog post! Seriously though, this is quite a common occurrence for Japanese people on social media.

Kick off was at 6:03 pm (such times are fairly normal in Japan) and the visitors started very strongly with a couple of early chances before taking a 13th minute lead with a great strike by Kazumasa Uesato from 23 metres out. Ryuyku had further chances and the Gifu goal was leading a charmed life as the frame of the goal saved them on three occasions. The home team were lucky to not go in three or four down at the break.

Half time felt like a poor-mans version of the Queen Live Aid concert (even the ‘Ay-Oh‘ freestyle bit from Freddie Mercury was included!) which has become even more famous in recent times due to its inclusion as the finale of the hugely successful ‘Bohemian Rhapsody‘ (2018) movie. I wasn’t really watching but I think it was a group of cheerleaders dancing on the pitch whilst some karaoke version of Queen songs were being played or even sung live!

The second half was a different story as FC Gifu came out more determined and aggressive. An equaliser finally came in the 76th minute via a powerful header from Ryoichi Maeda. Better was to come as they took the lead with five minutes left when Nagashima did a neat one-two with Maeda on the edge of the area and hit a left foot shot into the bottom corner. The remainder was backs-to-the-wall stuff and the Gifu goalie Jan Ole Sievers made an unbelievable one handed save from a close range header and somehow the follow up shot was then blocked on the goal line when an equaliser seemed certain. 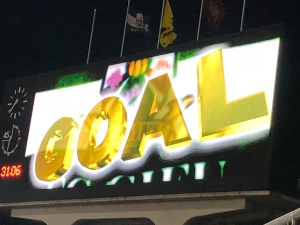 There was relief all round at the final whistle as FC Gifu got some much needed points in their inevitable relegation dogfight at the foot of the J2 table. I didn’t hang about at full time and left to get the bus back to the station followed by a train to Nagoya. I needn’t have rushed really but it’s kind of become a habit to make a sharp exit and beat the crowds a bit.

The FC Gifu stadium holds just over 26,000 seats but only 6,692 were there to watch this great match which was quite a rare win for the home team who have been perennial strugglers towards the foot of J2 in the last ten years. The all-too-common sight of a running track is compensated for by the beautiful setting of this stadium surrounded by mountains.

Click here to read ‘Another Giant Buddha But This One Is Made Of A Very Unique Material!’

5 Responses to A Football Stadium Amidst Stunning Surroundings? I Give You FC Gifu!