Day Trip To The Toyota Stadium!

Nagoya Grampus Eight (as they were known back then) were the first team I knew of in the J-League back in the early 90’s when Leicester’s favourite son Gary Lineker announced he was moving to Japan. A few years later the team name was heard yet again in England when Arsene Wenger left them to become the new Arsenal manager.

When I first arrived in Japan I even thought I might support Grampus but things never quite panned out like that and I ended up becoming a fan of Kashiwa Reysol who were my local team back then. However, visiting the home stadium of Grampus (a different one to where Lineker played at) was still something I wanted to do and for a long time it’s been on my Japan bucket list.

Over the last few years I’ve been to many grounds around the country (including some very far flung ones) but Nagoya has always eluded me. The trip to see Gamba Osaka at the end of April reignited my interest in going to some of the further bigger stadiums and so I scanned the fixture list to see when was good for Nagoya. By sheer luck I didn’t have to wait to long at all as there were a couple of Sunday games in May (I work on Saturdays when most rounds of games tend to take place in J1) and the latter of the two was at home to my Reysol boys and so, with my wife working and no Premier League games to distract me, it was a good time to go. Furthermore, it was during the nice warm Spring season too.

The night before I went to my parents-in-law’s house in Izu and the next morning I took the Shinkansen from Atami to Toyokawa followed by local trains to Okazaki and then Shin Toyota. With a name like Okazaki I couldn’t resist a photo or two in honour of Leicester’s samurai hero Shinji. The Aichikanjo Tetsudo line is the one which takes you on to Shin Toyota and it is on Platform 0. There’s always something magical and mystical for me about such a thing. It’s not quite Harry Potter-like but is enough of a rarity for me to appreciate it even though I’ve seen a few of them now on my travels around Japan. 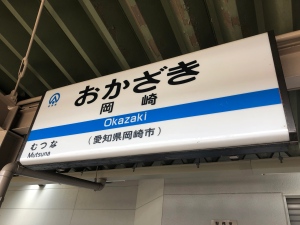 I arrived at Shin Toyota Station at about 12:15 and the first thing I wanted to see was Toyota Ohashi Bridge (below) with its abstract form and swooping white bannisters. 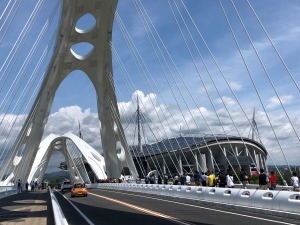 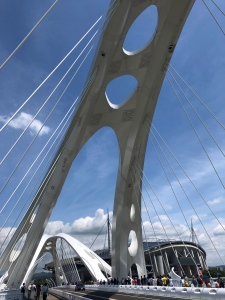 As you can see, this architectural wonder of a bridge lies right next to the stadium and takes supporters across the Yahagi River. The two structures, both designed by Japanese architect Kisho Kurokawa, were built to complement one another. 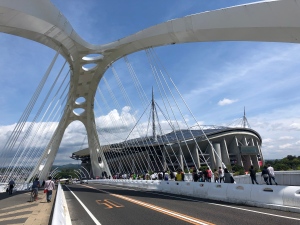 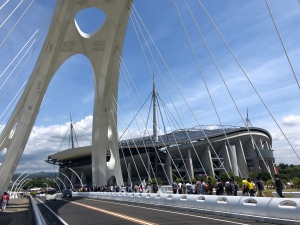 Due to the Lineker connection, I thought I’d wear the 1983-85 retro Leicester City shirt which he wore himself during his glory period at the club. There are some good articles to read here and here about Lineker’s time in Japan for anyone interested in what he did before he flogged spuds and started talking about kicking a ball about! 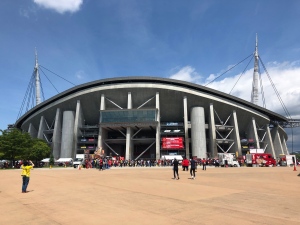 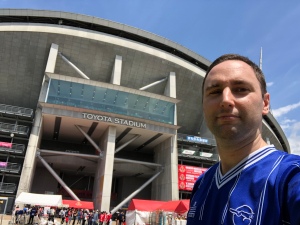 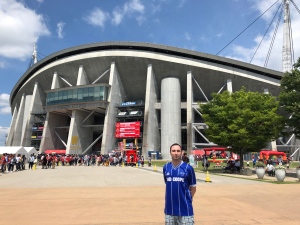 As ever I had no ticket before arriving at the stadium but with a capacity of 45,000 I was never too worried about getting one. As it was, the attendance was under half of that with 21,327 there. 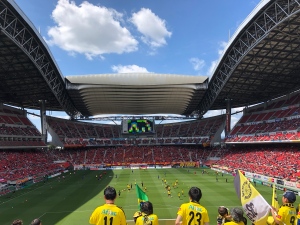 Just ahead of the 14:03 kick off (yes, really!) the word “Glap” appeared on the screen which I first thought was an awful spelling mistake but then figured that it’s surely a special kind of Grampus clap which someone thought to call a glap!

The first goal went to Reysol thanks to a good finish from Ataru Esaka on 16 minutes and a stunning equaliser was then denied by the offside flag. When Grampus had the ball in the net soon after that there seemed to be some confusion as to whether it had been allowed. I thought it was offside too but the goal stood and the match was tied at 1-1.

During the first half I’d noticed a German Reysol flag down the front and I then realised that it must belong to a German guy called Benjamin who had messaged me earlier in the season in the wake of my tweets about watching Reysol. At the break I went down and introduced myself to him and had a bit of a chat.

We didn’t have to wait long for a goal once the second half resumed. Yuta Nakayama was left unmarked for a free header from a corner kick and Reysol’s advantage was restored. Things got even better on 56 minutes when a Grampus mistake at the back allowed Esaka to go through and cooly finish in the one on one with the goalkeeper. 3-1 and I started to think that it was game over. Big mistake! 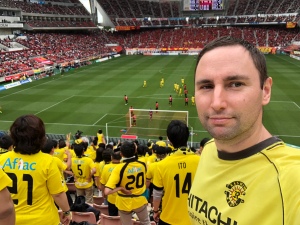 Grampus pulled one back from close range and the scorer was 38 year old Keiji Tamada who was a Reysol player back in 2004 when I first went to watch them. I even had his name on the back of my Japan shirt at that time but I had no idea before this match that he was still playing! 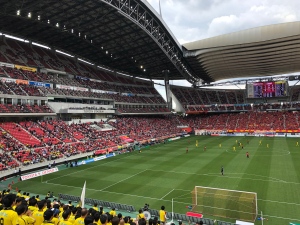 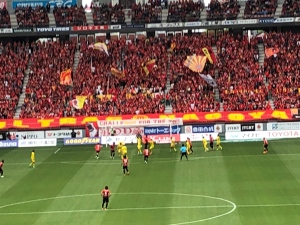 Reysol had a couple of good chances to make it 4-2 and put the game out of sight but it was never going to be that simple. Instead, Grampus piled on the pressure and in injury time they had the ball in the back of the net as Grampus striker Jo poked the ball past goalkeeper Kosuke Nakamura who then landed in quite sickening fashion. The stadium announcer was already screaming “goooooooo…. ” before realising the flag was up. The Reysol goalie was down for ages before the referee eventually just decided to blow for full time as the match finished in highly controversial circumstances. A lucky escape for Reysol as there really wasn’t anything wrong with the goal but in Japan such disputed incidences are rarely, if ever, shown on TV so it’s not included in the highlights video below!

There was time for a few more photos as I rushed back to the station at its conclusion and this time I was on the other side of the bridge as I crossed back over the river.

Manhole covers are uniquely Japanese sights and a nice way of making such a mundane thing a work of art. Japan is full of these distinctive designs and there are tens of thousands of them around the country. No surprise then that there are some Nagoya Grampus ones on the approach to the stadium but I didn’t notice them till my return. 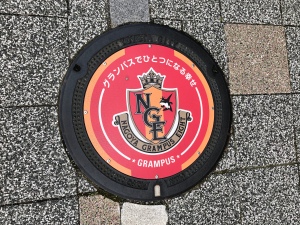 I left Shin Toyota Station at 4:30pm and finally arrived back at my in-laws house in Izu at 11pm so it was quite the epic journey but one that I’m very glad to have done.

BONUS: Here are some pictures from other Reysol games I’ve been to this season… 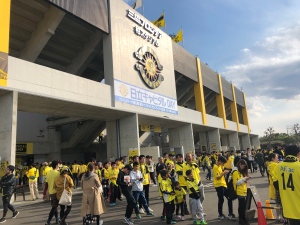 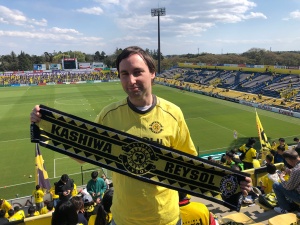 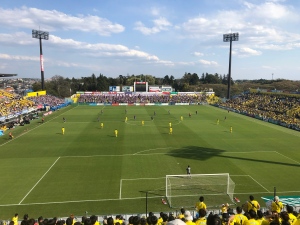 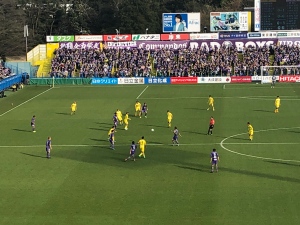 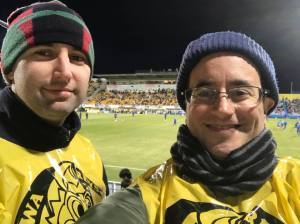 Click here to read ‘Away Day Travel To Ibaraki Prefecture’

5 Responses to Day Trip To The Toyota Stadium!