Hiroshima-ken 2015 Pt II: My First J-League Game For A While

It wasn’t just live baseball that I saw in Hiroshima-ken this Golden Week as I also took the opportunity to see the 2012 J-League champions Sanfrecce Hiroshima play against Vegalta Sendai at the 50,000 seater Edion Stadium last Saturday. 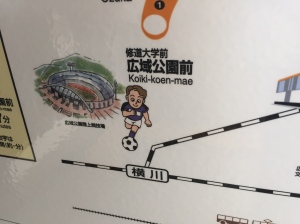 The weather was glorious as we joined the purple brigade on the journey to Koiki-koen-mae station at the end of the very expensive Astram Line (440 yen one way!). Saturday was also my wife’s birthday so what could be more romantic than taking her to see her first ever live football match!! 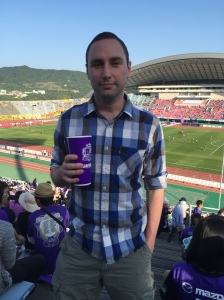 As for me, it was my first J-League game for 7.5 years (though in that time I have seen a friendly match involving Arsenal against Urawa Reds). Back in November 2007  I wrote on here about losing my appetite for J-League football but in the last year or so that has been rekindled due to my interaction on Twitter with some very passionate fans of the game in Japan. Furthermore, I have also contributed a few articles to the quarterly J-Soccer Magazine publication albeit stuff relating to the Samurai Blue national team rather than the J-League itself.

As for the action on the field, Sanfrecce were in control of the game really without ever having to step up a gear or two and Sendai look like a team who will be fighting for survival this year. Midfielder Gakuto Notsuda bent the first one in to the top corner from 20 yards on 38 minutes and then substitute Takuma Asano made it 2-0 towards the end with a great finish on a counter attack as Sendai pressed on in search of an equaliser. No sooner had that match been settled and my attention turned to more pressing matters; Leicester versus Newcastle in the Premier League relegation battle. 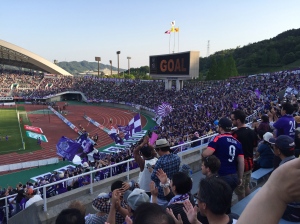 Anyone who read my previous post is probably disgusted with me for switching allegiance regarding my baseball team of choice but that is definitely not going to happen for the J-League. I was very glad to have the chance to see a Sanfrecce Hiroshima match at their home stadium but I am way more attached to Kashiwa Reysol than I was for the local baseball side.

In fact the Sanfrecce fans were singing Kashiwa throughout this game which was quite reassuring for me although it was actually for their player of the same name rather than my J-League team who I am now keen to see in action once again as soon as I get the chance.

19 Responses to Hiroshima-ken 2015 Pt II: My First J-League Game For A While