Hiroshima-ken 2015 Pt I: Live Baseball At The Mazda Stadium

For this years Golden Week holiday I’ve based myself in Hiroshima at my in-laws house and will be travelling around Hiroshima prefecture a bit. As I was in Hiroshima a day before my wife joined us I thought it would be nice to do something with my in-law’s so I suggested going to see some live sporting action.

My father-in-law is a passionate fan of the Carp (as indeed are most locals in Hiroshima) albeit an armchair fan so going to see the baseball gave him the opportunity to go to the Mazda Stadium for the first time which has been their home since 2009. Prior to that they played near the A-Bomb Dome at the now demolished Hiroshima Municipal Stadium which I actually saw on my first trip to Hiroshima in December 2005.

Despite being exposed to the game a fair bit through movies like ‘Mr Baseball‘ (1992) and ‘The Bad News Bears Go To Japan‘ (1978) as well as other offerings like ‘A League Of Their Own‘ (1992), ‘Hardball‘ (2001) and ‘Moneyball‘ (2011) I still had very little idea of the rules going into this clash between Hiroshima Carp and Yokohama Baystars. Thankfully, my mother-in-law was patient with me and my many questions as to what was actually happening and why!

Our seats were very good and it was a nice Summer’s night (in Spring!) with a great view and a beautiful backdrop with the Shinkansen regularly running by in the near distance of the stadium. On top of that there was the James Bond theme which was used fairly frequently as music throughout the night. 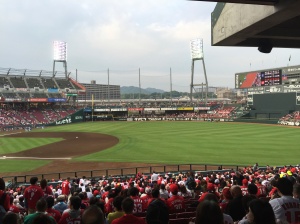 This was my first time to watch a baseball game since the Summer of 2006 when I went to see Chiba Lotte Marines at the Makuhari Stadium. On that occasion I was just accompanying a friend and my only concern was the beer! Albeit in different circumstances this occasion was also about drink and it proved to be a landmark day for me as I had my first alcohol for 113 days! 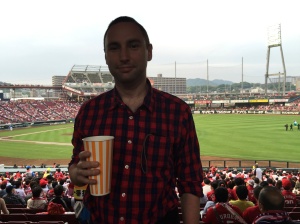 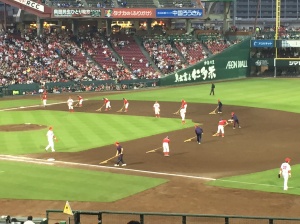 It seems that baseball is actually quite a simple game; pitchers throw the ball, batters hit it and then………..the Carp lose!! By all accounts the Carp have struggled in recent times not that the outcome mattered too much to me as I didn’t really understand the scoring system anyway! Maybe it was just this game but I think baseball movies have deceived me as they tend to include countess numbers of home-runs whereas in reality there was only one in this match courtesy of the Baystars!

It was nice to watch some sport in a more relaxed manner though compared to the nerve-wracking high tension Leicester City games in recent weeks! The atmosphere was good and it sounds like the Carp fans are some of the most passionate in Japanese baseball. While cheering, they alternate between standing and sitting in quick succession which has to be seen to be believed. 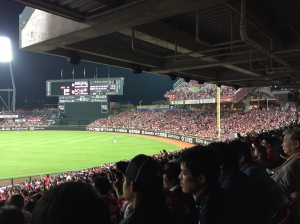 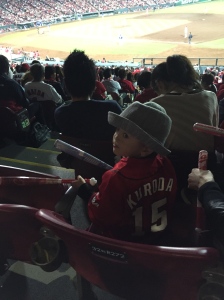 For the rest of the time in Hiroshima in the holiday season I was never too far from seeing some Carp merchandise in a wide variety of shops and stores in the area. 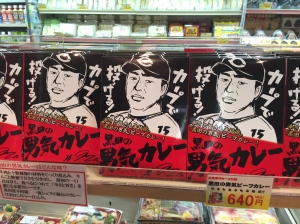 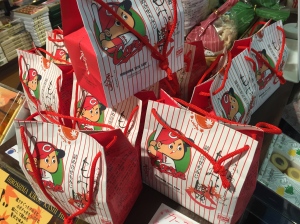 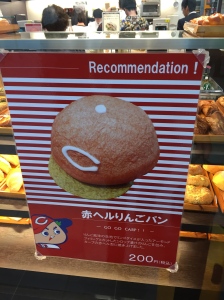 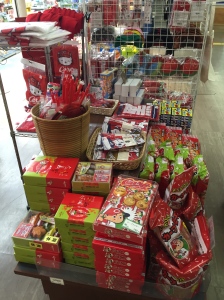 It seems that this team, which was founded in 1950, mean a great deal to the people in the area and I have even decided to switch allegiance from Chiba Lotte Marines to them which is a ridiculous idea and not something I ever like to see anyone do but why not?! I felt more of a connection and interest to this team (I can even name a few of their players unlike with the Marines!) and have continued to follow them a little bit as their losing streak continued…..up until yesterday when they had an amazing shock win against the Yomiuri Giants.

8 Responses to Hiroshima-ken 2015 Pt I: Live Baseball At The Mazda Stadium