The Lion, The Bridge & The Watergate – A Cycle Ride Up Into Saitama Prefecture 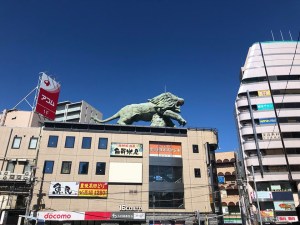 “What the hell was that?!” were my thoughts as the my train speeded its way up into Saitama last year as I went to watch Urawa Reds Ladies play a home game one Sunday. There was a giant statue of something that caught my eye very briefly before becoming lost amongst all the grey, concrete buildings. Earlier this year I noticed it again and made sure to make a note (using my maps) of where it was on my return journey.

It turned out that the statue was a giant lion located very closely to Kawaguchi Station in Saitama. A place within reasonably easy cycling distance too! To be fair, anywhere within 30-40 kilometres is sufficient but with my bike out of order I had to rely on my wife’s less cool two-wheeler to get some exercise!

Covid-19 was up and running at this point but the State of Emergency had not been declared in Japan at that time. It’s important to point that out as I know some people are all too ready to make a judgement! Route 122 crosses the bridge over the Arakawa River into Saitama Prefecture and that is the ONLY reference to the bridge mentioned in the title of this post which is a fairly lame parody of the C.S. Lewis novel ‘The Lion, The Witch and the Wardrobe‘ (great book, good TV series and an awful film!).

As I cycled past Kawaguchi Station I could see it in the near distance in all its glory. This is what I’d come to see. Yes, really! The giant roaring lion stands on the roof of the KIK building (3-2-1 Sakaecho, Kawaguchi, Saitama) which is full of izakaya bars just a short distance from the east exit of this station which is on the Keihin-Tōhoku Line. 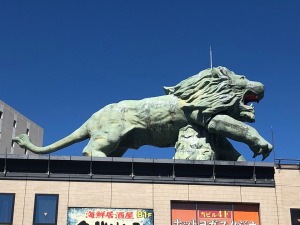 The maneki-neko is a Japanese ceramic or plastic figurine often seen in or at the entrance of shops, restaurants, pachinko parlours, and other such businesses with the idea that it’s believed to bring good luck to the owner. Some of them have a battery-powered slow-moving paw beckoning customers to enter the place. That right paw is always raised and is similarly the case with this much bigger, fiercer cat who is quite possibly trying to wave it’s mighty paw from the rooftop to get salarymen into it’s drinking establishments below. 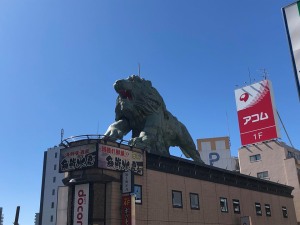 This lion statue was added in 1996 when the building was a pachinko parlour. The bright lights of pachinko were obviously not considered enough to entice people so the huge lion was added to make the building stick out and eventually become a symbol of Kawaguchi. It’s dimensions are 20 metres in width, 12 metres in height and it weighs about 1500 kilograms. 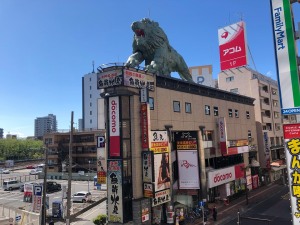 Once I had spent 5-10 minutes getting some pictures from different angles I hopped back on my bicycle and headed away from Saitama back to the Tokyo Fox Global Operations Centre in Itabashi. However, it was a nice day and the sun was out so I decided to investigate the watergate I could see in the distance. This is the kind of thing that I would probably not even have noticed a few years ago but that was before I had dedicated a whole post to such things! Click here to read ‘TF Top 5……Watergates Within Day Trips From Tokyo!’

The Old Iwabuchi Watergate is about 900 metres east of the bridge running along a very nice and pleasant footpath which is very popular with walkers, joggers and fishermen. It was constructed in 1924 at the confluence of the Arakawa and Sumida Rivers. 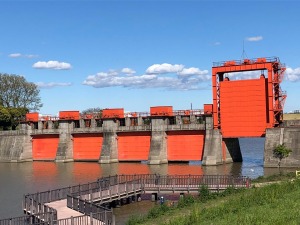 It contributed greatly to preventing floods until 1982 when a new sluice gate was completed. 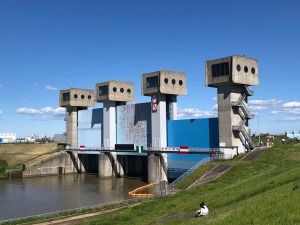 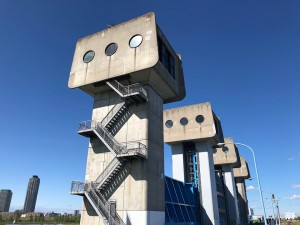 Initially, the red watergate was set to be demolished but local support and opposition forced reconsideration, and in 1999 it’s historical significance was officially verified by the Tokyo Metropolis. A less distinctive acclaim is that it’s actually believed to be one of Tokyo’s spookiest places which I was sadly unaware of when I cycled the capital city’s most haunted places in one day back in 2012. The gate was where the washed up bodies of people committing suicide at sea would end up. It’s also believed that the waters around the watergate attract ghosts. Limited street lighting around the area also helps to create an eerie atmosphere at nighttime.

Bonus: Masuii House (3-2-5 Nakaaoki) is just over a kilometre further on down the road from Kawaguchi Station. I didn’t go there on this particular occasion as I’m more than happy with these shots from about three years ago. The shape of this place is crazy but if you look closely you’ll see that there are a couple of support poles not that I’d still be too comfortable with them if I was at the end of that building! 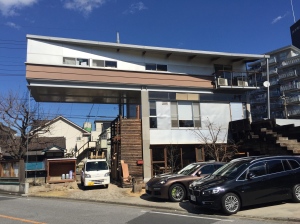 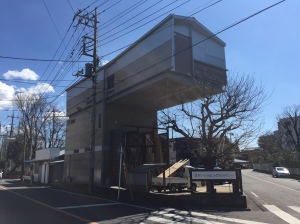 2 Responses to The Lion, The Bridge & The Watergate – A Cycle Ride Up Into Saitama Prefecture