The FIFA World Cup came to Asia twenty years ago when it kicked off on May 31st. This particular tournament is one that I’ve reminisced about a fair few times with regard to the effect it had on my decision to eventually move to Japan. Over the years I have waxed lyrical about this World Cup each time I’ve visited stadiums in the likes of Yokohama, Saitama, Shizuoka, Sendai, Kobe, Kashima and Sapporo as well as the Japan Football Museum in Tokyo.

That tournament wasn’t just in Japan though as it was co-hosted with Korea and I sometimes forget that. Fact is that the first stadium I visited from that World Cup was in South Korea as I dragged my friend Asif (a non-football fan!) there during our three night stay in Seoul back in January 2006 just before the Tokyo Fox website was born! 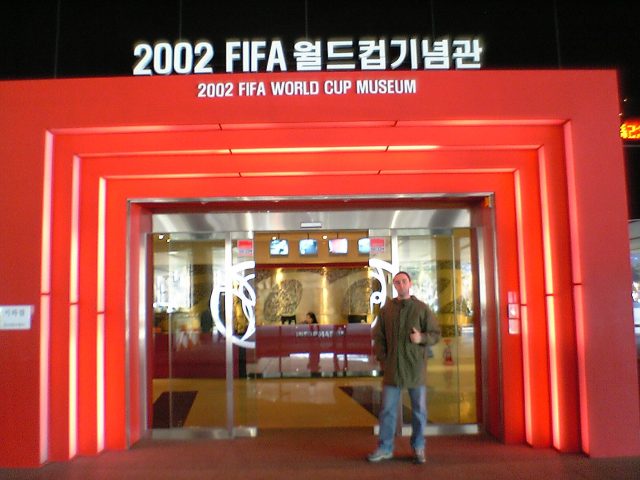 Who ever knew the doors would automatically open when I stood near them!!

Obviously it’s been a long time now since I visited this stadium so my memory is a little hazy of what we saw and did there. What I can remember is some exhibits on World Cup history, photographs and information about how South Korea have fared in such tournaments, balls, shirts, trophies and the usual paraphernalia one would expect to see in such a football-based museum. 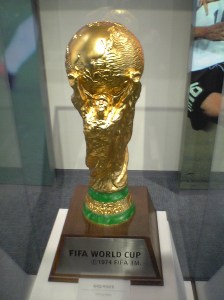 The chance to be integrated into the 2002 South Korean team was a very tacky photo opportunity that I couldn’t turn down. I loved watching them play though it has to be said that they really did ride their luck at times, particularly in their knock-out victories against Italy and Spain. Their 1-0 semi-final defeat against Germany was one of three matches hosted in this stadium with the other two being a group match between Turkey and China (3-0) and the opener where Senegal upset the holders France thanks to a goal from Papa Bouba Diop (God rest his soul).

Dutchman Guus Hiddink was the Coach of that 2002 team and there is a bust of him inside the museum along with a few other notable people including legendary player Cha Bum-Kun who I remembered from Mexico ’86 though that was probably more down to his name! 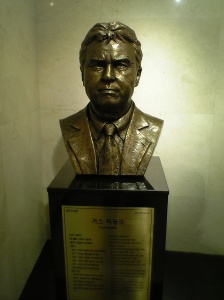 You may not be able to tell but the Korea/Japan ball below was a giant sized one. Given that I put myself in so many of my pictures at that time, maybe I should’ve done so for this picture for the sake of comparison!

The official mascots of the 2002 tournament were known as The Spheriks with Ato, Kaz, and Nik the individual names. These names were actually chosen by McDonalds customers before the competition commenced. As you can see below, there were statues of them both inside the museum and outside the stadium.

This 66,704-seater football-specific stadium (it has held music concerts too!) opened in November 2001 and is currently the second largest stadium in South Korea (after Seoul Olympic Stadium), and the largest rectangular stadium in Asia. Who ever knew that was a thing!!

I was expecting a guided tour of the stadium but instead we were just left to roam on our own and so headed on up into the stands to see the view that you’d get on a match day. It also gave us the best possible view (we didn’t have a helicopter to hand!) to see the stadium’s roof which proudly exhibits its Korean roots. It is shaped to look like a traditional Korean kite and protects 90% of the seats from the rain. 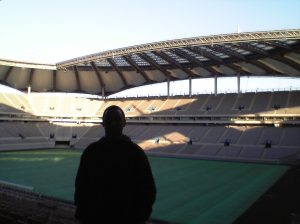 These were different times where I didn’t have a decent camera so all the photos in this post were taken via a disposable camera or on my flip-phone of the time. I know we went into the Media room and the home and away changing rooms but didn’t seem to take any pictures there! Our final port of call was to go pitchside via the players tunnel. 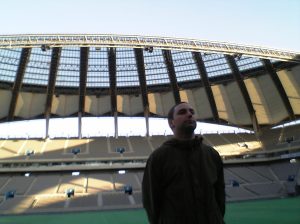 It was pretty cool to be able to stand in the same dug-out where Hiddink guided his players from. 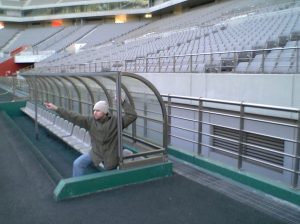 As much as I like stadium tours, it sure is no rival for seeing an actual live match there but sadly there was no FC Seoul (the K-League team who moved to the stadium in 2004) game whilst I was in town. Given my renewed interest in the J-League and Asian football in the last eight years or so I’m going to have to make sure my next trip to Korea coincides with a match.

Click here to read ‘TF Flashback: The Trip To Seoul In 2006 Which Really Kickstarted Many Years Of Asian Travel’