Dare I say it but I have actually quite enjoyed the recent international break following the fortunes of the like of England, Wales and Northern Ireland at the business end of European Championship qualification. It was also nice to see recent Leicester recruit Shinji Okazaki turn out for the Japan national team and he managed to get on the scoresheet a couple of times against Afghanistan.

However, the break from domestic football has brought about two weeks of almost non-stop heavy rain but thankfully the sun was finally out a couple of days ago (did it hold off all night though? Find out later!) as the J-League resumed live from Saitama with Friday Night Football featuring my Kashiwa Reysol boys from Chiba on the road at Urawa Reds.

Before kick off, Reysol and Reds were in 3rd and 9th place respectively but things are not as simple as they may look. That’s because this years J-League is a bit of a strange one with a two-stage system in place. The home side romped to victory in the first half of the season thereby guaranteeing them a place in the end of the season play off matches to decide who is champion.

Motivation seems to have been lacking in the second stage though which is why they are languishing in a mid-table position. It’s the opposite though for Reysol who really struggled during the first stage as their Asian Champions League exploits cost them heavily in the league but stage two has seen a dramatic turn in fortunes.

This was the fifth different stadium I’ve visited since May following trips to Edion Stadium, Ajinomoto Stadium, Hitachi Stadium and Sapporo Dome. I met up with Reds fanatic Yuji at Urawa Misono station and we walked to the stadium together as we did on my last visit when Arsenal played there in a friendly in July 2013. That time we sat together but this time I was intending to sit with the Reysol support.

However, I was unable to get a ticket in the away end so had to watch it among the enemy! Thankfully I had turned up at the game without my yellow top on and so could easily take it off and pretend that I was supporting the home team which is captained by former Leicester City defensive midfielder Yuki Abe.

The stadium was built for the 2002 World Cup (hence the name!) and was used four times in that tournament which was hosted jointly by Japan and Korea. Matches included England’s group opener against Sweden, Japan’s 2-2 draw with Belgium and the semi-final involving Brazil and Turkey. Leicester City legend Muzzy Izzet even appeared as a second half substitute for the latter in that game and some of the pillars in the stadium concourse display information and images from those games. 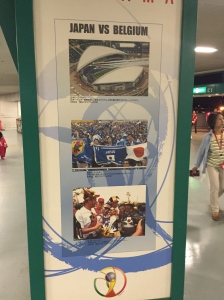 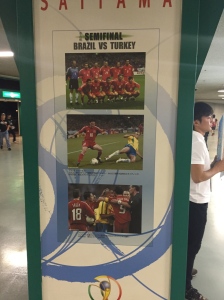 Within seconds of taking my seat next to the Reysol fans it started raining and so with no cover I thought I’d try and get a seat under one of the side stands. I actually ended up round the other side of the ground as my ticket only entitled me to sit at either end of the stadium. I found another seat but the rain was really starting to pour down so I took up a restricted view from the concourse tunnel and even watched the first ten minutes on a monitor with a few dozen other wimps!

After 10-15 minutes the rain had eased off and I joined the Reds faithful. The last time I saw these two sides face-off was in November 2004 when Reds ran riot and won 4-0. This time it was a much closer affair, though Reds did dominate possession with counter-attacks from Reysol being fairly restricted. 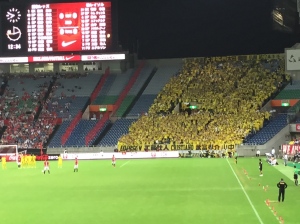 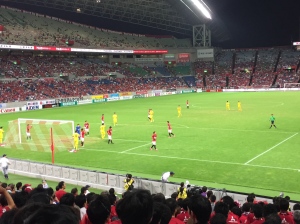 It really wasn’t the best of games and the second half was also mostly controlled by Reds possession but Kashiwa themselves came close to stealing it when striker Kudo hit the post with 16 minutes left following a defensive mix-up.

At the other end Reysol keeper Takanori Sugeno pulled off some fine saves as he did in the first period. Typical then that he was probably a little at fault for the 88th minute Reds winner from substitute Yoshiyuki Takagi which bounced awkwardly in front of him (hit a divot?) and went over his stretched-out body. My head was in my hands as all those around me went wild but to keep up the pretence I had to clap the goal and high-five a few excited fans. There wasn’t much time to play after that and I made a quick escape! 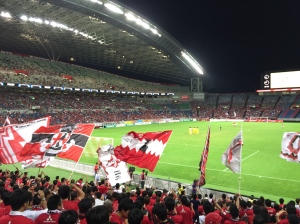 That’s three times this season that I have seen Kashiwa lose by a single goal and yet another time to experience a defeat right at the death when it looked as if we had managed to scrap for a hard earned point. I’m not (too) superstitious but it may be in the best interests of Reysol that I stay away for the rest of the season!