New Years Day usually signals the start of things but the Emperors Cup Final basically brings the curtain down on the previous years domestic Japanese football season. For the last few years, watching it on TV (or sleeping through it!) in the afternoon on January 1st has always managed to fit in nicely with my family’s plans once the traditional family stuff (sake for breakfast, shrine visit, osechi feast etc) has been done earlier.

However, this years semi-finals and final dates were rearranged not once but twice! It had long been decided that the final would move back to December 24th to accommodate the Asian Cup which kicks off early January in the UAE. However, things got a bit complicated when Kashima Antlers won the AFC Champions League final last month thus qualifying for the FIFA Club World Cup in mid-December, also taking place in the UAE. Antlers had already progressed to the semi-finals of the Emperors Cup a month before that so yet another schedule reshuffle was needed.

Both semi-finals (Urawa Reds vs Kashima Antlers and Vegalta Sendai vs Montedio Yamagata) were played just four days prior to the final which I think is actually normal for this competition. Not exactly much time to prepare for Urawa Reds and Vegalta Sendai who both progressed! My ears pricked up when I heard about the final being brought forward to Sunday 9th December as it meant I could go to my first final in Japan excluding the Blind Football World Grand Prix final I saw back in March!

My ticket was purchased before those semis had even been played, and it seemed very easy to get one (given that it is a cup final!) which is probably because fans of those teams waited till the outcome of the semis. There were a fair few seats empty around me so I probably could’ve just got one on the day anyway.

I’ve been to the Saitama Stadium 2002 a number of times now but this was the first time in just over three years when a last minute winner for the home side ruined my Friday Night in Urawa. This time I cycled from the Tokyo Fox Global Operations Centre to Akabane-iwabuchi metro station for exercise and to save a bit of money and time. Even though it’s only 19 minutes from there to Urawa-misono Station on the Saitama Rapid Railway line it still cost a ridiculous ¥470! 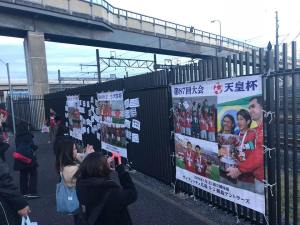 Between 1997 and 2000 I attended three English League Cup finals (four matches as the first one went to a replay) and they were always really special occasions with a carnival-like spirit amongst both sets of supporters but this one didn’t seem too different from a regular J-League game as I made my way down the Wembley Way-like path. That may have been because Urawa Reds were playing at their home ground so there wasn’t anything too different for their fans. 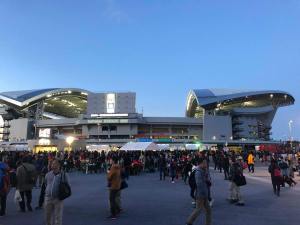 This stadium played host to the showpiece final with just over 50,000 people in attendance. It was built for the 2002 World Cup (hence the name!) and was used four times in that tournament hosted jointly by Japan and Korea. Matches included England’s group opener against Sweden, Japan’s 2-2 draw with Belgium, and the semi-final involving Brazil and Turkey. Leicester City legend Muzzy Izzet even appeared as a second half substitute for the latter in that game and some of the pillars in the stadium concourse display information and images from those games. 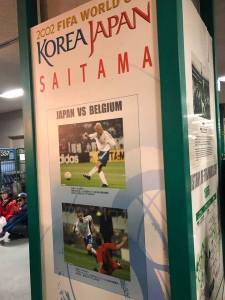 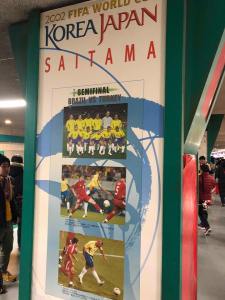 For the record, the Emperors Cup is the oldest football tournament in Japan, dating back to 1921, before the formation of any football leagues in Japan. It is the second oldest tournament in the world after the English FA Cup. Before WWII, teams could qualify not only from Japan proper but also from the likes of Korea and Taiwan. 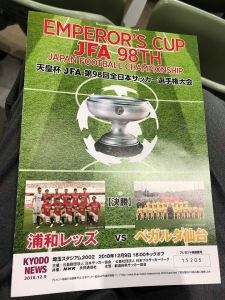 It’s been a very mild December so far (it was 23 degrees just five or six days before this match!) but it was a bitterly cold night in Saitama and even colder up in the stands where I was thankfully surrounded by mostly Vegalta fans. Alcohol helped me get in better spirit and I managed to drink three beers before kick off including two between the station and the stadium gate which is unlike me. Strange too as I drunk a lot the night before at a work Christmas party and can’t say I was in the mood for drinking so soon after.

The 6pm kick off on a Sunday night under the floodlights did seem a bit strange. It was a tight match though Vegalta didn’t really create anything and the Reds were a bit more organised in defence. They went one-nil up on 13 minutes thanks to an absolutely cracking volley from outside the box by Tomoya Ugajin. 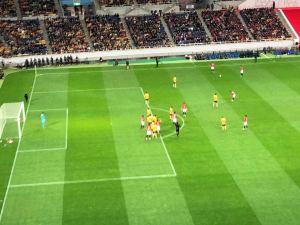 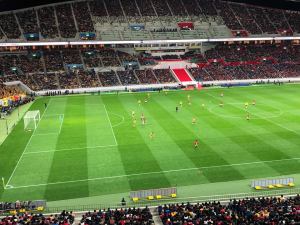 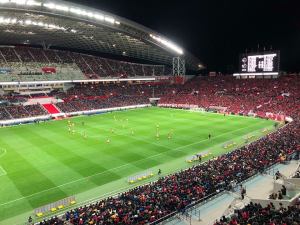 It was a goal worthy of winning the cup and ultimately it turned out that way in a final where neither goalkeeper was really tested too much. The final whistle blew after five minutes of injury time and many of the Vegalta fans around me headed for the exits. That’s understandable but they weren’t the only ones as many Reds fans departed long before their boys had lifted the trophy too!! This seems like madness to me as an 8pm finish is not that late or are they just so used to seeing their team lift cups that they don’t need to see the crowing glory! Eventually, after the presentation of so many trophies, the main cup was lifted and the ticker tape rained down on the jubilant and (as much as I hate to say it!) deserved victors.

Soooo many trophies given out post match! God knows what most of them are for! #EmperorsCup 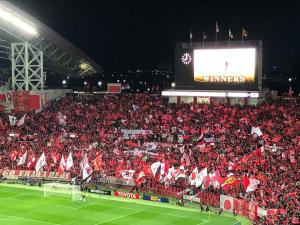 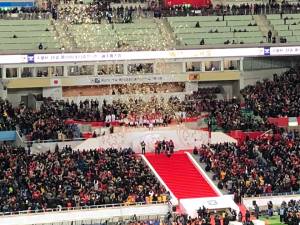 Click here to read ‘Grampus Eight Up My Appetite For Any More J-League Football!’ (2007)