Urine For A Real Treat Should You Need To Go To The Toilet At This Park Just Outside Of Tokyo!

Local train travel is very much how I like to travel when going around Japan but occasionally I actually do take the Shinkansen (bullet train) albeit usually only when travelling with my wife or time is of utmost importance. As much as I like the Shinkansen experience I just find the cost of using it so expensive. Price is definitely not an issue should you choose to board this one though!!

This is the 200 series Shinkansen for the Tohoku and Joetsu Shinkansen high-speed rail lines which was in existence until 2013. Exit this one though and you’re not in Niigata but are actually in Fukuoka Chuo Park (1-3-9 Uenodai, Fujimino-shi, Saitama). Journey up the Tobu Toju Line from Ikebukuro towards Kawagoe but alight a couple of stops early at Kami Fukuoka Station and there’s a spacious park about eight minutes away on foot.

Tokyo Fox is never afraid to plumb to new depths so deposited in the south-east corner of the park is a structure that will bowel you over! People of a sensitive nature had better not dare show their faeces around here for this Shinkansen is actually a block of toilets. I’m sure you’d worked that out by now though given the very wee-k toilet puns that have been dumped shamelessly into this paragraph! 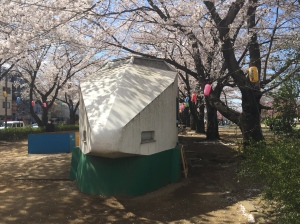 In these nervy Covid-19 times we need to get to the bottom of one thing and that is when these pictures were taken. I can ass-ure you that they were taken around four years ago so you could say that I’ve been sitting on this “story” for quite some time! I just needed to get it out of my cistern and now I guess I can finally put a lid on this matter! 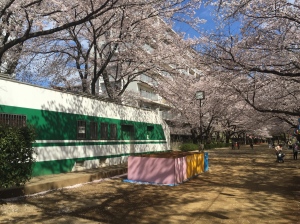 Train enthusiasts will be desperate to go……and see this ivory and green Shinkansen but be prepared to not get too bogged down by details as the signboard besides the toilets doesn’t even mention the Shinkansen but just states that an earthquake-resistant emergency water storage tank was installed in 1985 which is the same year that the Shinkansen 200 Series began operating between Ueno and Omiya; the nearest Shinkansen stop about 12 km eastwards. 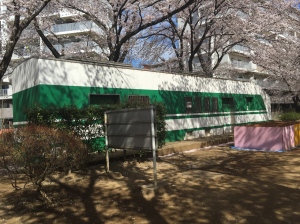 It is speculated that the regular public toilet was replaced by this ivory and green bullet train design as a memorial to the 200 Series that was first introduced in 1982. 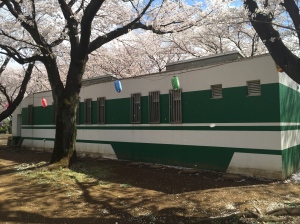 Last year I once again visited this park as part of a cycle ride to Kawagoe on a very hot Summer day in July. It was 34 degrees when I did that which was maybe not such a good idea. More of an excrement one if you prefer!

Bonus: Time to dip into the Tokyo Fox archives to find some other toilet-related stories and, as you can maybe guess, these lavatories are outside Oku Station (1 Shōwamachi, Kita-ku) on the Takasaki and Utsunomiya Lines. It featured in the ‘Tokyo Modern Architecture #4‘ post from November 2018 and is perhaps my favourite toilet block. Yes I really did just say that. There is actually an Instagram page dedicated to the architecture of toilets in Japan. Search for toilets_a_go_go if you’re interested!

Click here to read ‘The Temple Of The Toilet God’

2 Responses to Urine For A Real Treat Should You Need To Go To The Toilet At This Park Just Outside Of Tokyo!