On Thursday I went to Fuji-Q Highland which is in the foreground of Mount Fuji. Having had to sit apart from my old N*va mate Ethan on the bus (Asif arrived only a few minutes before our bus left and subsequently had to get the next bus) we arrived at the theme park at about 10am. The weather was scorching hot for most of the day which was not so good as you practically spend your whole day queueing up for the rides which then only last between 30 and 90 seconds.

However, the three main big blockbuster rides didn’t let us down. “Eejanaika” was a brand new ride which we had to wait three hours to go on and is in the record books as having the most upside-down spins in the world. You ascend this rollercoaster ride backwards at the start before plummeting at a drop of 89 degrees before falling into a spin followed by countless more spins which result in you not having any idea where you’re going. Fantastic stuff! 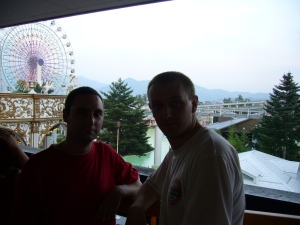 Having been to Fuji-Q over two years ago I knew about all the other rides but that obviously didn’t make them any easier to stomach, particularly “Fujiyama” (huge rollercoaster which used to have the worlds biggest drop – 79 metres!) and “Dodonpa” (another jet-coaster which shoots you out horizontally at the start at 172km per hour). That of course is the appeal to the many many people who go to these theme parks.