For the second year in a row I went to Summer Sonic music festival in Chiba where fortunately the predicted rain and thunder held off unlike on the previous day which i didn’t go to. I have commented on the differences between the Japanese and English crowds before (see May 29th entry for references to wearing towels around the neck, the strange location, no crowd surfing, no sitting on shoulders, cleanliness & patience between songs etc) so there was no culture shock for me this time as I knew what to expect. I gave the early bands a miss (the festival starts at 11am which is a couple of hours ahead of most festivals) as I only really wanted to see three bands. Beforehand I was a little worried that two of these might clash but luckily that was not the case.

I was on my own this year too (although I did meet up with one of my students for a bit during the day) which isn’t as bad as one may think as Summer Sonic is in the city and thus has no festival spirit and atmosphere meaning it is purely about the music. Lying around on the concrete floor in an exhibition centre doesn’t have quite the appeal of its grass counterpart though that didn’t stop many people! Being alone also meant that I didn’t have to worry about losing anyone when the crowd surged back and forth. However, I did meet up with a student of mine and her friend on the way to the festival but we all soon went our separate ways as we wanted to see different bands. 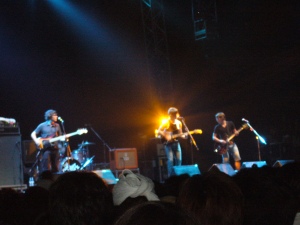 The main stage was at the baseball stadium which I went to a couple of months ago but I started at the other stages indoors at Makuhari Messe. I actually thought I was watching ‘We Are Scientists‘ for my first act but I realised afterwards that I was at a different stage and had actually been watching another band! After that I saw ‘The Kooks‘ and latest British musical press darlings ‘Arctic Monkeys‘ where the crowd did surprise me actually as they went absolutely bananas for them and I inevitably got stood on many times as I battled for survival. 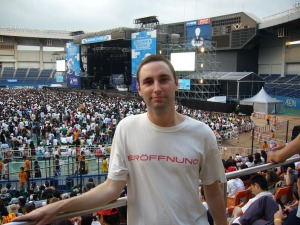 As the evening came I moved outdoors (no chance of topping up my sunburn while I was inside) and walked over the main highway to the stadiums Main stage. ‘Muse‘ were a band I’ve wanted to see live for a while as I heard great things about their live set and I wasn’t disappointed as they put in a rocking performance full of energy with the music doing the talking…. quite literally as the frontman never once addressed the audience but instead the drummer did which is a little bit different from the norm. 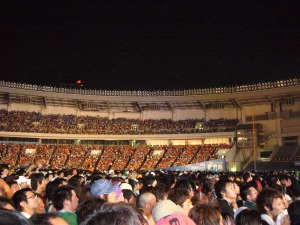 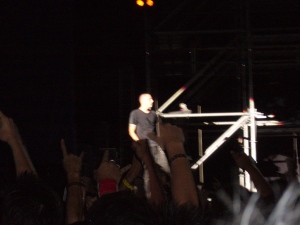 Headliners ‘Linkin Park‘ were next up and I only just averted disaster as they entered the fray as someone trod on my trainer which came off and I only just managed to slide my foot into it and drag it back where moments later I could finally put it on properly to great relief. That was a problem I could have done without as I was sweating buckets as it was anyway. All a far cry from the Glastonbury festivals which I have slummed my way through from the, erm comfort of my living room!