Miho No Matsubara – One Of The Best Views Of Mount Fuji

One can never really get tired of seeing this beautiful, solitary, snow-capped symmetrical cone, and there are many great places to view it from. Lake Kawaguchiko, Hakone, Fuji Q Highland and Fuji Shibazakura Matsuri are among the best places in the country to admire what has long been the inspiration for many artists, poets and photographers. Oh and bloggers too!

Admittedly, I had never heard of Miho No Matsubara until a day or two before our trip to Shizuoka city but I soon realised this could potentially be a great viewing point to add to the aforementioned places. It was my priority on our trip but we had to be patient as the weather looked far more promising on our second day. A bus is needed to get to Miho No Matsubara and Shimizu station is the best place to catch one from. Having only been in Shimizu seven months ago to watch Shimizu S-Pulse in J-League action I really didn’t expect to be back in the area so soon after.

We took a bus from the other side of the station to where the football one goes from about half an hour later were at our destination. A wooden boardwalk known as Kami no Michi (God’s Road) leads you to the beach and in some ways it wasn’t that dissimilar to the world’s longest wooden pedestrian bridge which I’d walked across only a few hours earlier. It was just a lot closer to the ground and was a very pleasant walk to whet your appetite for what is to come and I had no idea what to expect really once we’d made it through the pine groves and on to the beach. 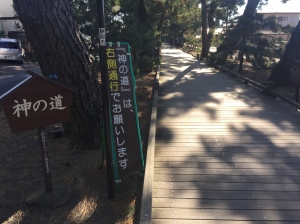 The spiritual mountain is still hidden away as you first step on to the volcanic black sand beach but moments later, Fuji-San starts to protrude from behind the pine forest.

The green forest, black sand, white waves, blue ocean and sky all combine with the iconic mountain for an awesome sight and it’s very easy to see it’s appeal. Miho-no-Matsubara’s beach spans over seven kilometres and there are over thirty-thousand pine trees growing on the seashore. 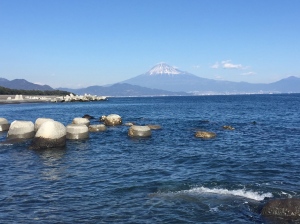 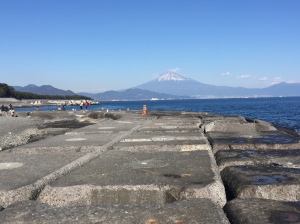 After about an hour we were ready to leave but were so hungry that we couldn’t wait until we’d got back to the station. Fortunately, there were a few makeshift restaurants nearby and so we had some noodles (soba for her and ramen for me if you must know!) which were very reasonably priced for such a tourist place.

There are a couple of shrines in the vicinity. The first picture below is right on the beach just where you first step on to the sand. The other one is known as the Miho Shrine and is located just over the road from where the aforementioned God’s Road wooden boardwalk begins. It is a very popular power spot for those who believe in such things! 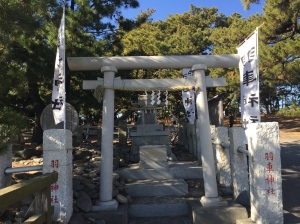 How to get there: Take a bus from bus stop #3 and disembark at Miho No Matsubara Iriguchi. Follow the crowds!! Or get off the bus and head back about ten metres to cross the road and continue walking in the direction which you cross the road at. Follow that road until you see a sign at the bottom of the road and then it’s easy as its all signposted!

On the way back to Izu we stopped at Yoshiwara station to see Bishamonten Myoho-ji Temple (2-7-1 Imai, Fuji, Shizuoka) which was a 10 minute walk away. There were some good views of Mount Fuji from the temple which features intricately carved details of dragons showing the Chinese influence, older Japanese architecture and Nepalese-style buildings. Quite the mix! I was admittedly a bit disappointed by this place (below) but as we didn’t really go too much out of our way, nothing was really lost. 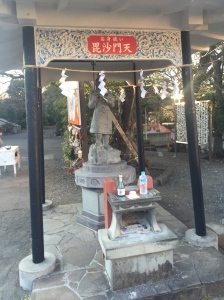