I have recently talked a few times about the changing colours of maple leaves and the Japanese fascination with it. Not something I ever took any notice of back in England but I guess I took that kind of thing for granted whereas in this metropolis green spaces are very few and far between.

However, I believe the best thing about this season in Japan is not this change but the one concerning Japanese girls changing from summer sandals to boots. Come the 1st of September a few pairs appear and by the time we enter mid-October they are being worn by almost the entire female population. While the strappy summer sandal things worn can only really enhance the more cute and young girls these sexy calf-length specimens can make the more average girls more appealing. 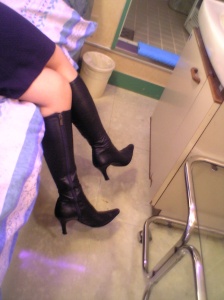 These creations come in a range of styles, colours and sizes and are widespread through nearly all ages of Japanese girls. Elsewhere, girls who wear these boots may occasionally be thought of, perhaps unfairly, by some people as being ‘easy’ or whatever but I don’t think people here are even aware of such negative connections as they just wear them to be cute, warm, fashionable and because everyone wears them. Whatever the reason it doesn’t really matter in my eyes just as long as the tradition continues!!

3 Responses to “Everybody’s Going For Those Kinky Boots, Kinky Boots”