A whirlwind tour of the south followed on the day after I arrived back in Ho Chi Minh from Cambodia. Having been with mates all the way it was a little strange to get back to being alone again as I set off on the 3rd of January to reach the beach resort of Mui Ne at lunchtime which was four hours away. No point in wasting time reading about places to stay in Vietnam as they always find you and so not wanting to dilly-dally I went with the first tout and splashed out an extravagant $7 for my beach hut before almost instantly taking a moto-tour of the place. This began with fairy spring which was a stream that one could walk through while viewing the interesting rock formations amid the sand dunes. 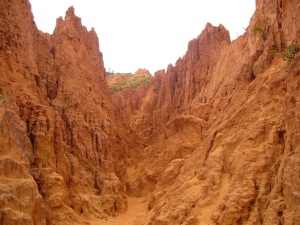 After a quick stop at the fishing village we continued on to the Red Sand Canyon to explore some more geological wonders and after that was the white sand dunes where I slid down the sand dunes on a plastic sled four times. I would have been happy to do it just the once but there are literally hundreds of kids at these dunes waiting with their sleds to rent out to us tourists for whatever we decide to pay them. It was ok but not anywhere near as exhilarating as doing the same as on snow! Sadly my digital camera also broke here as too much sand entered the lens preventing it from functioning which was annoying but with only a few days left it certainly wasn’t the worst time for such a thing to happen.

Nha Trang was my next port of call the following day where I checked into a $4 room with hot water and satelite TV which was very nice. I never got to really experience the true beauty here though as the weather was cloudy, rainy and windy. I did add another Daibutsu to my list though (this time a white one) and took a mineral-rich mud bath at Thap Ba Hot Spring Center which is supposed to rejuvenate your skin and reduce stress and whatever else. 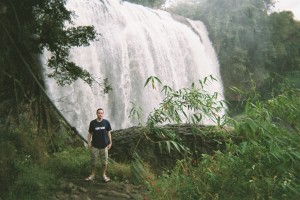 Dalat was my final stop on Saturday the 6th which I arrived in mid afternoon after a very very winding crawl by bus up through the mountains. This hill-station retreat was far cooler than i ever expected and so I was looking even more out of place as an ‘easy-rider’ scooted me round some rural village sites in my shorts and t-shirt while he was in a jumper and thick jacket! Was ok at first but by the time of sunset it was bloody cold. By Sunday evening I was back in HCMC having clocked up three places in five days and having spent about 24 hours on the buses in total.