Sad to say it for an area so beautiful but my interest in the islands of El Nido and its snorkelling had started to wane and I fancied seeing a new part of Palawan so at 7am I joined Donald, Evelyn and Nichola on a boat from El Nido down to Sabang which was more preferable than taking the bus or a jeepney though when we encountered heavy rainfall mid-journey I maybe thought differently!

On arrival we checked into ‘Dab Dab’ and its lovely designer cottages before taking a quick mangrove tour where we also suffered another sizable downpour. After that we took a boat to the Puerto Princesa Subterranean River National Park which was the reason why we went to Sabang. It was something I had wanted to do but didn’t think it would be possible as i was thinking I’d be spending three whole days in El Nido.

The Subterranean River is the worlds longest navigable river of which tourists can travel along a quarter of its 8km length seeing and listening to loads of bats flying around the cave. It was really nice and is what Lonely Planet refers to as being like you’re in the Jules Verne novel “Journey to the Center of the Earth”. Along the way our guide pointed the resemblance between the many many rock formations and Holy figures, women, vegetables and so on. 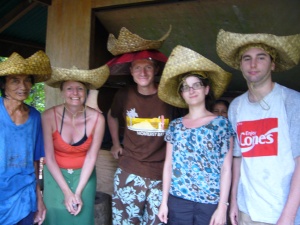 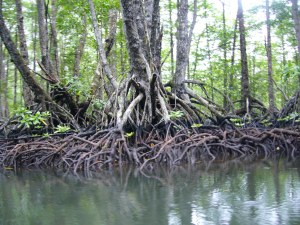 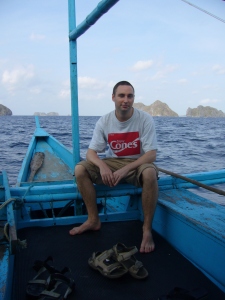 Thanks to our driver giving them some bait wild monkeys suddenly appeared on cue when we had finished the river cruise. There was also a spotting of an alligator. Not a bad afternoons work given our time restrictions.

Night-time brought about yet another fine example of local hospitality when a couple of us were invited to sing karaoke and drink beer in one of their homes with their family and a few other hangers on. Unfortunately my throat was in pain from the previous two nights drinking and furthermore the choice of songs was fairly poor as the Filipinos seem obsessed with the kind of love songs that I despise. All in all though it was a good night.