Yes I know I’m stringing this Philippines stuff out and milking it for all its worth but this is the final chapter………probably! After only a few hours sleep Donald, Evelyn (aka ‘the Belgians’), Nichola and myself took an adventurous three hour jeepney ride (about one pound sixty) along the bumpy roads back to Puerto Princesa which is the main city on the island of Palawan. This ride was an experience in itself as the journey is only about two hours but it takes 50% longer due to the constant p*ssing about in terms of stopping for locals to jump on and off or load and unload all number of materials such as timber or fish!

Following a fairly sudden parting of ways with my travel companions I was left to my own devices once again. I had the whole afternoon to see what I could of Palawan’s capital so hired a tricycle and my driver Bo (not just your average driver but also a man in the running for Councilor) first took me 16km south to the worlds largest free penal colony in Iwahig. It was a nice area but most of the prisoners were on lunch (or had they escaped?!) though I did get to meet one who rushed over to sell a t-shirt to me when I got out to take a photo. 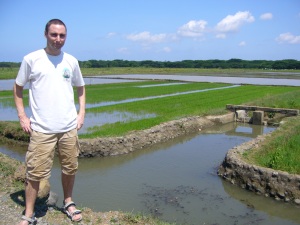 We also took a very bumpy road to a beautiful river which was full with bathers enjoying the crystal clear water but stupidly I had forgotten to pack my swimming shorts despite putting my towel in. After that we stopped off at Palawan Wildlife Rescue and Conservation Centre in Irawan where I got to hold a baby Crocodile called “Francesca” and our little tour ended with a quick visit to Honda Bay which was nothing too special having seen the beauty of El Nido. I did get to see a fairly big group of workers going about their fishing business which was quite interesting and that was more-or-less the end of my holiday. 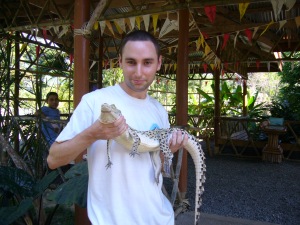 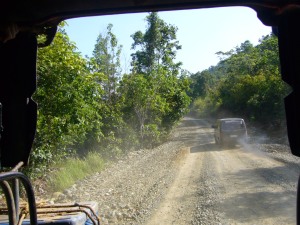 Overall, it was a great trip where I managed to do and experience more than I could probably have hoped for amid a cast of hundreds of happy and smiling locals in such a beautiful part of the Philippines. As mentioned back in Part I, I sampled a country of kind friendly people, lovely turquoise-green water, amazing islands, cute kids, mostly great weather, beautiful women, good snorkelling and lots of adventure. I was lucky to hang out with some nice fellow travellers particularly Donald who was an interesting funny guy and it was good to have eye contact with people which rarely happens in Tokyo and the fact that there was never any hassle from sellers and beggars was pleasant too.