Having packed our bags the nights before (easy for light traveller Hugo who only brought what he was wearing and a few changes of underwear!) we had to get up at 5.30am to get to the bus station in time for our jourmey out of Hungary and into Slovakia an hour later. It was the coldest bus ever and I slept for a short while before waking up wondering which country we were in. Still Hungary!

As we later drove straight through some run-down place with broken windows posing as passport control. I thought there might be some short procedure with a passport check but that was definitely not the case. We just hopped on a random tram where luckily some stranger pointed us in the right direction where we eventually checked into Hostel Vegas which was run by a young Slovak guy who had lived in Brixton and had certainly picked the English sarcasm and sense of humour.

We headed straight out for Bratislava Castle which was, as often seems to be the case with tourist attractions, a little under-reconstruction and nothing too special to be honest but the city itself was a lovely little place to just wander around. We later walked on up to some tall statue on a hill overlooking the whole of Bratislava which gave the typical panoramic view of the city and beyond. 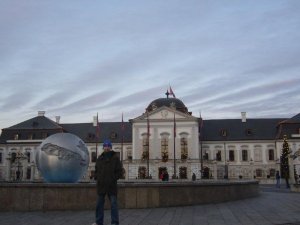 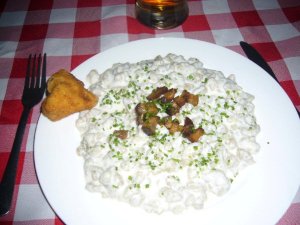 On a much lighter note the snow on the parked cars seemingly gave the excuse for some people to draw phallic symbols on the windscreen or bonnet and there were a fair number of these throughout the city. Needless to say that we joined in with this “craze”.

Our room-mate was from Indonesia and spoke German and only a tiny bit of English so I ended up speaking by far the most German since I lived and worked in Hamburg in 2003. This guy came out with us for dinner at the Slovak pub where I had bryndza sheeps cheese as part of a pasta dish with pork which was very nice.

A Leicester City fan teaching English in Japan
View all posts by tokyofox →
This entry was posted in Euro Travel and tagged Bratislava. Bookmark the permalink.