Given that I don’t take much notice of the local media my news about Japan still comes from external sources and quite often the things that I hear about Tokyo are completely new to me. The international media tends to only focus on the weird and (not-so) wonderful things to come out of Japan which usually revolves around very silly Japanese TV game shows (which I never see) or fairly useless innovations.

One such example was ‘F-Cup Cookie’ (read by some as f*ck up cookie, I kid you not!) which were heavily talked about on Scott Mills’ excellent BBC Radio One show back in December 2007. These are special cookies which are supposed to enhance womens breasts which, given the fact that the Japanese (if I can generalise for a moment!) are not so well endowed in that department, you would have thought would maybe be popular among the millions of overly-fashion conscious Tokyo girls.

Typically, I never saw such products on sale anywhere until finally I came across them the other day in one of the chain drug stores. About 750 yen for a box of 14 and by taking two a day a girls bust size supposedly increases which is exactly what Scott Mills put to the test which can be seen here in this video.

Being the romantic that I am I gave them to my girlfriend for her birthday the other week. In my defence, I should say that she did know about them beforehand and knew that it was a joke and that I was not implying anything by giving them to her. Furthermore, I would also like to add that I bought her a silver necklace, flowers, card and a t-shirt and made her a photo frame. I also took her out on both the Saturday and Sunday night so hopefully she will remember all that rather than the aforementioned cookie. 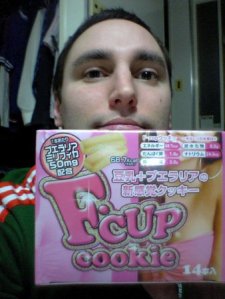