Bored Of Snowboarding In Hakuba?

Having had flu for over a week before my trip I was very apprehensive about myself and Ethan’s yearly trip to Hakuba and it’s fair to say that it wasn’t the most succesful trip but not due to any argument between us. We got on fine as always but I somehow lost my ski-lift pass after the first day and had to fork out 5000 yen for a new one day pass which I wasn’t happy about as we were trying to cut costs this year by staying at a cheaper hotel down the road from the resort rather than staying on site like we did last year and the year before.

On top of that weather conditions were fairly sh*te on the Friday after a very promising start. It was great for the first hour between eight and nine with nice powdery snow but went downhill after that. It then became very rainy, cold and windy resulting in the main gondola being closed which meant the courses we could use were very limited which resulted in us calling it a day slightly earlier than usual at 3pm.

Back at the hotel the two of us then shared a hot bath which is such a Japanese tradition and not a homosexual free-for-all. These baths may be immensely popular with the locals but we lasted only a few minutes before giving up.

After a short nap (much needed after very little sleep on the overnight bus journey) we decided to forego dinner (probably a good idea given the tiny meal we were served up for breakfast the following morning) and went into town as Ethan was desparate to return to the Mexican restaurant we visited last year but certainly not to try the aptly named ‘death’ sauce again! After a not-so-amazing meal we then had to run through the sludgy streets to catch the last bus back to our hotel as one bus didn’t stop for us outside the restaurant as we had expected it would.

The Saturday morning was also frustrating as the gondola didn’t open for a while and when it did it always had long queues. Also, the second mountain link was closed until the early afternoon for no justifiable reasons it seemed as the weather conditions were very good. To be honest, the trip was not such a disaster but we might have to think again when it comes to choosing our next snowboarding destination. 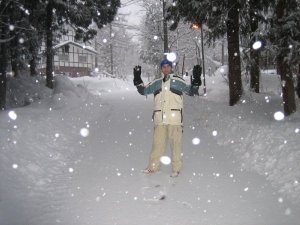 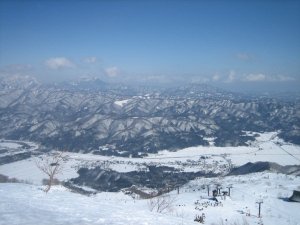 A Leicester City fan teaching English in Japan
View all posts by tokyofox →
This entry was posted in Action & Adventure, Japan Travel and tagged hakuba, nagano, snowboarding. Bookmark the permalink.

2 Responses to Bored Of Snowboarding In Hakuba?