As a fan of the whole Terminator franchise I just had to go to Odaiba and see the “Terminator Exhibition: Battle or Coexistence? Robots and Our Future” which is not exactly the most snappy of titles is it?! Most museums may be free back in the UK but not here in Tokyo where myself and Ethan had to cough up 1200 yen each to enter the National Museum of Emerging Science and Innovation.

Japan is of course famed for its development of pet and cleaning robots and this exhibition was based on the possibility of robots and humans co-existing (whether killing or protecting!) as portrayed by the Terminator series. Having read this blurb I wasn’t expecting too much in the way of Terminator-related things and I was half right but there was actually more than I imagined. Of course the whole thing was basically just a big promotion for next month’s new film and there was a mini-cinema zone playing the trailers.

One other zone featured the costumes and robots from the next film including the more black degraded robots (rather than shiny and silver) and the Mototerminator which as the name suggests is a cross between a motorbike and a terminator. The main zone featured exhibits, costumes, artwork and photos from all the movies as well as a model of Cameron (played by the gorgeous Summer Glau) who plays the terminator protecting John Connor in ‘Terminator: The Sarah Connor Chronicles‘ TV series. 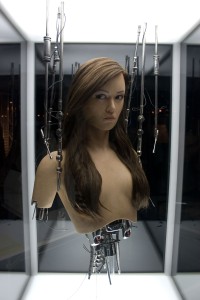 I was told off three times for use of flash photography but given that they don’t eject you for such a thing I just had to make sure that it was a different staff member who spoke to me each time and as always in this country there were loads of workers present.

Luckily we could sell our tickets outside to a mate and his friend at half price which made the exhibition more satisfying. It also did its job of whetting our appetite for the forthcoming ‘Terminator Salvation‘ (known as ‘Terminator 4‘ in Japan) film which is released in Japan on June 13th. 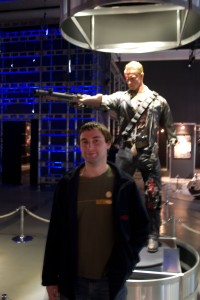 You can read my review of ‘Terminator Salvation‘ here

2 Responses to Terminator Exhibition In Tokyo