Another 5am start for my final full day in Tunisia. I was at the louage station by 5.45am waiting for the shared taxi to fill-up. Unfortunately I had to wait 90minutes for it to be full which is not that bad I guess but when yoh haven’t got so much time on your side its not so great. I was still in El Jem by 8am though and visited the amphitheatre there which was really nice and fairly empty when I got there though that didn’t last long as a load of German tour buses soon arrived thereafter. 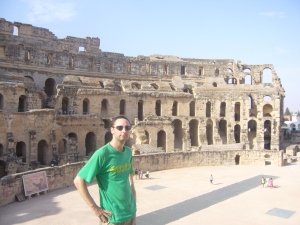 A louage back to Sousse followed by a fairly instant louage down to Monastir followed. I visited the Ribat in Monastir which featured in ‘Monty Python’s Life Of Brian‘ and the (fairly) unique thing about this place is that its right on the beach with the tower offering great views of the beach which I went to after for a quick swim. The sea was so refreshing given the temperature and for me, it was interesting to see Muslims in such a non-religious situation and believe it or not quite a relief to be free of the Star Wars sites which had dominated the trip up until then. Indeed, it would be quite nice to return to the country one day for a ‘normal’ holiday. 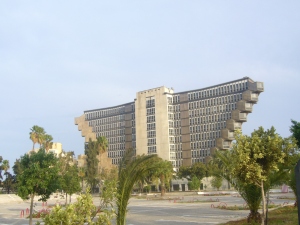 Once back in Sousse I later took another louage back to the capital city Tunis which I hadn’t spent any time in on my arrival into the country. The reason for the early starts to all of these days is because the louage situation can get quiet later in the afternoons so one doesn’t want to be waiting around for ages for the car to reach capacity.

Having often been the only guest at my hotels in the south I hadn’t really anticipated the budget hotels being full but the first three I tried were. Eventually I ended up at the ironically named Hotel de la Tranquillite which was under three pounds for the night and was a basic prison cell sweatbox. Still, it did its job providing somewhere for me to lie down at the end of the day and that was basically the end of my first trip to the African continent and it was quite an eye-opener for me in terms of not being able to use hardly any English for the first time in my life. My French skills are fairly basic so I can’t imagine how difficult it would be for someone who doesn’t speak any French at all.

I may have ticked most boxes while I was there due to some excessive travelling but there was just that something lacking which was not having much in the way of conversation, sharing experiences and so on with other travellers.

I had a quick look around Tunis but was too late to visit any of the major attractions in the area but what I did see was the Grand Hotel du Lac ad its strange shape which was maybe an inspiration (or inspired by) for the sandcrawlers in Star Wars.