I made what has become my bi-yearly pilgrammage to Kawasaki Daishi on Sunday 4th April to witness the Kanamara Matsuri more commonly known as the P*nis Festival. This was my third visit to the festival and maybe my last one as I think the novelty of seeing the stone, black and pink portable p*nis shrines has worn off. My friend Gideon was with me this time but despite being in Japan for nearly 15 years he’d unbelievably never been to this cultural highlight! 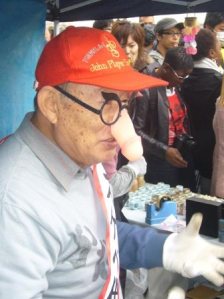 The festival seemingly attracts more attention from the overseas media who tend to focus only on the weird things in Japan. As for me, I was just there to raise money and awareness for AIDS research and to celebrate fertility or whatever!

Compared to my last visit two years ago it was pretty much the same in terms of the main theme of the penis which could be seen everywhere in terms of candy, carved vegetables, illustrations and other souvenir goods.

I actually saw a bit more of the parade this year which saw the portable shrines carried by dozens of Japanese people through the streets of Kawasaki not that it was that interesting really. In some ways the festival was more enjoyable and certainly more relaxing once the parade disappeared from the shrine grounds as there was more space, the beer flowed and some performances of traditional Japanese music which added to the atmosphere. Sadly the weather wasn’t the same though as this year it was a bitterly cold and cloudy day which didn’t bode to well for the hanami party which I attended afterwards in Kichijoji.

Not to much to add to my previous blogs on this festival in 2006 and 2008 but I will say that there is something very wrong about seeing young kids sucking on phallic-shaped lollies or being placed on the big long wooden penis while their parents (along with a crowd of others) click away. 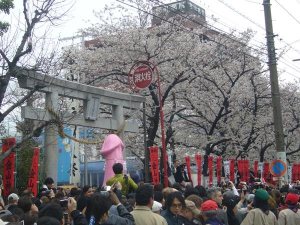