Having finally found the place I willingly gave up just 300 yen (about two pounds fifty) to enter Hyakuana which translates as 100 holes. A good name and that’s all it is as there are actually more than double that amount! This Saitama-based location is not in any guide books and I only found out about it while looking at “haikyo” (abandoned ruins) websites. For that reason and the fact that it wasn’t a weekend meant I was the only visitor there to start with (a few couples arrived sporadically later on). My first port of call was the tunnels which were made bigger during WWII to protect the Japanese from the Allied bombing raids. According to this fascinating military museums website they were enlarged in 1945 through the efforts of 3,500 Korean forced labourers. 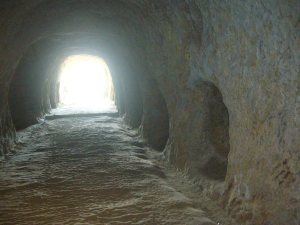 Most students have asked me if I was scared to which I say no and thats not just me being all macho. Its just that I often went cycling along an old train track to some tunnels in my hometown when I was a teenager. Those tunnels were completely dark but the ones in Yoshimi were very well lit and were used as storage for weapons in WWII. Only 10% of the tunnels are actually open to visitors with portcullis’ blocking the end of each path.

After I exited the tunnels I explored the caves which are actually over 1300 years old with differing opinions on their history whether it be be aboriginal homes from the end of the 19th century or a WWII ammunition factory. Specially constructed staircases lead tourists to a fair few caves which as the photos show are tiny and inside there is nothing but a bit of graffiti (artefacts recovered in 1888 are on display in a small on-site museum) and barely enough room to stand up or lie down. 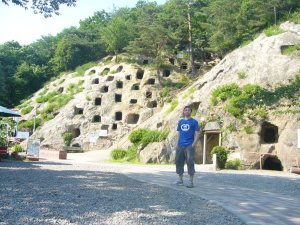 Before heading home I went into one of the souvenir shops which featured some very interesting photos on the wall. I didn’t know whether they were for sale or just on show so with that in mind I was not so sure about taking photos of the pictures. There was one showing the tombs appearance before they became a tourist attraction and a couple featuring local people and soldiers standing in front of the tombs which kind of reminded me of the (far more picturesque) Ksours which I visited at Ksar Ouled Soltane in Tunisia last August. 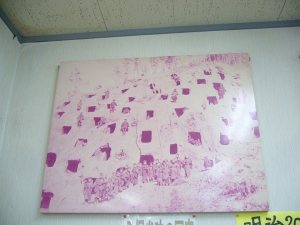