Cycling Kanda River In One Day

You can read ‘Cycling Kanda River In One Day’ – Prelude’ here.

Within a few seconds of cycling alongside the river I stop at Yanagibashi which, according to the article that this ride was based on, was a red light district 200 years ago. Not so exciting now with it just being a kind of car park but for charter boats.

Not much further on is Hijiribashi which is an 88 year old arched stone bridge. 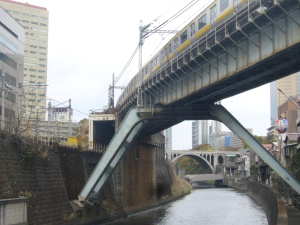 I continue on through Akihabara but its too early to see any maids about. I take a quick detour to the see Tokyo Dome (photo opportunity for a different project) and though I’ve seen very few cherry blossoms (sakura) so far I decide to be patient and miss Koishikawa Korakuen gardens as I’ve been there before and don’t really wanna spend money on the entrance fee or stop when I’ve only just got going. Unbeknown to myself I take a wrong turn at Iidabashi and end up following the wrong river down to the fish farms of Sendagaya. I turn back and am slightly frustrated despite seeing some beautiful sakura. 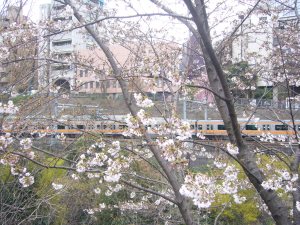 Picturesque scenery dominates my ride along the riverbank around Edogawabashi and it isn’t until I reach Takadanobaba that I actually have my bearings. I lose them pretty much straightaway after crossing Tokyo’s only tram line (Toden Arakawa line) as I am unable to follow the river and can’t cycle parallel to the river. From here on there are lots of gates to go through and I can’t go more than 50 metres without having to slow down and go through one before waiting to cross the roads and the process repeats over and over again. 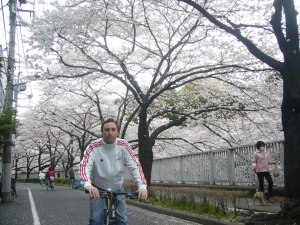 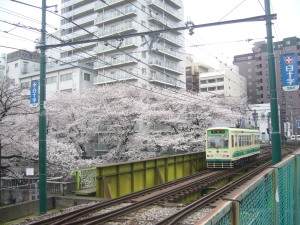 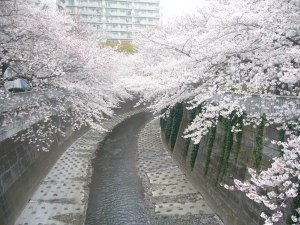 Every photo opportunity (and there are many!) seems the same (a bending river with overhanging sakura) as I race to make it to my destination by lunchtime. Up river I am faced with a decision as the river splits into two and I am thankful that I recognise the kanji for Kanda River and take the left fork where that sign is placed. On my return journey I discover that it wasn’t such a crucial decision as they both eventually lead to the same place! 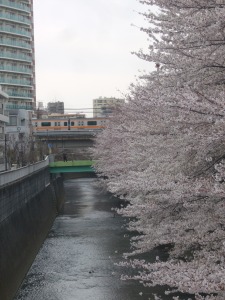 Nakano-ku is hell. A long and dull urban sprawl which seemingly goes on for ever. As I have no iPhone (with its useful navigation system feature), map or geographical knowledge of the area I have no idea where I am or how close I am to the end. Mitakadai eventually appears (though I don’t know it at the time) and is much nicer and some koi (carp) can even be seen in the river that I have been religiously following for nearly four hours.

I don’t realise that Inokashira Park in Kichijoji is just round the corner though not literally. Its just before 1pm when I make it to the pond which is the source of the Kanda River. Despite it being a cloudy, windy day the park is quite busy with groups of people having their hanami parties under the sakura. 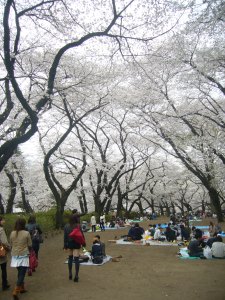 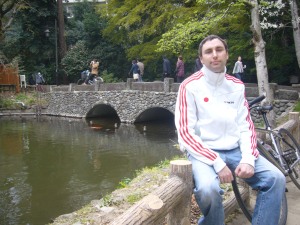 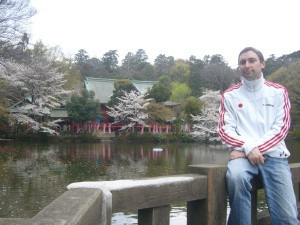 I take a short break, look around the temple and take some photos and then head off home. I don’t need to follow the river so closely going home but decide its best to do do as its all easy to get lost. 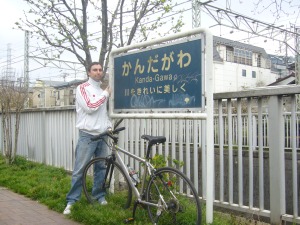 I am wondering how long its gonna take to get back and the cliched answer is of course too long!

15 Responses to Cycling Kanda River In One Day